Upset Watch Week 5 2020
After a stellar week 4, we're back to talk through the prime candidates to upset the odds in week 5. 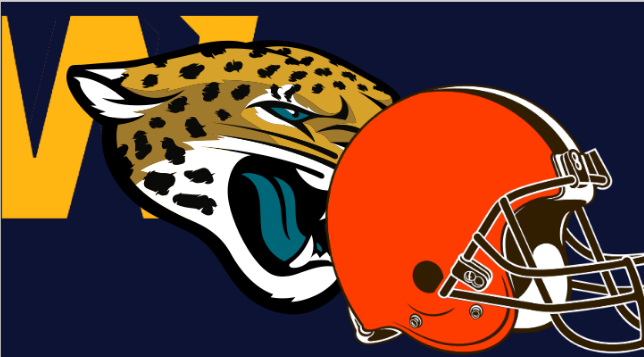 Last week was great - we got Philly, Cleveland and Minnesota to win straight up, which really was an amazing result. To give you some idea of what that means, a parlay on all three to win with Draftkings would have netted you $248 from a $10 stake.

Our methodology has largely been correct this season, with the exception of week 2.

Of course, as we said at the time, week 2 was historically very difficult to have predicted, but not being more than 1 game out on average is important. We've covered this in previous years, but there is a strong likelihood that you'll gravitate strongly towards the favorite naturally, which leads to some illogical decisions. That's why we write about our methodology here before making picks.

For example, last year we showed you a table we curate - it shows how in 2018, fans simply didn't pick underdogs to cover, despite the odds of an underdog covering the spread theoretically being even with the chance of the favorites covering. It also showed that Upset Watch was much closer to the real outcomes than the average across the hundreds of thousands of picks in our database by fans. 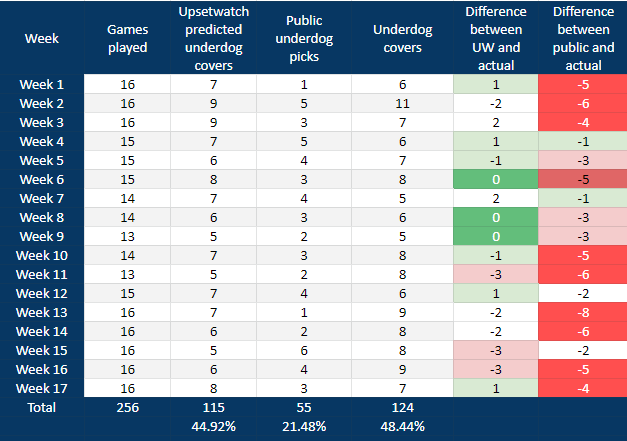 We'll update the current season as we go and I'm considering making these types of insights their own part of the site, so you can see them at your own leisure. What you can see though, is that not picking underdogs to win or cover will leave you pretty much guaranteed to be disadvantaged by around 25%+ vs picking closer to the average.

So what are we doing this week? Well, our table says 5.0 upset victories, with 6.4 covers by underdogs. Adjusting for Covid stealing 3 games at this stage, we'll take 4 upsets and 6 covers. We'll adjust when the impacted games become available.

We've also been big this season on breaking down wins and covers by their spread. Week 2 highlighted that when the spreads are big and 6.5 or more, the chances are the underdog is so bad that they aren't realistically going to win more than 15% of the time (currently 3-19 on the season), but when it's under 3.5, it is 50% this season (13-13).

We need to pick our battles and understand which games are likely to end in upsets.

This week presents some unique challenges - or what we hope are unique challenges - related to Covid-19. I've largely avoided addressing it in this column, but clearly the virus plays a role in what we're going to see this season, particularly in terms of games being played and the availability of key players. We'll cover those once the games are available, as currently at least 3 games are off the board.

The underdog will win these games outright

An interesting situation as the Jags come into town to face the Texans who have just sacked coach Bill O'Brien. The Texans rank 29th in the league in points scored, but that's still good for 20 points a game. The Jags average 23.8, but that's not the decisive factor here. The problem for Houston is a porous run game that is ranked last in the league. So far the defense also has zero takeaways too. Gardner Minshew is a QB who will take care of the ball well, play high percentage, low risk football and get the Texans on the back foot early. I really like this spot and think the spread is all wrong - possibly because people are hoping for a 'new coach bounce'

This is a risky one, but Carolina are playing well enough to go toe-to-toe with a Falcons team that has lost all confidence. You may be tempted to think the Falcons can just flex their offensive muscles and someday, an offense won't be able to hang with them, but the Panthers are... pretty good actually. They have Robby Anderson, a legitimate no.1 deep threat, Mike Davis, who has made Christian McCaffrey look surprisingly fungible, and Teddy Bridgewater playing confident, mistake-free football. Moreover, where the Panthers are weakest - run defense - the Falcons don't have the strength to take advantage. I think the Panthers can not only stay with Atlanta, but exploit the enormous holes in their secondary.

Hey you know how I feel about these two teams. The Colts have had one of the easiest starts to the season they could have hoped for, with anaemic offenses like Jacksonville, Minnesota, the Jets and Chicago. Sure, you can only beat what is in front of you, but the Browns have gone toe-to-toe with the Cowboys and average 39 points over the last 3 games. Even if we thought the Colts defense was worth a 30% reduction in points (a pretty huge amount) that would still see the Browns comfortably beat the Colts. I'm not sure Indy has a higher gear, but I suspect we will find out on Sunday.

Every week we take a team to win and your initial reaction will be 'HOW THE HELL ARE THE WASHINGTON FOOTBALLS GOING TO BEAT THE RAMS?'. You may remember this from me predicting the Eagles beating the Niners last week, or the Dolphins beating the Patriots last year, or the Eagles winning the Super Bowl, and blah blah blah.

The point is, Washington are... whisper it, not that bad with a better Quarterback than Dwayne Haskins. I also have some faith that Kyle Allen is the game manager they need right now. In 2019 he started the season with 7 TD's and no interceptions over his first 4 starts (where he went 4-0). There were bad games (three times he threw picks in a game) but overall... he was solid. The good outweighed the bad and ultimately, he knows the system and has won games in it.

The Rams are extremely shaky at the moment. They even flirted with complete disaster against the Giants and although there was never any real shot of New York scoring more than them, I believe that the WFT has a chance, a real one, of getting serious pressure on Jared Goff and causing the Rams enough problems that at worst, you should take them to cover.

The underdog will cover the spread, but not win the game

Spreads like this are just too much in a divisional game between these two. I'd perhaps understand it if the Chiefs were playing lights out, while the Raiders were the worst team in the league, but neither of those things are true. The Chiefs are vulnerable and in fact have looked liable to make mistakes for the first time since Patrick Mahomes took over. I feel like as good as KC are, there's room here for a close, low scoring game.

Again, the divisional nature of this game makes it a tough sell vs the spread. I think Cincinnati has enough about them right now to suggest they are not pushovers as this spread suggests. Sure Baltimore should win, but by 14 points? That's 2 scores against a team that will go for garbage time points and try to keep momentum up for the next game and blood their young QB further. Not to mention that the Bengals actually average 28.6 points per game over the last 3 weeks.

The favorite will win and cover the spread in these games

As a Bears fan, it's depressing knowing how this goes. Tampa are far from perfect, but they are simply too good to contain for a whole game. It's also super important to note that the Bears defense is the reason people are going to pick them, yet the Bucs outrank them in a wild number of categories such as run defense, sacks, turnovers... I don't trust Nick Foles and I don't trust the Bears against Tom Brady.

I can't see the Jets beating anyone right now. Ordinarily this would stand out as a potential target for winning, but after the way they played against the Broncos, I can't see them handling the Arizona offense, or troubling their defense with Joe Flacco starting.

This is a tougher game to pick than I thought. I've plumped with Pittsburgh even though I have reservations about their mentality after last week's odd semi-bye week. What this comes down to, however, is that Philly are much, much worse and particularly on defense, the Steelers are a cut above anyone the Eagles have faced recently.

An easy one - the worst offense in the NFL plays the best offense desperate for a win. As I alluded to in my power rankings this week, Daniel Jones is a big reason for this - he hasn't thrown a TD pass since week 1 and his passing yards per attempt is coming down steadily to the point where last week's YPA would have put him last in the league bar Jarrett Stidham. I don't love the Cowboys (who does...) but I think -10 is generous to the Giants.

The Vikings have improved considerably in recent weeks, but I don't believe they're consistent enough yet to overcome a strong Seahawks team. I suspect +7.5 would have pushed me to a Minnesota cover, but Seattle are strong enough to win by a touchdown. Do we need to bring up Kirk Cousins's primetime record too? The Seahawks are weakest vs the pass, but the Vikings rank 28th on offense when passing, while their strength (running the ball) is mitigated by a run defense giving up 75.8ypg on the ground. That's good.

I want to pick the Chargers here, and I think I'll regret not doing so. The Chargers are strong-ish against the run, but I don't see them being substantially better than the Saints in any major areas except passing downfield. New Orleans are not the Saints of old, yet despite that I find myself wondering if anyone is going to actually stop Alvin Kamara running wild and free. If they did, I think the Saints would lose quite heavily. His 7 TD's account for 50% of the Saints entire total so far this season. If you take him out of the equation, this is a very different team.

These games currently have no spread available due to the reasons below. Our initial take is provided, but may change due to player availability and/or Covid updates.

No pick here - let's see what the situation is, but I'd assume at this stage the game will not take place.

My gut says Cam starts, if that's true, I'll take New England. If not, I'd expect a much closer game.

I really like the Dolphins here, especially the 49ers are forced to roll with their backup QBs, as looks likely. If they start Jimmy G (and he's healthy...) I would reassess that, but I would likely still suggest taking MIami here given the uncertainty around the 49ers QB situation.