Our bumper Super Bowl guide takes you everything you need to know before the big game. From prop bets to the game winner, it's all inside. Let's not give the game away, but you may like our pick... 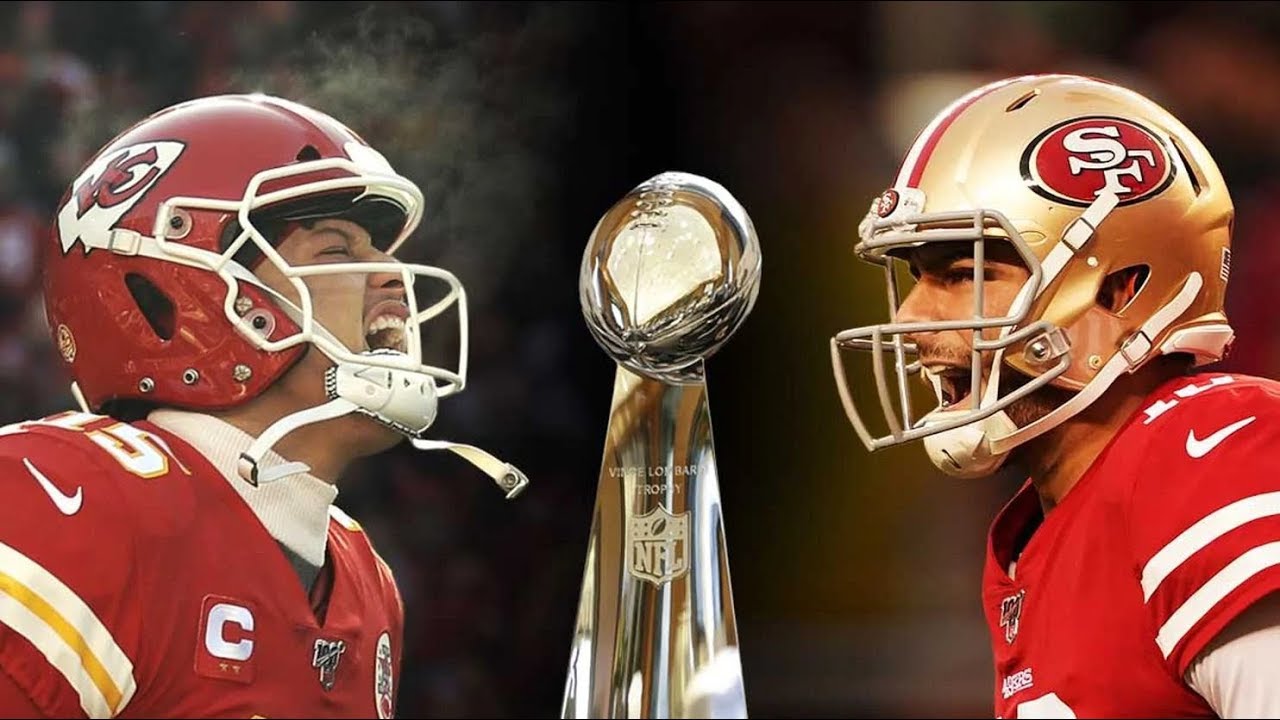 Welcome to our guide to this year's Super bowl, all the picks, predictions, prop-bets and upset stats you need.

Lots to get through in our final installment of the season, so rather than a big pre-amble, we'll cover it all off in the sections below. If you want any personal advice, hit the intercom button at the bottom of the screen and ask!

Bourne is one of my favorite props, and there's a reason he leads out this column. This season, the Niners have targeted Bourne 10 times from inside the 25, leading to 6 TDs. What's perhaps most impressive? The teams he did it against. In big games against Seattle, New Orleans (twice) Minnesota and Green Bay (the latter two games in the playoffs), Bourne was a huge weapon for the 49ers and an overlooked part of their gameplan by opposing defenses.

Of course, opposing defenses are lazered in on George Kittle, but that doesn't make Kittle more likely to score. He's been targeted 28 times, for just 3 TDs inside the 25 yard line. It's a lot of opportunities, sure, and Kittle isn't a bad selection, he's just more likely to make the catch and be the focal point of 3 Chiefs defenders.

Bourne is the value bet here.

Coleman is the Niners' choice around the goal line when he's healthy. Within the five yard line this season, Coleman has 10 carries inside the 5 yard line to Raheem Mostert's 5, and Coleman has scored a TD on 50% of those plays. so if he's healthy - and all indications are that he is 'good to go' - then he's the most likely back to get carries in that area.

Coleman has also gotten stronger as the season has worn on, averaging 4.5ypc in the playoffs vs 3.97 in the regular season. If he's healthy, he's going to get enough carries to be a big factor in this game. Again, Mostert will be the trendy pick, but Coleman could be the most effective with the ball in his hands and with 8 pass targets inside the 10 this season, is also one of the Niners' top receiving threats in the red zone.

The narrative about this Super Bowl is around the all-world 49ers defence, and of course, it's formidable, in fact it really is as good as we have seen this season, but it does have weaknesses.

One such weakness? Big plays. The Niners gave up 9 passing touchdowns over 20 yards this season, and if you're thinking 'That doesn't sound too bad!', then I am here to tell you that it is, in fact, bad. For reference, here are the playoff teams this season, and their 20+ yard TD's allowed. 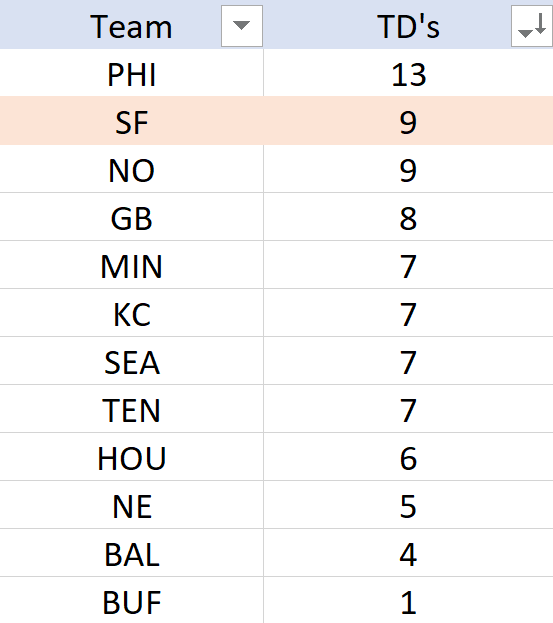 It's not great, and expand on the teams you compare for context and you realize that the Niners really do give up the deep ball more than most teams. The Redskins (10), the Bucs (11) and the Cardinals (9) are all in the same ball park.

So whatever the outcome, it's almost certain that the Chiefs will look to get Hill and Hardman, the two fastest players on the field, the deep ball. Hardman has 13 deep ball targets with 6 TD's this season vs Hill's 29 for 4 TD's, so it's really more a question of how creative coach Andy Reid will be in getting Hardman involved. Given that he can be expected to give Hill at least two shots though, a Hill bet would not be a bad one.

The Chiefs are always liable to make Kelce a huge part of their offense, but he often does it in understated ways. For reference, Kelce has beaten 76.5 8 times this season, but what I'm most interested in is his role in this offense.

It's an important role that Kelce plays in freeing up Hill, Hardman, DeMarcus Robinson and Sammy Watkins to make big plays down the field. This season, he's been targeted an average of 8.44 times per game, with an average per reception of 12.7 yards. If he catches every ball that goes his way on Sunday, he will likely have a 100 yard game.

What the bookmakers are essentially wagering on here is that Kelce will not have many catches, rather than not having many targets. I'm a big believer that one of the key metrics for an over/under is 'opportunity', and Andy Reid loves subterfuge. In week 17, for example, Kelce received just 5 targets on a reduced snap count. You think it's an accident? He was then targeted 12 times in the playoff win against Houston, posting 134 yards.

With Kelce posting just 4 targets last week, I think he'll once again be the guy the Chiefs go to when they need to move the ball incrementally, forcing the safeties to account for Kelce over the middle, and luring them away from the deep threat WR's.

I know what you're thinking here, this is Chiefs offense aganst Niners defense, and it's who wins that strength vs strength battle.

Sure. It is to some degree, but it's at least partially about how many points the Niners can actually score to keep pace with the Chiefs. Whether it be defensive points or offensive points, they cannot afford to be inefficient, as the Titans will attest to.

So what does the stats sheet say? Well, the good news for San Francisco is that they have generally been at their most effective against teams (like the Chiefs) who don't concede that many points.

In their ten most difficult games this season (based on opponent average points allowed) they scored an average of 12 points more than their opponent had previously allowed to other opponents, with just one touchdown from a defensive turnover. In other words, when the defense was expected to challenge them, the Niners offense wildly outperformed expectations. 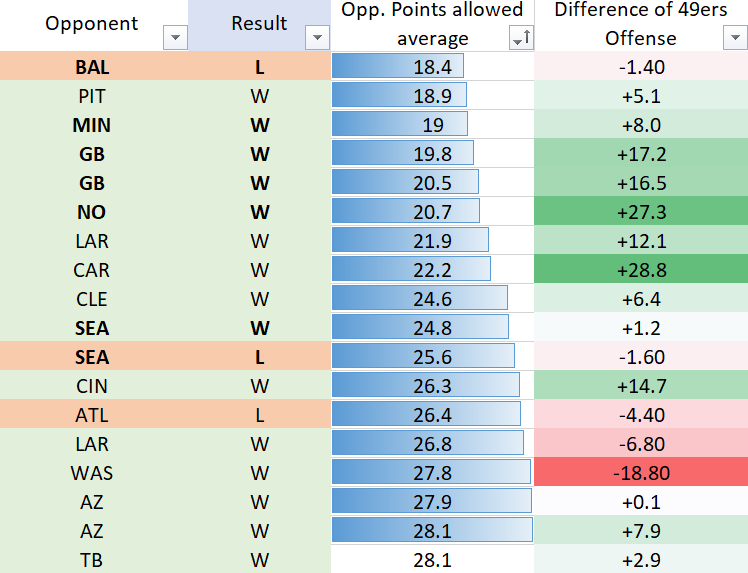 If the same pattern continues on Sunday, it would lead to a 32 point game for the 49ers, but the biggest question against the Chiefs is... well, will 32 be enough? 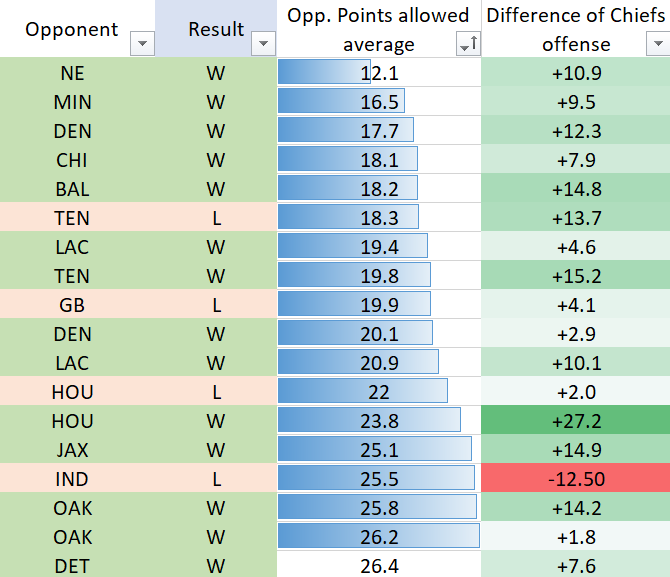 Well, given the prevailing narrative that the Super Bowl is going to be decided on how high-octane the Chiefs are offensively, you might be surprised to find that actually, as impressive as they are, they aren't more effective than San Francisco in this regard.

Kansas City average an impressive 9.6pts per game more than their opponents give up on average, but because the Niners give up just 18.9 points each week, the Chiefs, we project, will actually fall short with 28.5 points to the San Francisco 32.2. 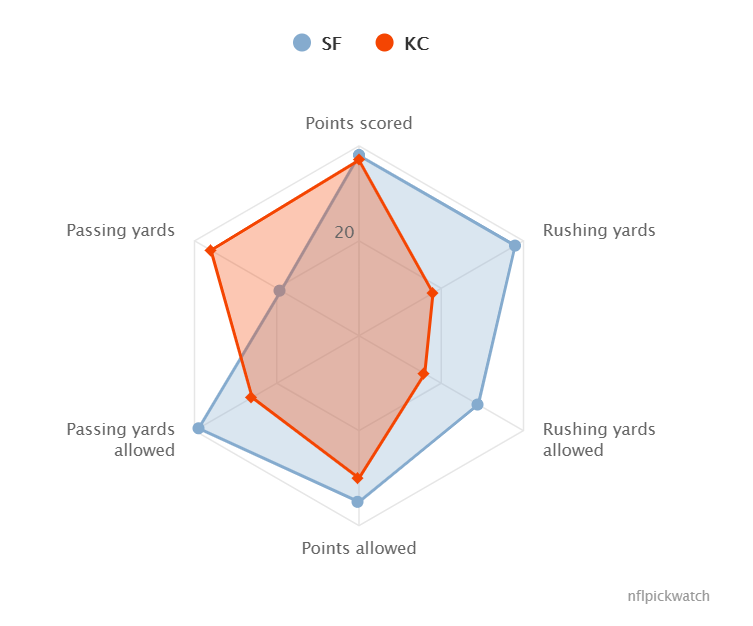 Of course there are a lot of people picking the Chiefs, but the narrative of a weak 49ers offense is one of the driving forces of that. Sure they rank 21st in passing yards, but when you rank 2nd in rushing yards and 1st in rushing TD's, it's not as hard to overcome middle of the road QB play.

Let's not mince words, the Kansas City defense may be good, but it's not in the same ball park as the Niners. That running D in particular is such a glaring weakness against a team that averages over 150 yards a game on the ground, that if the Niners get it going, the Chiefs may find themselves on the receiving end of a steamrolling. 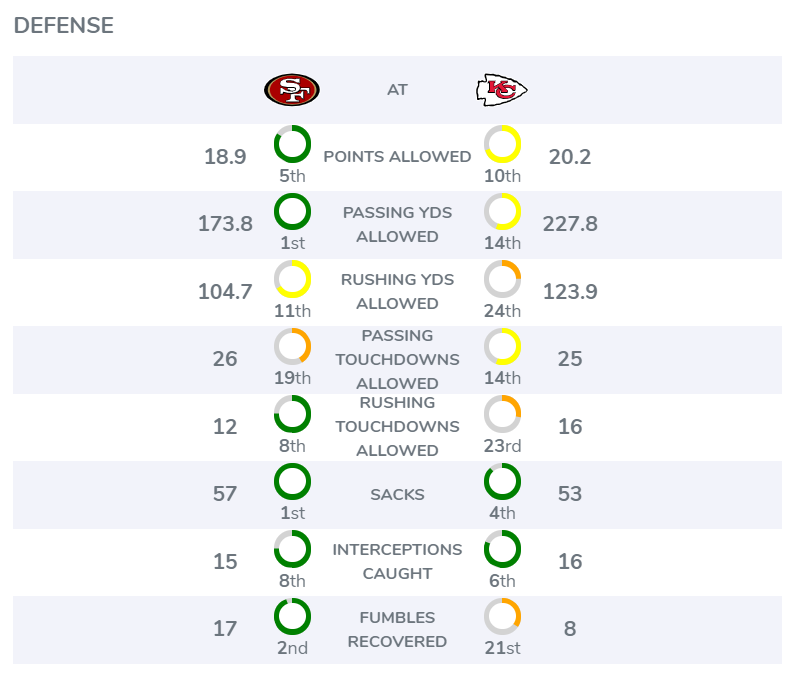 And what does it mean for the Niners? That they get to play the game that has led them to this point, the one that means holding the ball longer than opponents (4th in time of possession) and grinding the Chiefs down. 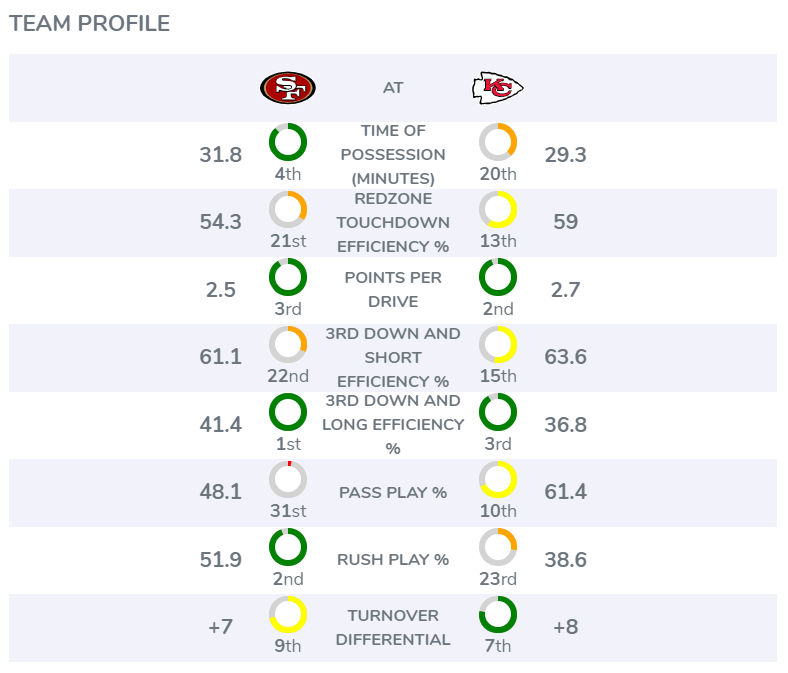 I love this game, it's a perfect ending to the season and in many ways, the best news is that either team will be a worthy winner, but the Niners are an underdog in name only.

The consistent media narrative of a one dimensional offense is unfair. They run because teams can't stop them, not because it's all they can do. Tell the Saints, the Cardinals, the Bengals, the Seahawks and the Steelers that Garropolo can't throw. He put up over 275 yards in each of those games and posted a 5th ranked 27 passing TDs in the regular season.

Patrrick Mahomes is a phenom, and if you were building a fantasy franchise, he'd be the first pick of every team today. In the postseason he has been the NFL's best player, but the reality? He played against Houston, one of the worst defensive teams in the league, and Tennessee, who were in the middle of the pack defensively. Those teams aren't as instructive as the Chiefs performances against the best in the NFL, where they were not quite as effective as their opponent on Sunday.

For that reason, our pick for Super Bowl LIV is:

We hope you've enjoyed Upset Watch this season. We have some exciting new games and content coming for 2020, which we think you'll love.

They'll be available for you over the offseason to try. We're currently asking anyone who wants to run a private pool to get on a mailing list for easy access. Whether it's friends, family or just a desire to run a small pool as commissioner on our site, we'll keep you informed over the Spring.

For more information, get in touch via our live chat.