Welcome to Upset Watch’s wild card playoff preview. Last week we correctly predicted a Miami Dolphins win against New England, which of course makes us the only people to have done so in the last two decades. This week, we’re going to do our best to work out which of the wild card contenders has the best chance to win... 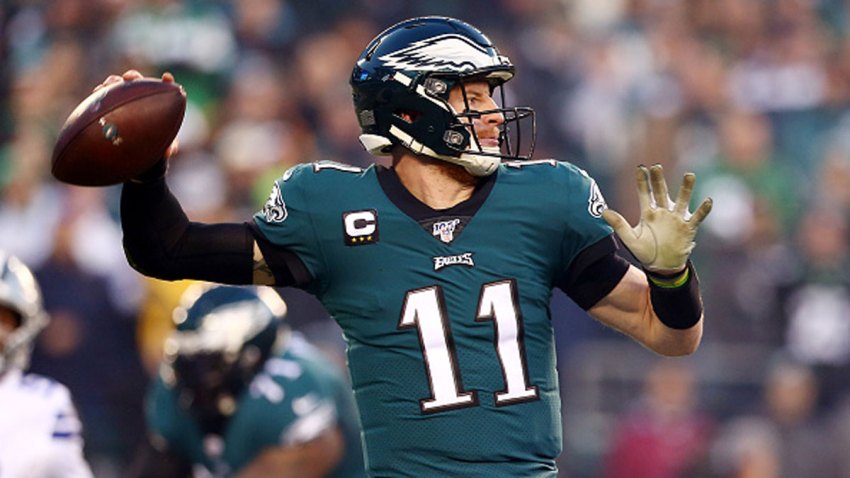 Last week we correctly predicted a Miami Dolphins win against New England, which of course makes us the only people to have done so in the last two decades. This week, we’re going to do our best to work out which of the wild card contenders has the best chance to win against the odds and progress towards the Super Bowl. 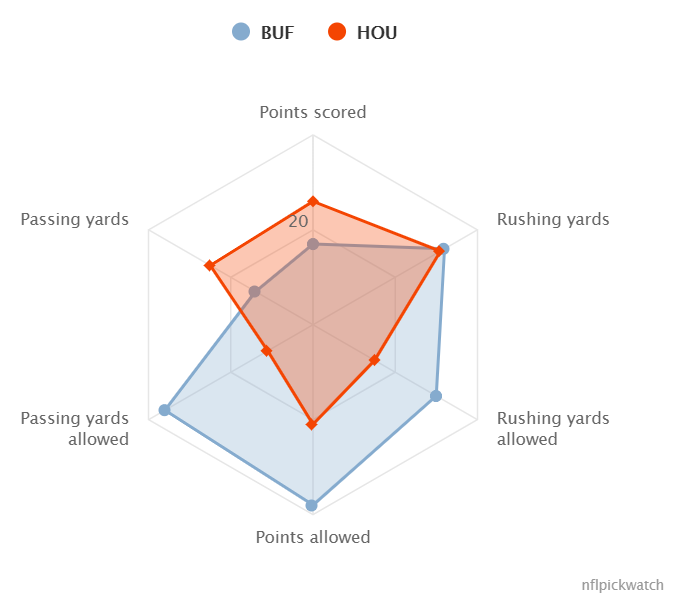 This is a good matchup for the Bills. They’ve been consistently good at running the ball via both Devin Singletary and Josh Allen over the season, and like the Ravens, have found a successful way to make this their primary way of winning football games. 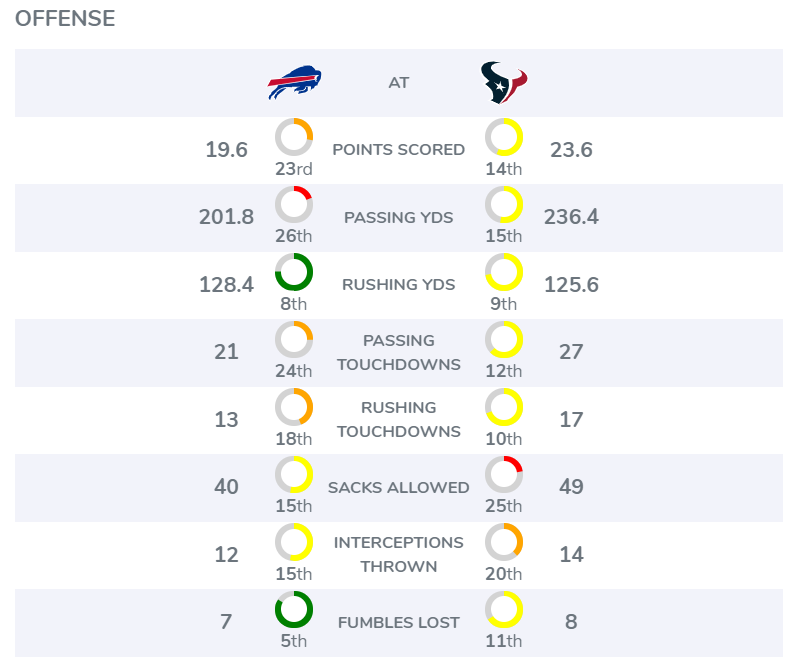 Unlike the Ravens, they’re not so hot in the passing game, but this is all about defense. The Texans have a good all round rushing and passing game. That’s good. The Bills have a hugely efficient defense against both run (10th in the league) and pass (2nd) though, and give up just 16.2pts per game, good for second in the league.

The Texans? Not so much. They’re a travesty on defense and I don’t think the addition of JJ Watt (assuming he really is healthy) will dramatically improve their 25th ranked rushing defense and 29th ranked passing defense. They can win without a defense (as crazy as that sounds) however, and have done so more often than not all season long. 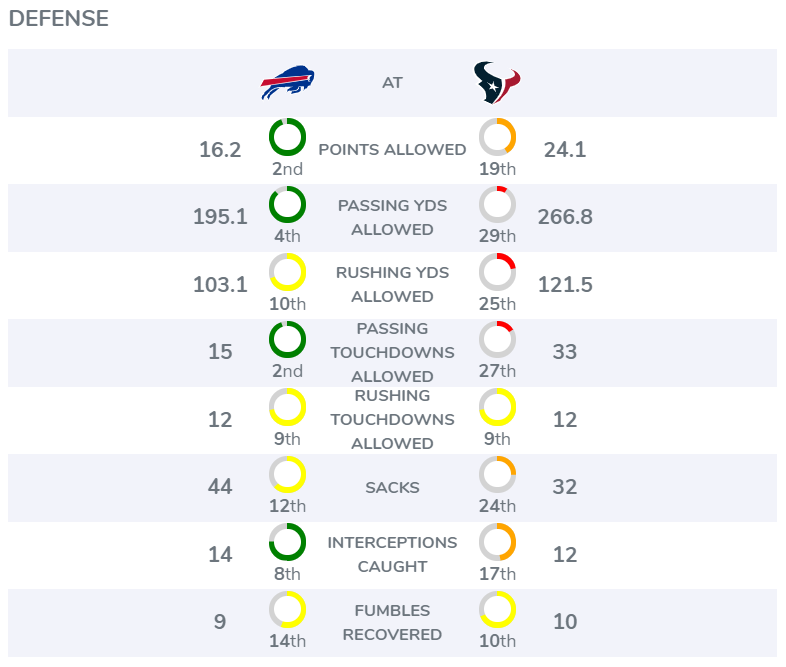 Where do the Texans have an advantage? Well they score when they get in the red zone, and that is critical. We saw in week 16 how when the game was on the line, the Bills just couldn’t get it going in the most crucial area of the field. They score 56.8% of the time vs the Texans’ 64.2%. 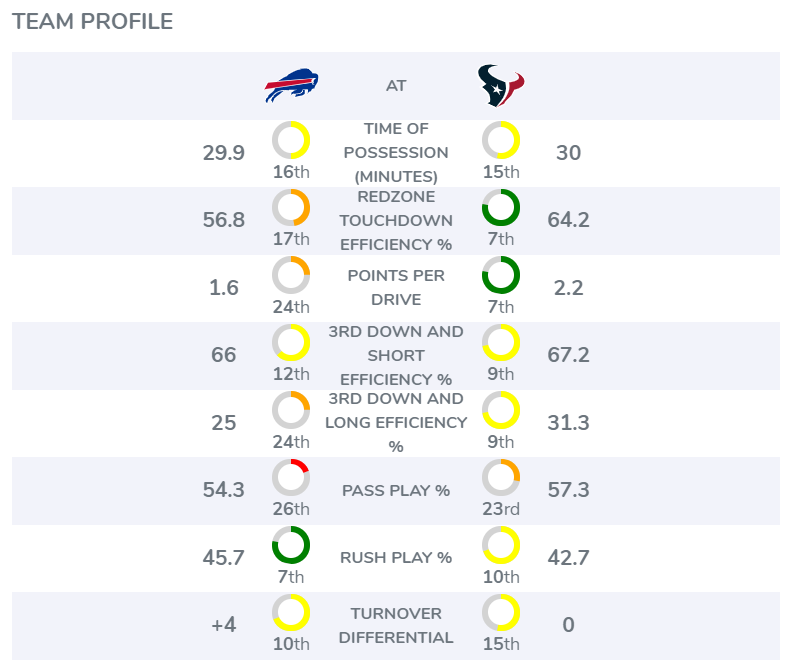 What is crucial to me is that the Bills do not get into scoring positions nearly enough to counteract the Texans’ ability to move the football. The Bills take over (like most teams on average around the 28 yard line, but they average just 28 yards per drive too, meaning that on average, they drive down the field and stop at around the 43 yard line, or as we might call it, a big old boot of 60 yards. The Texans? They get to the 37, and they therefore end on average, in field goal range. Just.

Basically, I think the Bills can stop the Texans a lot, but I’m not sure they can stop them all of the time when it really matters. They move the ball well, and even more importantly, they score when they do. That is who the Texans are. 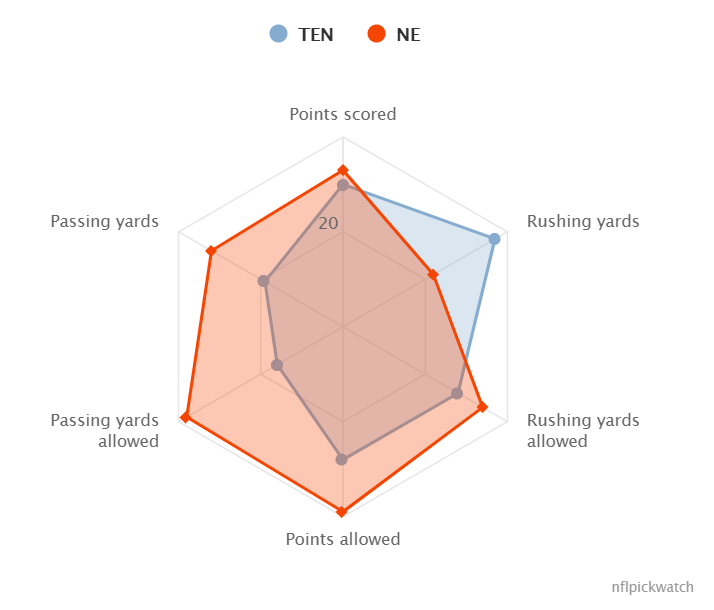 The trendy pick in this game is Tennessee, which always makes me wary. The Titans are dramatically improved, of that there is no doubt. The difference between Marcus Mariota and Ryan Tannehill at QB is so great that it is fair to say they are simply two completely different teams.

But will it be enough against the Pats?

A lot of the media stuff around the Pats is driven by the same innate desire we all have to see favorites crumble and fall after decades (it’s been DECADES) at the top. Are they good this year? No. Are they still around the very top in every defensive category? Yes. They’re also good everywhere the Titans don’t want them to be and it’s an incredibly bad matchup for them on that basis.

This is really strength vs strength, with a top 5 Titans offense against a top 5 Patriots D. In fact, the Pats rank first in multiple defensive categories. 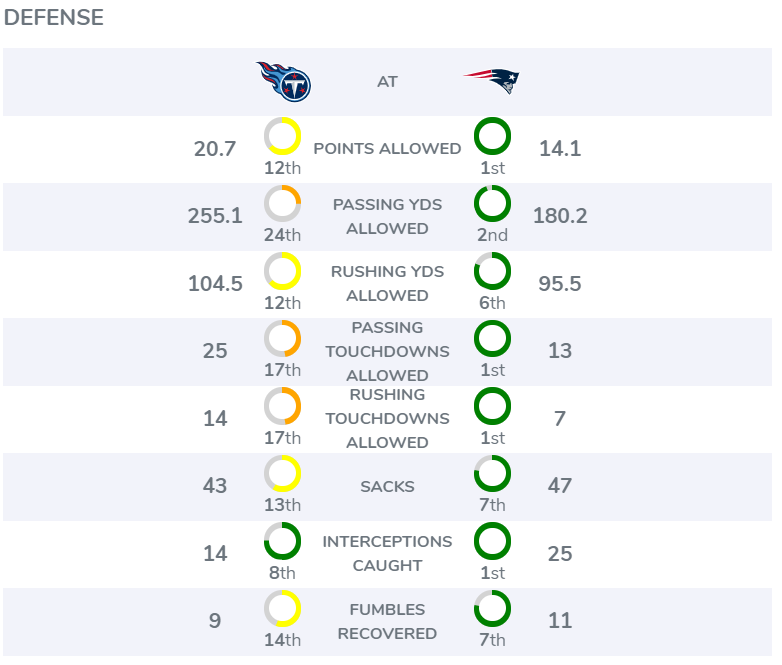 Something that greatly interests me is that the Titans are massively reliant on Derrick Henry. He is a huge factor in their short yardage situations, but there are more worrying signs for the Titans. The Pats control the ball for most of the game, they have a hugely balanced attack and are top of the NFL in turnover differential. In fact, they have a +21 turnover balance this season, it’s just huge. 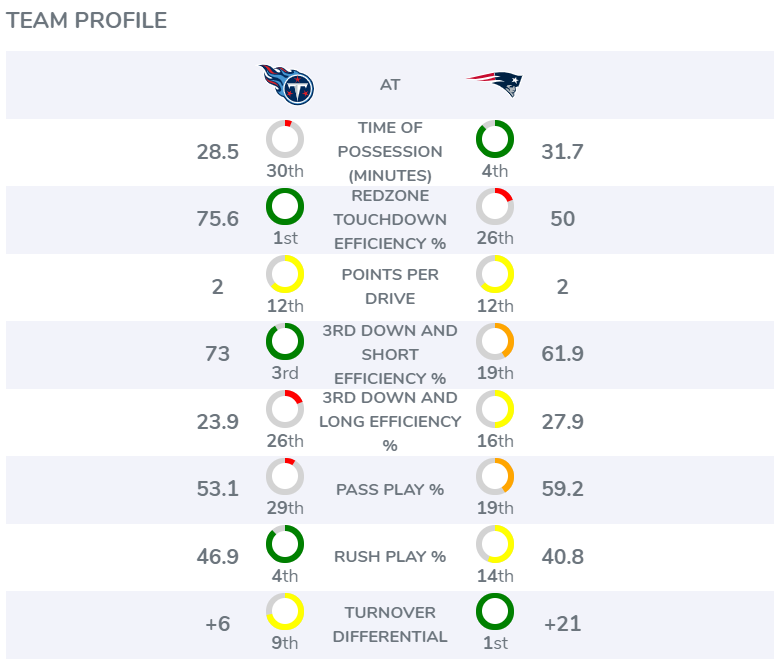 But because of the way Tennessee have played, I think they’ll keep it very, very close. 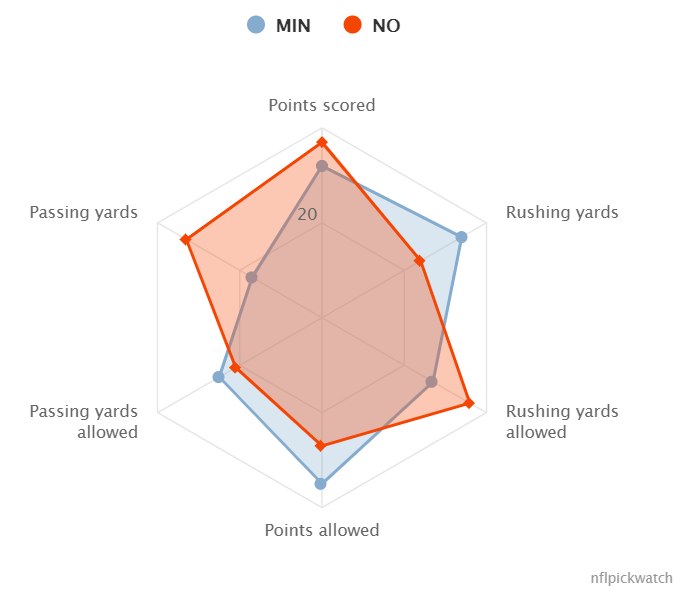 A replay of last season’s most controversial game? Yes please.

I don’t think you can overstate how good both of these teams are. They are two phenomenal offenses that are complimented heavily by their defenses in ways that make this matchup really interesting.

The Saints have the best of it. They’re 2nd in passing TDs and it really is the focal part of an offense that passes nearly 60% of the time. The Vikings could not be more different. They rely on the rush and run it 50% of the time, relying on Dalvin Cook to grind down opponents. 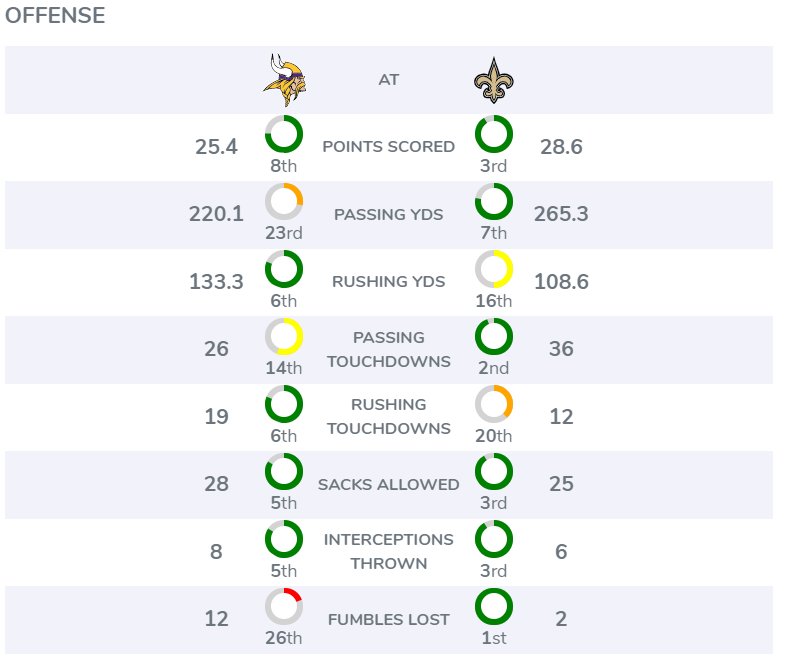 They’ve been able to turn to his backups at times, but I’m very cautious that the Saints are one of the strongest run defenses in the league. Cook’s injury concerns are top of my list, because he’s a massive part of this offense.

The Vikes have won 6 games when Cook has ran for 100 yards (or 97+ in the spirit of not placing arbitrary numbers on what constitutes a good game) and 2-3 when he doesn’t get anywhere near that many. So how likely are the Saints to even give up a 100yd game on the ground? Well it’s unlikely, for one very important reason.

They haven’t given up a 100yd rushing game all season long. 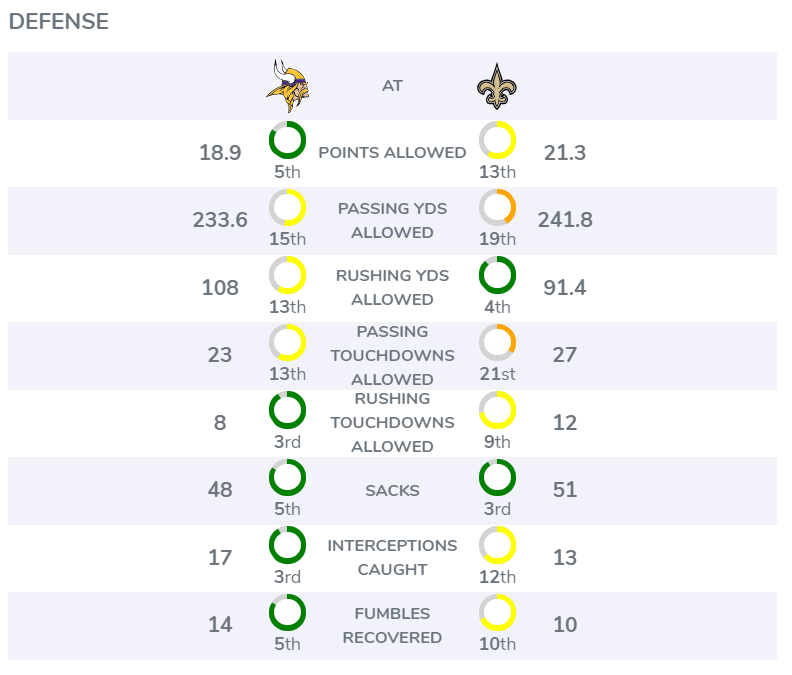 The highest? 83 yards all the way back in week 1, and since then the most they’ve given up is just 69 yards against Raheem Mostert and the 49ers in a heartbreaking loss. Either way, sure, it doesn’t guarantee them a win against everyone, but against the Minnesota Vikings, I think it will, and I think it’ll also mean a win vs the spread 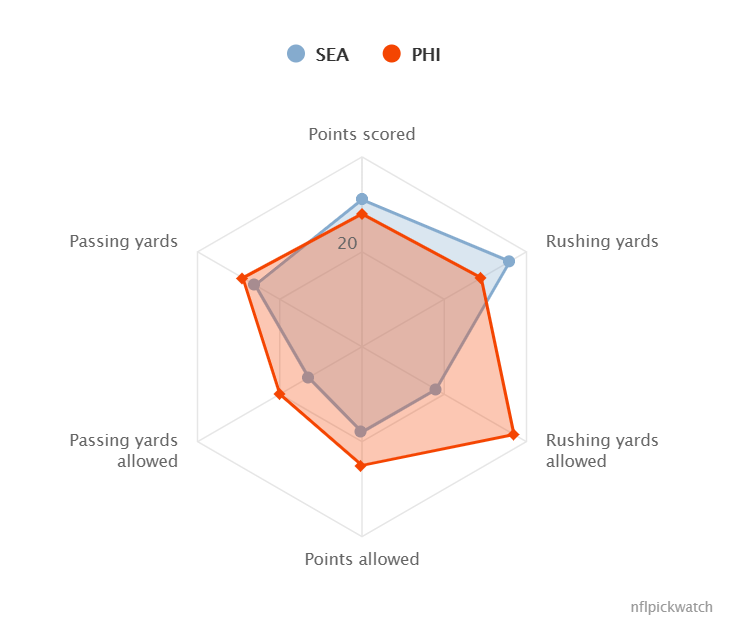 We’ve reached this point with no upsets straight up and only one underdog cover. Can the Eagles change that?

Well… it’s not impossible. The Seahawks have been extremely poor in the last month. They have lost against their entire division, and slightly unconvincingly beaten the Kyle Allen-led Panthers in a game that should never have been close. The Panthers scored twice in the last five minutes and were deeply reliant on their running game to take them over the line.

Scarily, their lead back Chris Carson is done for the season, and that means big problems for the Hawks. Sure, Marshawn Lynch is back, but are you really going to run Marshawn regularly against the league’s third ranked run defense? Really?

The Seahawks were a perfect 8-0 when Carson had over 80 yards this season, and they ranked 4th on offense in rushing yards. It’s a huge part of their gameplan that allows Russell Wilson to thrive. 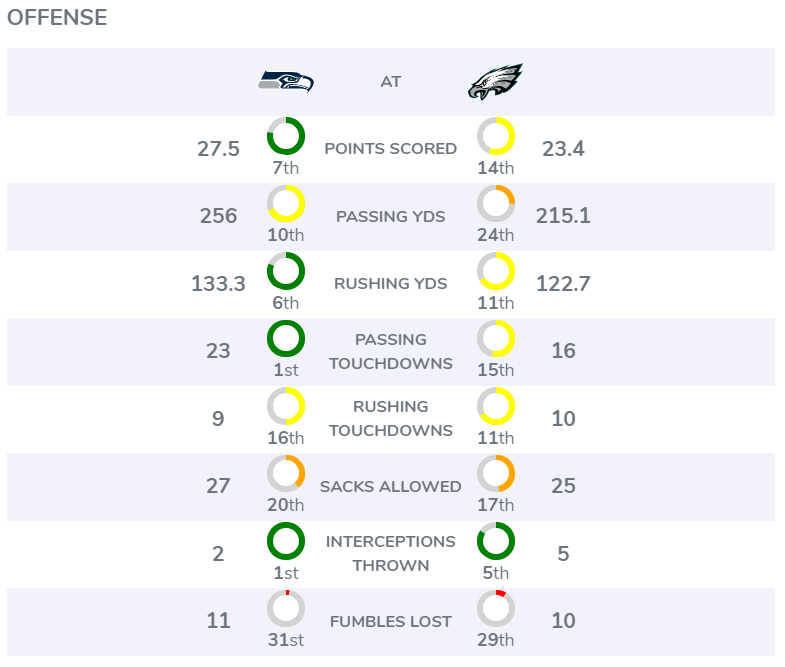 But can the Eagles take advantage of this weakness? They’re a solid but slightly unspectacular offense who can do everything pretty well, and they’re not reliant on any one thing. They were even able to overcome the loss of their best receiver, TE Zach Ertz last week, which they’re going to need if they plan on beating the Seahawks. Seattle are extremely vulnerable to teams putting up points on them of late, giving up a lot of points against teams struggling to score.

Meanwhile, the Eagles come in on a 4 game win streak averaging 28.4 points per game.

There is one other x-factor in this game… it’s a repeat of week 12’s matchup between these two teams. In that game Chris Carson had just 26 yards, but unfortunately for Seattle, they still did their best work on the ground, with Rashaad Penny putting up 129 yards.

Russell Wilson took 6 sacks in a low scoring game. I think the Eagles are much improved since that matchup though, and they have a slight advantage on Sunday.