We’re back with another look at the playoff upsets, this week, there are more potential upsets in the works. We’ve also got site news and a glimpse into our future! 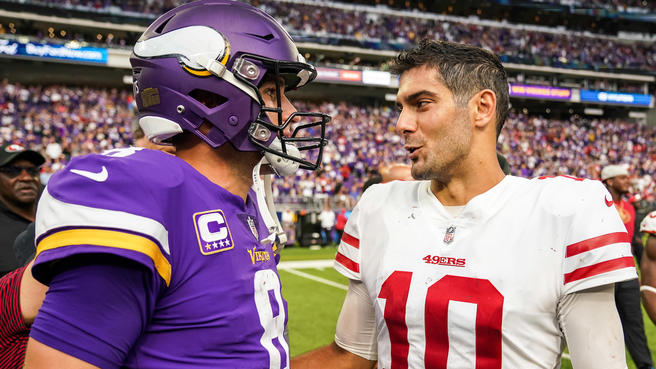 The Wild Card round has been and gone, and now we're left with those teams that don't have 40 year old quarterbacks.

Brady, Brees, McCown... the whole gang were partying like it was 2003. What a world that would have been, if they'd all made it through. Instead, it's Mahomes (cheers) Watson (punches air) and Jackson (screams like the Beatles just landed). Oh and Kirk Cousins (one person clapping).

Before we get to the picks, some site news! You may have noticed if you visit our game hubs regularly that we have a new addition - WEATHER! If, like me, you're a believer in the influence of Mother Nature on this here game, then you'll be happy to know that we now have a forecast available in each header of each game, and it updates every hour up until game time!

You can see it right in the middle between the two team logos, and if you move your mouse over it, you'll even get a bit of a description too.

This is just a small change that we're making, but I'm really excited about our spring and summer developments this season.

Whether you're looking for information on your team, an upcoming matchup, or you just want to pull together a bunch of stats and keep track of them over the year, or join up stats that don't ordinarily get housed together (offensive and defensive stats for example), we have made an easy-to-use yet powerful way of keeping everything you need in one place.

So if you love stats, you're going to love the next 9 months on Pickwatch. If you're interested in knowing more, hit us up using the intercom button in the bottom right of the page, and we'll add you to our beta testing list.

Now on with the picks! 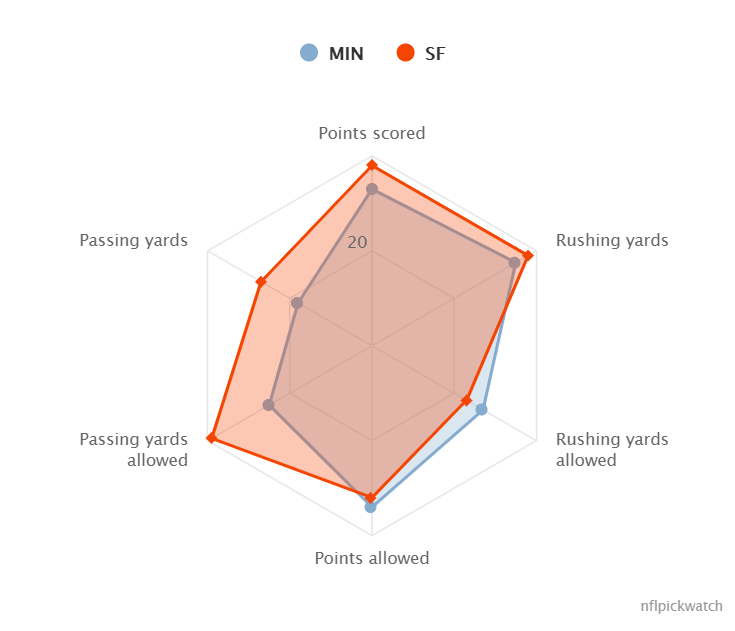 This should be tricky, but from an ATS perspective, it really isn’t.

7 points is far too big a margin for two of the best offenses in the NFL, and two of the best defenses. Sure, the Niners are at home, but there are a number of reasons why we’re picking Minnesota to cover.

First off, there’s the Niners, who have won one game against a playoff team by more than 7 points all season. That was against Green Bay, where they stomped the Packers 8-37 at home in a blowout. Representative of the season for them? Not really. They have won many of those games against playoff teams, but never in such convincing style.

They’ve beaten Seattle and New Orleans (the former when they were in particularly banged up state) and done it by a couple of points, and while neither win is to be sniffed at, they haven’t been the type of blowout that Vegas is suggesting here.

Also pertinent? The Vikings have a strong run game which is pretty much the only place that the Niners D is not exceptionally strong. When Minnesota are strong on the ground, they win. We talked about it last week and about how unlikely it seemed that New Orleans would give up that 100yd rushing game with a top 5 defense, and yet the Vikes managed to get Dalvin Cook 96 yards rushing and 36 yards receiving. They also gave up further yards to Alexander Mattinson, but regardless, the principle is simple: When Cook gets going, so do the Vikes.

There is one other reason: The Vikings defense. 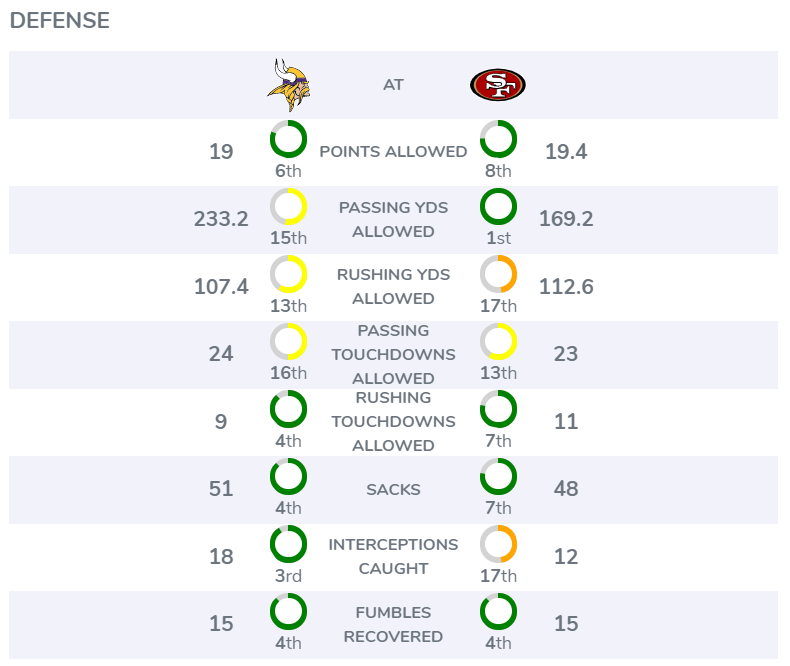 Although they aren’t brilliant at stopping teams getting yardage, as we saw last week against the Saints, they are good at punishing them for mistakes, and stopping them when it counts. The Vikes have a 6th best 19 points allowed on average this season, and rank top 5 in sacks, interceptions and fumbles.

We pointed it out towards the end of the season, but the Niners D very much lived on reputation as far as turnovers in the second half of the season. At one point they had a 7 game stretch without an interception, and that really isn’t something they can afford against the Vikings, who can be calamitous with turnovers, but rank 5th in the league with Kirk Cousins throwing only 8 INT’s all year.

I think the 49ers will squeak this one, but it will come down to having a better field goal unit more than anything. Of all the games this week, this one is the one where I’m closest to taking an outright underdog win. 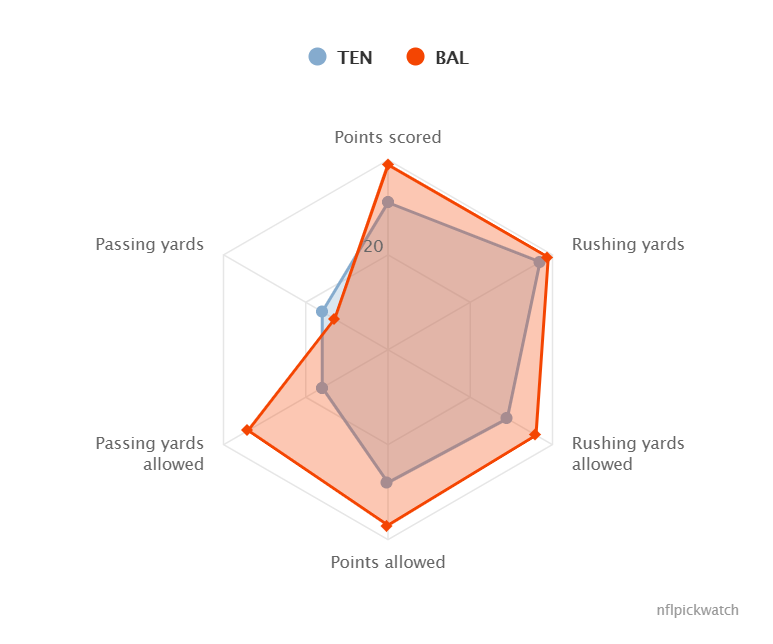 If you thought the Niners at -7 was a big spread, check this bad boy out…

First, the obvious: Baltimore scores an incredible amount of points. They’ve covered this spread an incredible 9 times this season against opponents as good as Houston, New England, Seattle and Pittsburgh. And they’re on a solid upward trajectory too. 8 of those blowout games have been from week 7 onwards.

But the Titans have had a similarly big end to the season and we can’t discount that they’re actually a huge threat to score more points than their average, which is brought down considerably by the average points scored when the team had Marcus Mariota under Center. With Tannehill, they averaged 27.6ppg in the regular season and of course, defeated the Pats 20-17 last week to give Tannehill a round 27pt average this season. 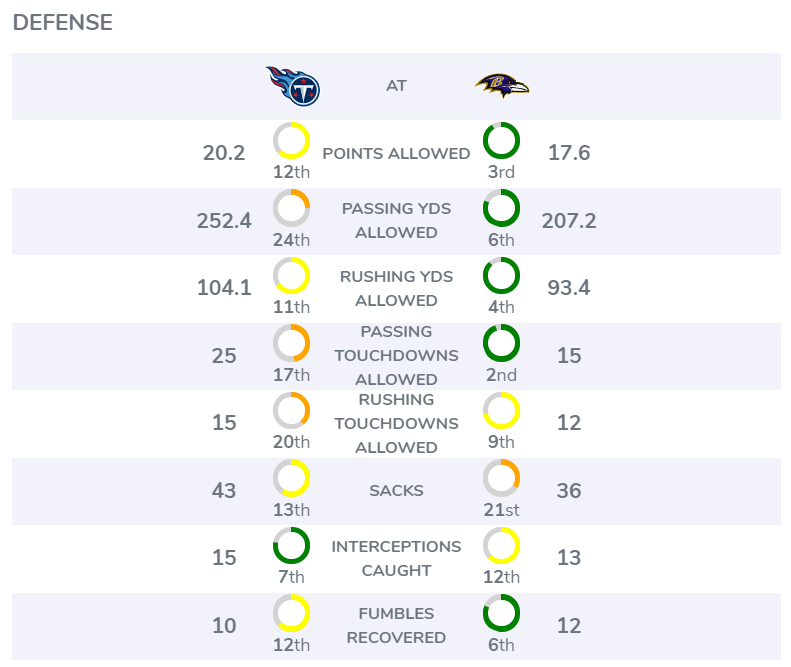 And there is hope. The Ravens have been impressive, but when they’ve come up against defensive teams, it’s not always been a walk-over. Buffalo held them to a 7 point margin, San Francisco to 3, and Pittsburgh also to 3. There were also a couple of games early on against Arizona and Cinci where they won by 6 points.

So the problem we have is… how likely is a blowout? Of course the Titans are underdogs because the Ravens are the best team in the NFL, with the best player, and the most capacity to destroy opponents in ways they have no chance of defending. I have no doubt that if the Ravens put up a 40-burger, that the Titans will lose heavily, but the thing is, the Titans haven’t done that all season. The closest was against New Orleans, but they still put up 28 points in a 10 point loss.

They also have the league’s best running back (who’d have said that in week 8?) and Derrick Henry’s style of play may be the factor that keeps this game scrappy. The Titans rank 1st in redzone and 3rd and short efficiency, which means that while they don’t necessarily have a shootout style offense, they can keep things tight by changing how opponents play the game. 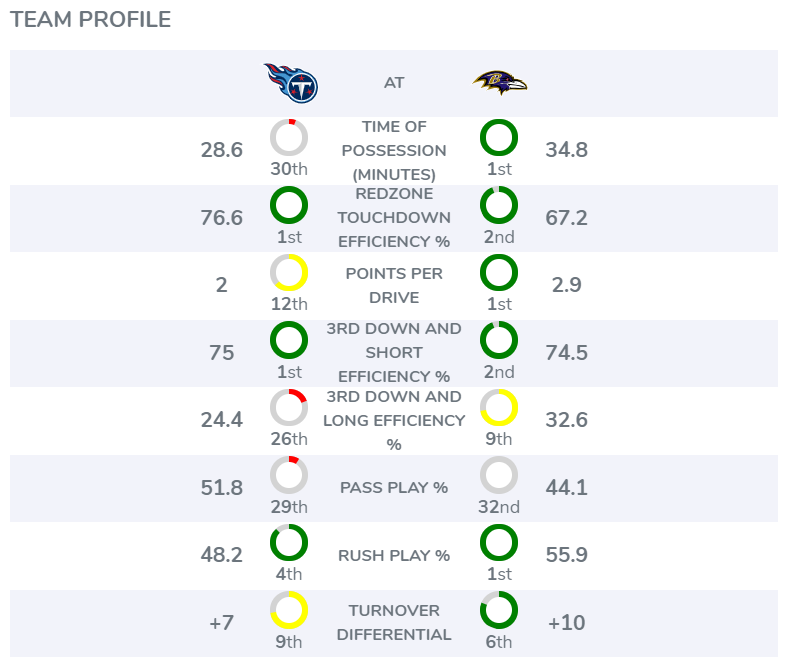 The Titans D has also had some success against running QBs. Pat Mahomes and Deshaun Watson have both lost to them this season (albeit the Texans did win one game) and while they did lose to Josh Allen in week 5, that was with Mariota.

This one is tough. That spread is simply too big given these two teams’ histories this season, and while I again think the Ravens will ultimately triumph, a +10 playoff bet is a good one. 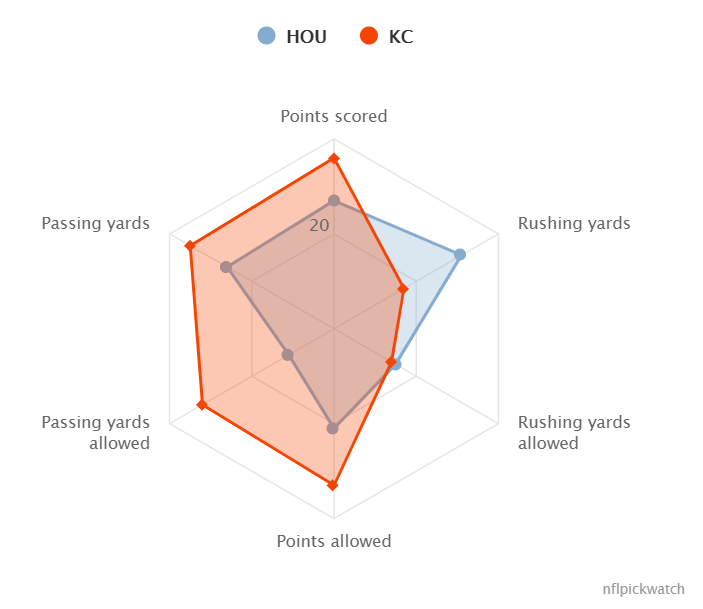 You may be looking at some of these monster spreads and thinking they are unusually high, but they’re really not.

The average spread in divisional games over the last 6 years has been 7.08pts, and this year it’s 7.75. Higher than average? Yes, but not by an exorbitant amount. In fact they’re not the highest average in that time period, as 2014 had a crazy average of 8.8 points going to underdogs.

But this is a really interesting one for two reasons.

First, the elephant in the room: Houston actually beat Kansas City back in week 6 in a sunday early afternoon slot. What’s changed since then to give the Chiefs a 9.5 point advantage? Well, they’ve certainly improved, but also, the Texans have regressed quite badly.

Back in week 6, as you can see from our game hub from the time, they were better in almost every way. They scored more points, they allowed less, they were better on defense and they had the type of efficiency that marked them out as a potential playoff team, but their defense in particular stands out as the worst in the playoffs at this point. They’ve gone from converting 90% of their 3rd downs in weeks 1-5, to a season average of 65%, good for a mediocre 13th in the league.

Meanwhile, on the opposing side, the Chiefs have become a quiet defensive powerhouse in that time. They’ve become top 10 in key metrics like points allowed, passing yards allowed, passing touchdowns allowed, and interceptions. Their biggest weakness is the run, where they are anaemic on both sides of the ball, but there is one thing that gives the Chiefs the best chance of a big blowout. 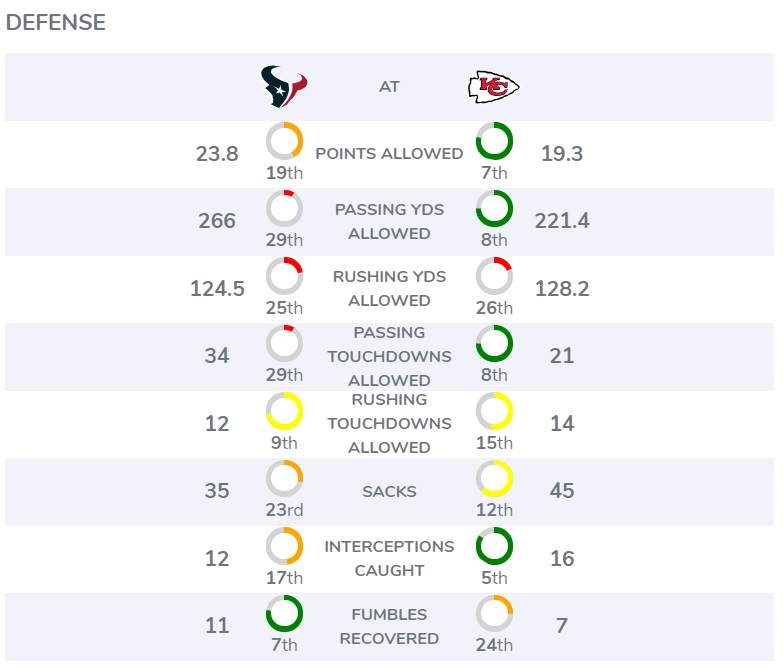 The Chiefs are one of the best passing teams in the league, and the Texans can’t defend the pass. At all. Seriously they’re 29th in both yards and touchdowns allowed, and they don’t get to the QB or take the ball away with any regularity. Sure, JJ Watt is back, but they struggled last week to beat Josh Allen, and that narrow squeaked cover just didn’t tick all the boxes necessary to show they can beat a fully fledged Super Bowl contender like Kansas City. 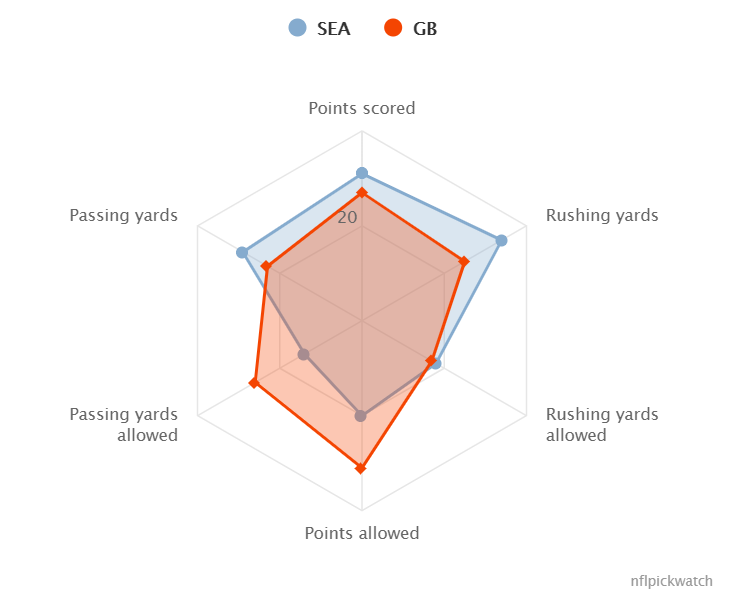 This is it, the close one. The one everyone will struggle with. Right now, as I write, the Packers are 65% favorites on Pickwatch with the experts, and that is pretty much in line with where I am.

A huge modifier in this game will be the cold. Sure, Seattle is cold, but Green Bay is a different world when that chill sets in, As you can see from our new forecasts on game hubs, the Seahawks are in for a crazy 24 degrees (-4 in real money) with the potential for snow later in the game.

I think the snow and even the cold, gives Green Bay a huge advantage, particularly given Seattle#s already glaring weakness on defense. I just mentioned the Texans having the worst defense left in the playoffs, but Seattle really did try to run them hard for that award. You could argue that while the Texans are ‘just hopeless’ versus the pass, the Seahawks somehow manage to be ‘quite bad’ against everything. 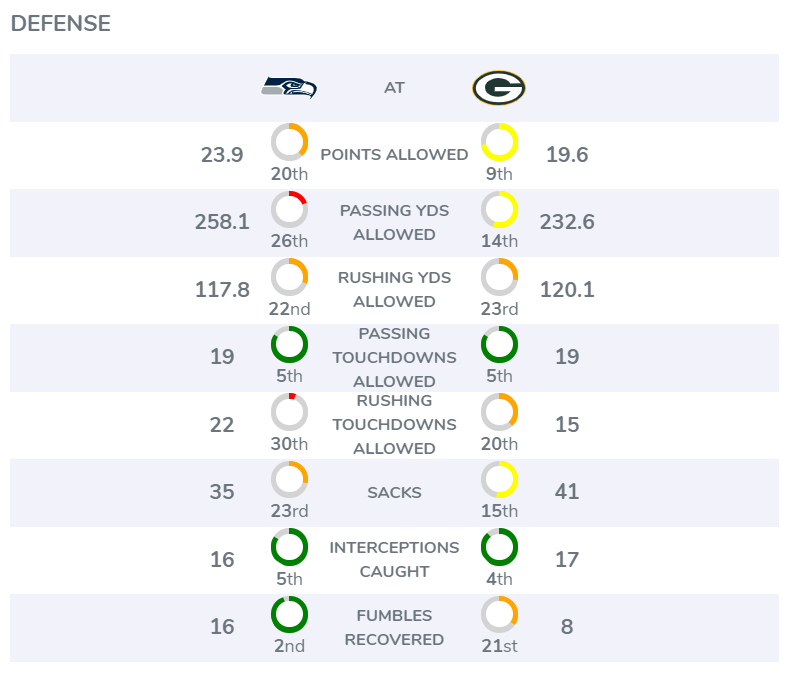 Even their best asset, the running game, has been stripped completely from them. Beating a 78yr old Josh McCown who is trying to scramble in the red zone is one thing, beating Aaron Rodgers in Green Bay in the cold is another. These receivers and running backs know how to put defenders into horrible positions with misdirection plays and slight nuances that they just don’t face every week.

Green Bay deal with the cold year in, year out. Their players know exactly what catches defenders out, and the reality is that even if you took the weather out of the equation, it’d be a tough sell that the Seahawks will win. They may keep it close, but I doubt it. I think a Packers blowout is on the cards.

And that’s from a Bears fan.