We’re down to the final four, but can either of this week’s underdogs pull off an upset, or cover the spread? Upset Watch is here to predict the picks in the NFC and AFC title games. We went 3-1 in our ATS picks last week and this week, we have a good feeling here. The two games have big spreads and a lot of inbformation to work through, so let's skip the preamble, and on with the show! 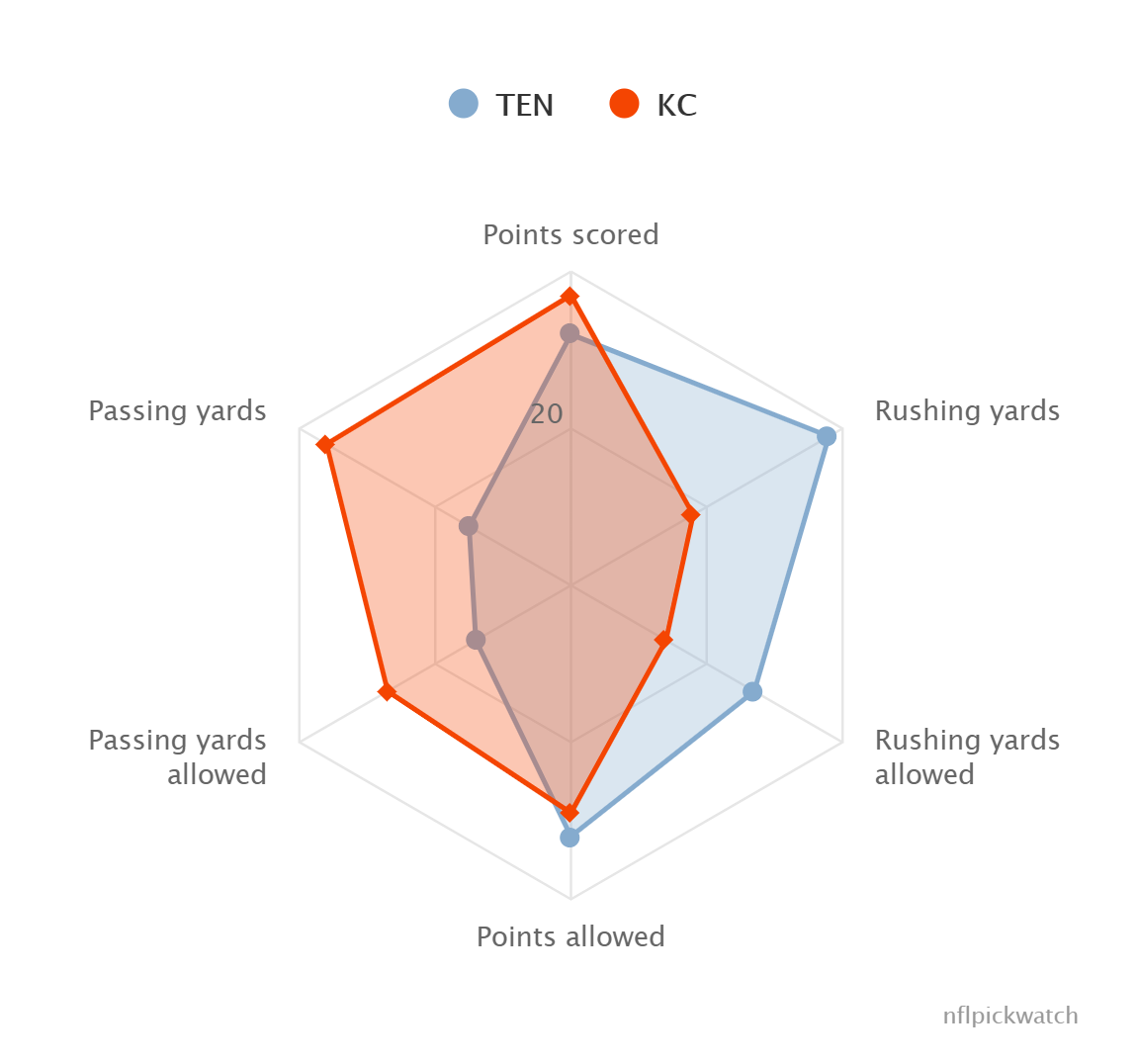 The weather in KC is set to be a brisk 24F, which is basically akin to playing football in your freezer. Would you like to be hit by a 250lb man wearing plastic padding in your freezer? Me neither.

Anyway. This is, weirdly, the lower of the two spreads on offer this week, and rightly so. There are a number of factors in this one that indicate the Titans are capable of hanging with Kansas City, not least that they beat them in the game after Patrick Mahomes returned from a knee injury. 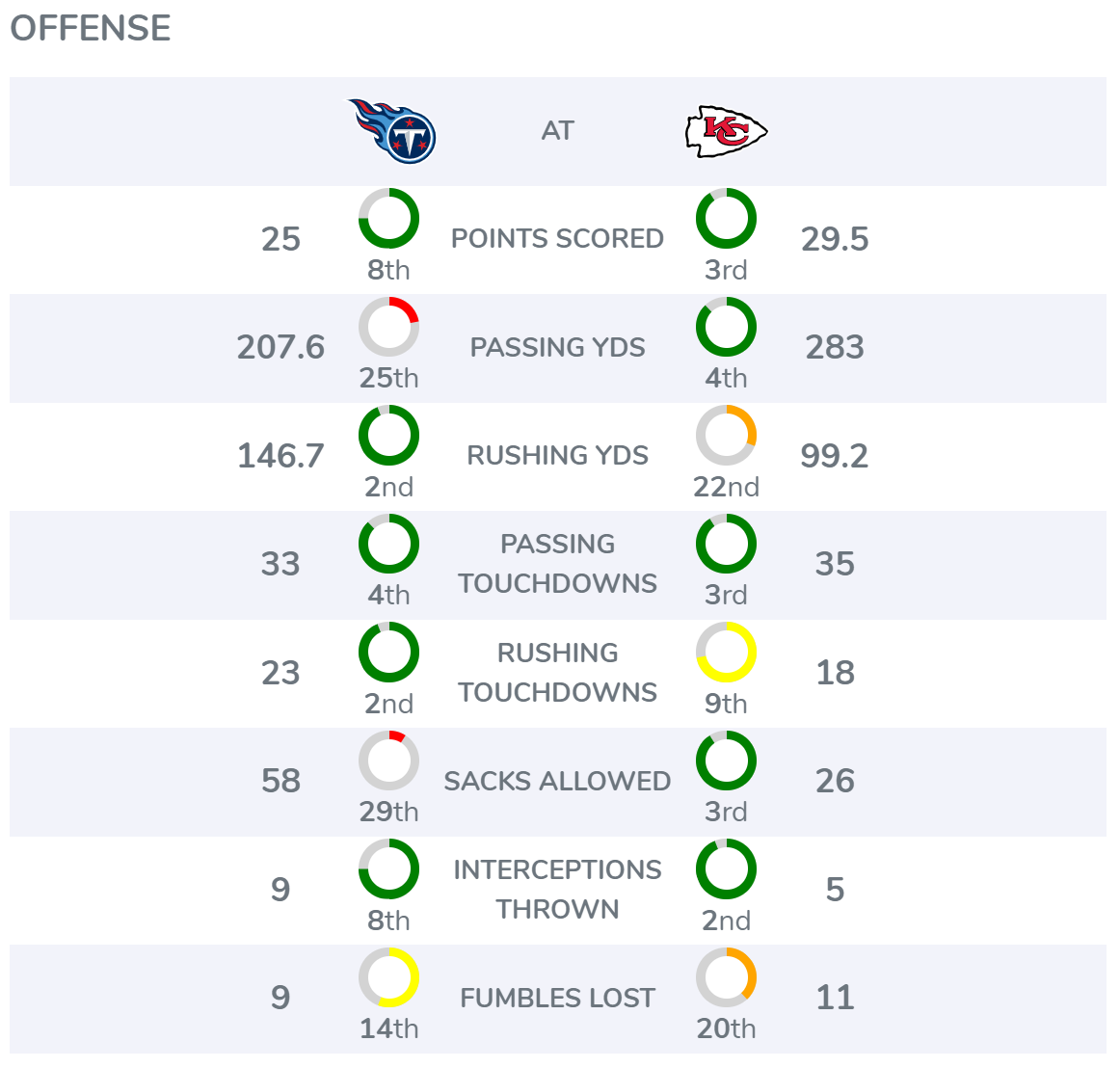 The other very good reason the Titans should feel confident about this game is that they’re in many ways just as good as Mahomes and the Chiefs on offense, and arguably a more effective defense than Kansas City to this point. 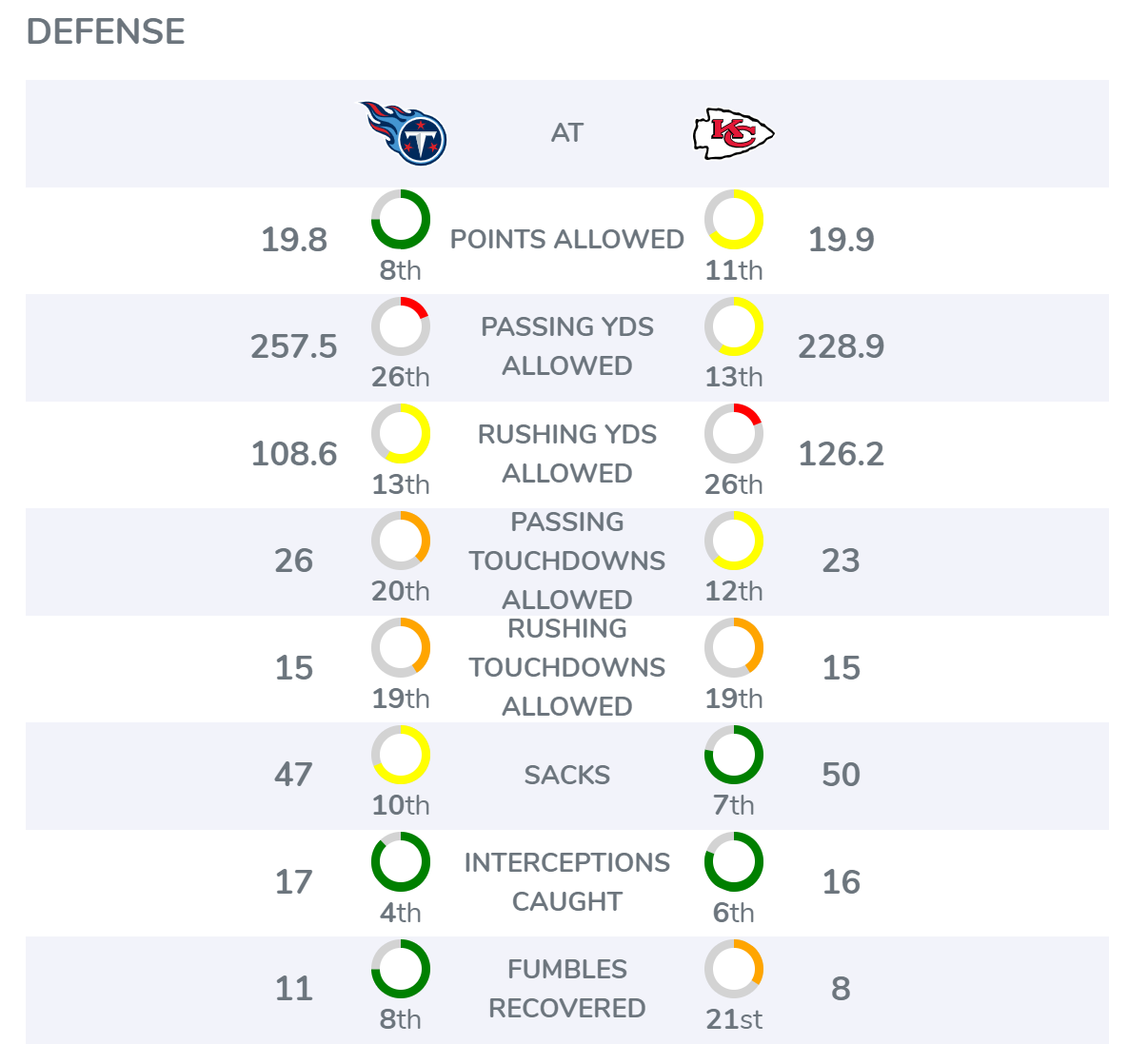 So where do we see this matchup being decided? Looking at the spiderweb for this game, the two teams are mirror images. The Titans are strong when rushing the ball and defending the run, while the Chiefs are string passing the ball and defending the pass. In fact, such mirror images are they, that they both rank 13th for their strength and 26th for their weakness on defense.

The weather will play a part. Houston weren’t good at running the football last week, and their 24-0 lead was as much because of ridiculous Chiefs mistakes as it was any particular effectiveness on offense. This week will be markedly different. And the cold very much plays into Derrick Henry’s hands. That Chiefs defense allowing over 125 yards rushing every game will be hard pushed to stop Henry if he’s in the mood he’s been in for the last few games.

Of course, it’s entirely possible to make the exact opposite case. Tennessee’s passing defense isn’t great and the Chiefs are all-world on that front. They’ve put up insane numbers through the air in the cold, and eschewed a run game in favor of all-out air attack. Will it work? I think it will have some success, but a bigger question is about last week. Will the Chiefs see their ability to overcome any deficit as a good thing, or will they realize they are fallible and could screw the pooch yet again?

My money is on Tennessee, and I think they will win this game. They are a better team than their stats suggest, and they’re extremely talented on both sides of the ball, too much to bet against them. I like them to cause the second major shock of these playoffs and I particularly like A.J. Brown to have a sneakily big game, alongside Jonnu Smith. The Chiefs will have spent so long preparing for Henry that I think Brown and Smith will capitalize on the opportunities it offers.

Titans to cover and win. 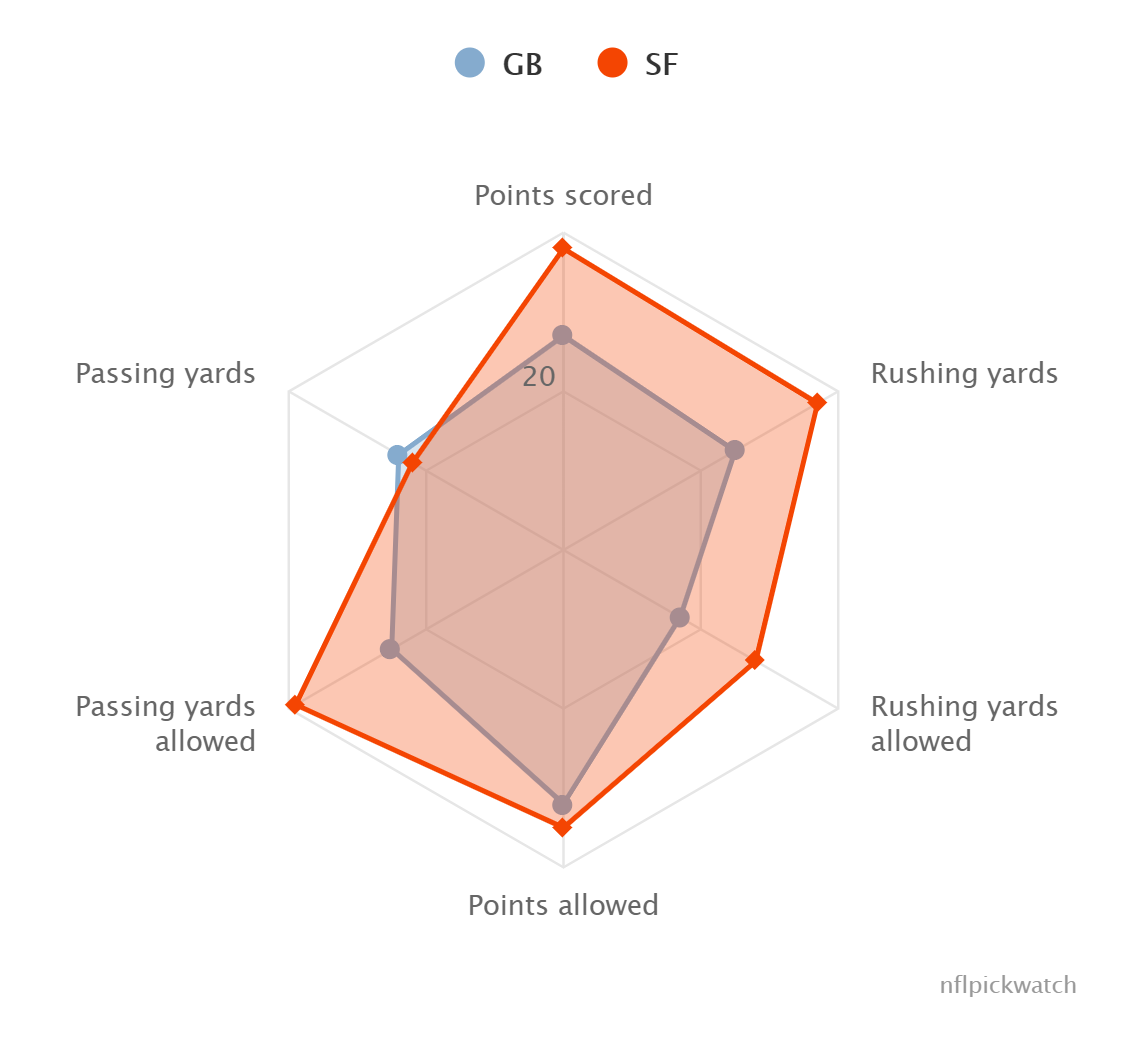 Would you have thought the Packers would be +7.5 and the Titans +7? That’s how much the Packers’ 8-37 capitulation at the hands of San Francisco back in week 12 is factoring into the spread and the public money here.

And the 49ers were impressive last week too. In fact the thing that impresses me most is that they’re pretty much as dedicated to the running game as Tennessee, yet nobody is talking about it. The 49ers rank no.1 in the league for run play percentage at 50.5%, a pretty staggering number in today’s NFL where the pass rules. 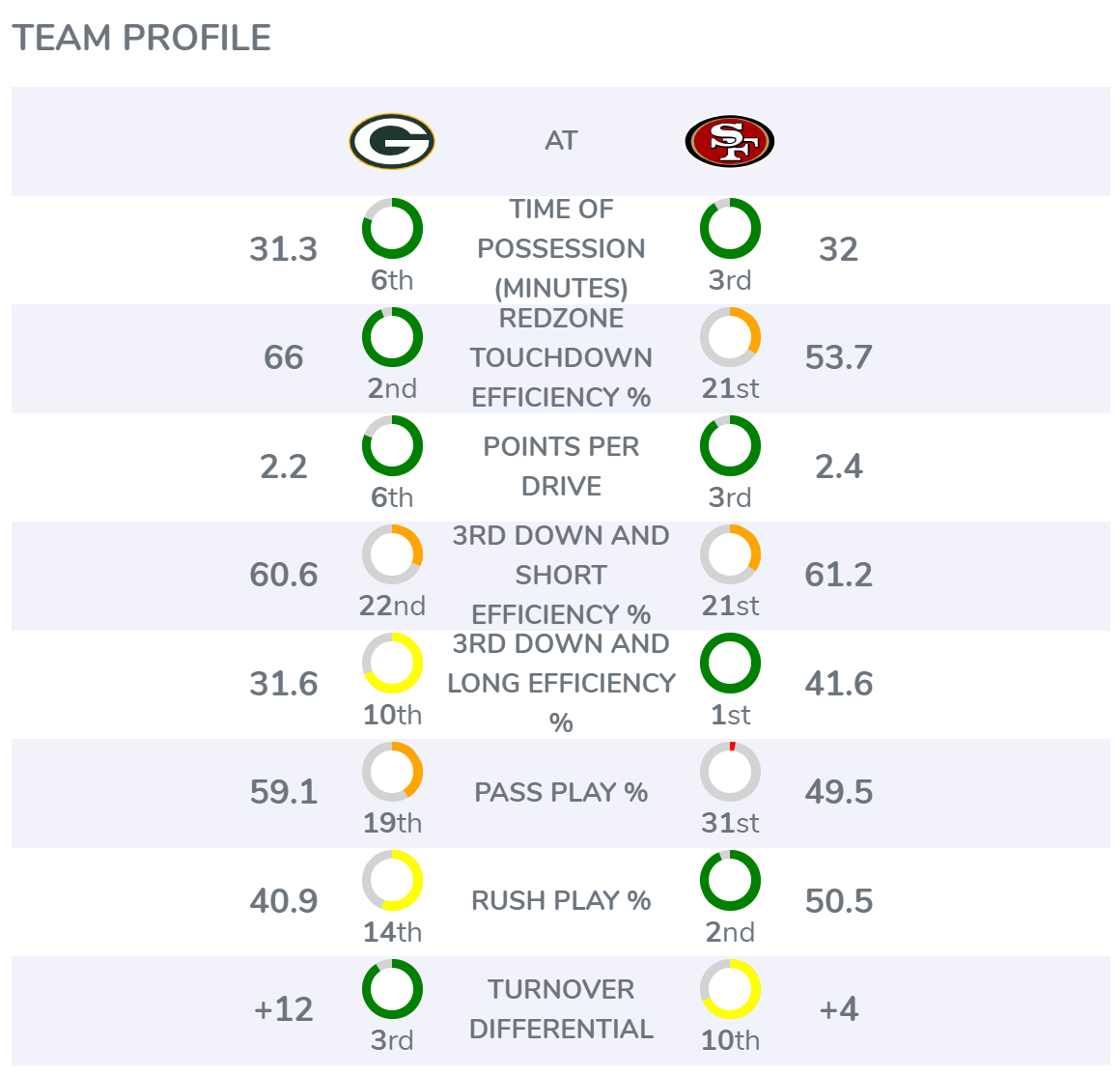 And passing? That’s what the Packers have going for them against the Niners. The problem is that - and this isn’t a typo - the Niners allow a league lowest 166 yards per game through the air. 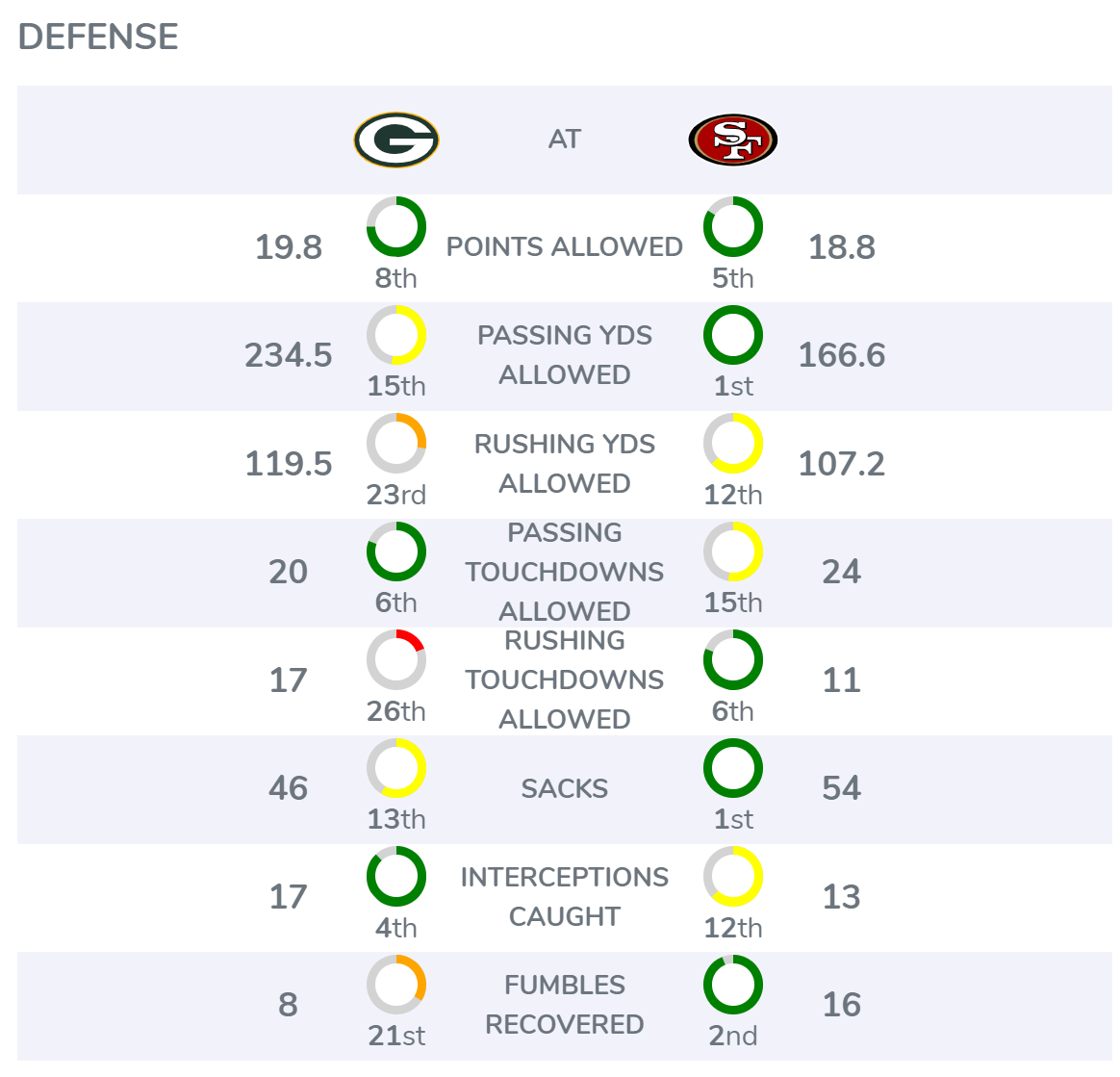 The Niners also shut down Green Bay’s leading rusher, Aaron Jones that day, but it was a complete implosion by Green Bay and in the context of their season, stands out as a big red flag. The question, of course, is simple. Will the same happen again on Sunday?

Well the stats say… it’s possible. I doubt that the Packers will be quite as bad as they were first time out, but the Niners are still just as strong in every area as they were back then. They’ve even managed to work through two more running backs, with Tevin Coleman and lately Raheem Mostert taking over from Matt Breida on the ground. Make no mistake, that is where the Niners will attack a Packers D that is 23rd ranked vs the run.

But there is hope, I believe, for Green Bay. They appear to have garnered something from that game. They beat the Vikings, another run-heavy team, in a crucial game in week 16, and despite that defense, they have a similar average points scored against them to the Niners, just 19.8.

The thing with these games is that we can learn a lot from the previous matchups, but the Packers haven’t generally done so. They’ve played 9 playoff games since 2012 where there was a regular season matchup to learn from, and the result has changed just twice in that time.

As much as I believe this team is different under Matt LaFleur, the Packers haven’t been strong enough on the offensive line to overcome the monster of a defense they’re going up against on Sunday.