KC Joyner's Week 2 pick'em selections
KC Joyner, one of the most accurate pick'em experts in the business over the past six years, details his winners for all of the Week 2 matchups.

My Week 1 results went 10-6, a 62.5 percent win rate that is slightly lower than desired, but is a good mark given the volatility inherent in Week 1 selections.

Here are my Week 2 picks. Each section details which team is predicted to win and provides a quick summary of why that selection was made. The picks also contain a confidence value for each selection, based on a 1-10 scale with “10” being the most confident and “1” being the least confident.

Now on to the picks!

This game is even in many ways. The Browns and Bengals have very similar matchup points totals in nearly every area and have much more talent than is shown in their winless records. There are two tiebreakers pointing in Cleveland’s direction, however, as the Browns have a decided edge in rush defense and pass rush, as Cleveland had the fourth highest pass pressure rate in Week 1 (per pro-football-reference.com). Add that to the Browns having won two straight home games against Cincinnati and it leads to Cleveland being the pick, but with only a “3” confidence level.

Don’t let the Giants loss on Monday night fool you as to how well this team played in that contest, as Daniel Jones threw for 279 yards and two TDs versus the most talented defense in the league. New York’s rushing game should take a huge step forward against a Bears defense that allowed 4.8 yards per rush versus Detroit. Combine these elements with Mitch Trubisky’s passing inaccuracy and it equals a close road win for New York.

I had Atlanta rated as having the worst secondary in the league coming into Week 1 and they pretty much lived up to that expectation by allowing 7.9 yards per attempt and four TD passes to Seattle. Dallas may have the best wide receiver trio in the league and the Cowboys will be fired up to show that the debacle against the Rams was a one-week deal. Combine that with this being a road game for the Falcons and it adds up to a very confident pick for the Cowboys.

Prior to last season, Detroit had actually won four straight matchups against Green Bay. That trend ended in 2019, as the new look Packers took two close games against the Lions by a combined margin of four points. The Lions had last week’s game against Chicago fairly well cinched and would have notched a win had it not been for D’Andre Swift’s dropped game winning pass. They could do even better this week against a Packers defense that gave up a ridiculous 9.6 yards per attempt against Minnesota, but the Lions awful rush defense (5.3 yards per carry allowed versus Chicago) and it being a home contest for the Packers pushes this selection into the Green Bay column.

What in the world happened to the Vikings defense? This isn’t the most talented defense Mike Zimmer has had in his Minnesota tenure, but allowing 522 yards and 43 points to Green Bay in Week 1 shows that this platoon needs to make some big-time adjustments. Philip Rivers made some errors last week against Jacksonville, but he also completed 78 percent of his throws and had the sixth highest net yards per attempt in Week 1. Those factors are enough to give the Colts the edge at home.

The Dolphins offense was awful last week, as Miami averaged only 4.8 yards per play and just 3.2 yards per rushing play. Ryan Fitzpatrick was equally bad, as his three interceptions brought up questions about whether Miami should go the rookie route at quarterback as early as Week 2. Josh Allen had his first career 300-yard passing game last week and added 57 yards on the ground, so Buffalo has a strong offense to go along with their powerhouse defense. This would be a “10” confidence level if the game was in Buffalo but traveling to Miami drops it to an “8” confidence level for the Bills.

The Bills over the Dolphins is one of three “8” confidence level picks in Week 2. Imagine if you could get 100-1 odds on this matchup? You would have to be crazy not to take those odds, right?

Well, that’s exactly what you can get in the DraftKings Sportsbook’s introductory 100/1 odds promotion. Just click here to sign up, make a minimum $5 deposit, pick which Week 2 game you want to apply the 100-1 odds to, and if you pick the winning team, you can turn a $1 wager into $100. It’s a no-brainer deal that would be foolish to pass up. 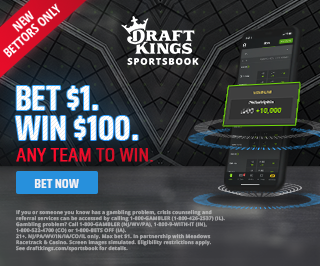 The Jets will contend for last in many power rankings charts this week, as New York allowed Josh Allen to post his first career 300-yard passing game while ranking next to last in offensive yards in Week 1. The loss to Arizona doesn’t speak poorly for the 49ers, as the Cardinals are definitely a team on the rise, so don’t read much into that contest. The 49ers do have the longest road trip in the league in Week 2, a factor that moves the confidence level down to a “7” mark for San Francisco.

Philadelphia’s atrocious offensive line play led to eight sacks against Washington, but that wasn’t the only part of the team to play badly, as Zach Ertz posted only 18 receiving yards, the two top rookie wide receivers both made mistakes that led to interceptions, and the secondary had a couple of errors as well. Los Angeles may have trouble getting a rush attack going against Philadelphia’s one-gap pressure defense that allowed the fifth fewest rush yards in Week 1, but so many other factors point in the Rams direction that they rate a “7” confidence level despite traveling 2,400 air miles for this matchup.

It took a quarter and change for Ben Roethlisberger to shake off the rust, but once he did so the Steelers passing game looked nearly as dangerous as it was in his record setting 2018 campaign. Benny Snell did a fantastic job of reading blocks and defensive gaps, so Pittsburgh’s ground game will be in good shape regardless of if James Conner can play through his ankle injury. The Broncos are battling injuries to Phillip Lindsay, A.J. Bouye, and Courtland Sutton and have a long road trip to boot, so Pittsburgh rates as one of the most confident picks of Week 2 with an “8” confidence level.

So, the Steelers are a huge favorite against a banged up and struggling Denver team. What would you give to get 100/1 odds in that type of matchup? Well, this week you won’t have to do anything more than take advantage of the incredible DraftKings Sportsbook’s introductory promotion that allows you to get 100/1 odds on any team in Week 2. Just click here to sign up, make a minimum $5 deposit, pick which Week 2 game you want to apply the 100-1 odds to, and if you pick the winning team, you can turn a $1 wager into $100.

There is so much talk about Tom Brady and Mike Evans and Rob Gronkowski’s woes that it is going unnoticed that Tampa Bay’s defense allowed the second lowest yards per play total in Week 1 (4.1). Carolina’s offense looked every bit as good as expected, but the Panthers defense allowed 372 yards and 6.1 yards per play to a Raiders offense stocked with rookies. Facing Carolina in a home matchup is a huge upgrade versus facing a tough New Orleans defense on the road, so Brady and company will very likely get back on track this week and get Tampa Bay a win.

Minshew Mania picked up right where it left off last year, as Gardner Minshew completed 95 percent of his passes and threw three touchdowns in leading the Jaguars to the upset win over the Colts. That might lead to another upset pick this week were it not for Jacksonville’s defense allowing 445 yards against the Colts and Jacksonville posting the lowest offensive yardage total in Week 1. If those trends continue in a road game against a powerhouse Titans team, Tennessee should win this game handily, but with the Titans kicking questions the confidence level is only “5” in this one.

Don’t let the 27-17 final score against Philadelphia fool you regarding Washington’s performance. Washington had the fifth fewest rush yards in Week 1 and dominated an injury-riddled Eagles offensive line. The Cardinals offense showed they can deal with a power-centric defensive front last week against San Francisco and Washington won’t be able to rely on a bunch of rookie wide receiver mistakes to lead them to another high turnover total like it did against the Eagles. Add those to the Football Team traveling nearly 2,000 air miles for this matchup and it equals a fairly confident Arizona victory.

It’s tough to hold last week against the Texans, as they lost an opening season road game to the best team in the league. Having said this, they now host a Baltimore squad that, based on Week 1 performance, is the top team in many power rankings headed into Week 2. The Ravens are known for their superb run blocking, yet Baltimore had 270 passing yards and three passing TDs in Week 1. This is simply the case of the Ravens having more paths to victory than Houston, so Baltimore gets the nod here, but only with a confidence level of “4”.

The Chargers had to work around a lot of offensive line injuries last week and their solution to this problem was to run the ball 39 times. That game plan worked against Cincinnati but trying to win with a shorten the game approach against a Kansas City offense that has now shown it is equally dominant on the ground or in the air is not a recipe for pick’em success. The Chiefs have won 11 of the last 12 against the Chargers and haven’t lost a road game to the Bolts since 2013. That trend is not likely to change this week, so rate Kansas City as one of the most confident picks in Week 2 with an “8” confidence level.

How great would it be if you could get 100/1 odds on the best team in the league taking on an opponent that it has won 11 of the last 12 against? It might sound too good to be true, but it actually isn’t for those who take part in the DraftKings Sportsbook’s amazing introductory 100/1 odds promotion. Just click here to sign up, make a minimum $5 deposit, pick which Week 2 game you want to apply the 100-1 odds to, and if you pick the winning team, you can turn a $1 wager into $100.

If there was any question what type of offense the Patriots would run with Cam Newton under center, it seemed to be answered against Miami when New England had only 19 pass attempts versus 42 rush attempts. That grind it out approach will be difficult to use against a Seattle defense that allowed only 72 rushing yards and 3.4 yards per carry in Week 1. The Patriots could go pass happy to challenge a Seahawks secondary that allowed 434 passing yards against Atlanta but getting into a shootout contest doesn’t fit New England’s personnel in any way. Combine all of this with the Patriots having the second longest road trip in Week 2 and it leads to Seattle getting the selection here.

At first glance this matchup would seem to favor the Saints, but the Raiders have their share of favorable elements in this contest. Derek Carr completed 73 percent of his passes last week while posting the eighth highest air yards per attempt in Week 1 (per pro-football-reference), numbers that show the impact that Henry Ruggs and Bryan Edwards are having on this offense. The Saints will almost certainly be without Michael Thomas, who suffered an ankle injury against Tampa Bay. Add that to Drew Brees throwing for only 189 yards last week and this being a 1,500-mile road trip for the Saints, and it equals the Raiders in a slight upset pick with a “3” confidence level.