Corrigan's Gambling Corner: College Football Week 4 Best Bets
Check out how we are betting Week 4 of the college football season. 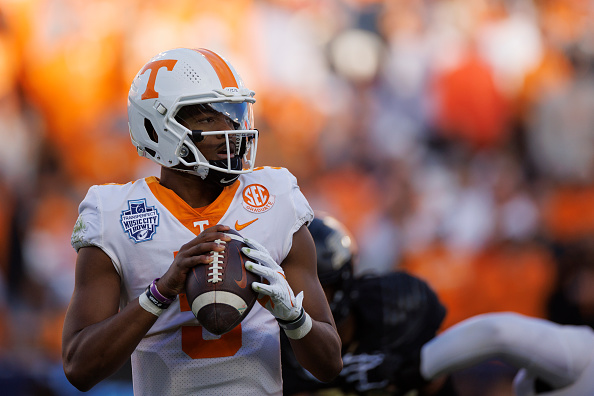 The work week is past us once again, and that means it is time to give out our best bets for Week 4 of the college football season.

I hate to brag, but I am on a 14-8-1 run in college ball, and I dominated the board last week, which is huge considering I could smell multiple rats. This week will not be any easier, however, as conference play is starting up, and we are still trying to figure out what teams actually are.

We are now onto day two of five straight days of football, and we are here to give you the best bets for every slate. Anyway, let's get straight into the picks. If you decide to follow our best bets, we ask that you do so responsibly.

Remember the Michigan team from last season that ran the ball down teams' throats and had an awesome defense? Well, they are nothing like that this season, and that might be a scary thing for the rest of the Big Ten.

I have always said that beating teams you are supposed to is not that impressive, but throttling those teams is indicative of an elite team. For example, the Georgia team that won the championship last year beat their out-of-conference schedule (not counting Georgia Tech) by an average of 26.4 points, and LSU in 2019 beat up their out-of-conference schedule by an average of 37 points per game.

#Michigan QB JJ McCarthy is looking like a special talent, and potential first round pick.

On the other side, Maryland has been as impressive offensively as anyone in the country, scoring 40.3 points per game and going for 8.1 yards per play. The Terrapins are 3-0 to start the season and they are outscoring teams 121-58.

This is going to be an interesting test for both teams, but if Michigan can thump this explosive Maryland team, it may be time to start talking about them being right behind Georgia as the second-best team in the country.

With all of that being said, I will lay the points with Michigan at home in this spot. The Wolverines are outscoring the Terrapins by 33.7 points per game over their last six meetings, and although Maryland's explosiveness scares me, the best defense this team has faced has been SMU's, who are giving up just shy of 500 yards per game, and has one of the worst front sevens in the FBS.

This game would be so much more exciting if Florida didn't completely fall on their face after their massive opening week victory over Utah.

The offense has been mediocre, Anthony Richardson has more tackles than touchdown passes (he actually has zero passing touchdowns), and this is their first road trip of the season, and it is going to be the most intimidating atmosphere they will see this season.

Tennessee is getting a lot of love after starting the season 3-0, and they absolutely deserve it, but I still have some questions about the defense. They needed overtime against Pitt's backup quarterback to win, and they are ranked 76th in opponents' completion percentage. Luckily, Florida is only throwing the ball 25.7 times per game, and they are outside the top 100 in practically every offensive passing stat.

Still, rivalry games are always tight, and Florida has dominated this series as of late, winning five straight against the Vols, and the Gators have won seven of their last eight in Tennessee. Even though I think Tennesse is comfortably the better team in this matchup, I am not comfortable laying the 10.5 with the Vols.

However, I am staying away from the spread and focusing on the total in this game. The total has gone over in eight of the last nine games for the Vols, and five straight at home. I do really like Tennesse's front seven, which will force the run-heavy Gators to pass the ball, which gives us more opportunities to score.

Arkansas is 17-8-1 ATS under Sam Pittman, and they have won, and/or been competitive in every big game they have been in. The offense is rushing for 262 yards per game, and they are picking up 8.2 yards per pass. Defensively, they could use some work, especially in the secondary, but it is a good thing that Texas A&M's offense is offensively bad.

The Aggies' offense is ranked 112th in scoring (15.5), 125th in yards per game (225.5), and they are outside the top 100 in every passing stat that matters, and what is even more interesting is that they are not even running the ball all that much either, ranking 127th in rushes per game.

A&M has only played bad passing offenses, and while I do not want any confusion on how good Arkansas' passing attack is, this is FAAAAAAAAAR and away the best passing attack they have seen this year. The quarterback change to Max Johnson made them look slightly decent against Miami last week, but there still is no juice, and I truly do not know how they expect to keep up with the upper-tier teams in the SEC.

KJ Jefferson gets a lot of attention for Arkansas, and rightly so, but don’t sleep on Rocket Sanders this season 🤫

The biggest question in this game is if Arkansas can generate a pass rush. They have been very "meh" all season, but Drew Sanders has been a big impact transfer from LSU, and they are hoping to get Myles Slusher back this week, which will help clean up the secondary.

Nonetheless, I love the Hogs as the road dog in this spot. They are 4-1 ATS over their last five against Texas A&M, and unless Jesus Christ himself graces us with his presence in a Texas A&M uniform this week, they have no chance of outscoring the Hogs.

Best Of The Rest:

Kansas State lost a game they had no business losing against Tulane last week and the Sooners went into Nebraska and effectively wiped the Cornhuskers off the map, so naturally, Oklahoma seems like the right side in this game.

However, the Wildcats have been a pain in the ass for the Sooners for a while now, as they have won two of the last three matchups against Oklahoma, and they are 4-1 ATS in their last five matchups with their Big 12 rival.

Despite the loss, I really like this Kansas State team, I think they will run the hell out of the ball, and keep this game close. This is the perfect letdown spot for Oklahoma coming off a massive road win, and with expectations continuing to build.

I hope you paid attention during the offseason, and especially last week when I told yall that Kansas is for real.

While Duke has also been a surprise 3-0 team to start the season, the Blue Devils have played Temple and Northwestern, two of the worst FBS teams in the country, and they also took down FCS North Carolina A&T. The offense looks great, scoring 30 points per game, and they are only allowing 11.5 points per game.

The problem is, Kansas not only has one of the best offenses in the country (and I am being 100% serious), but they have had to beat Houston and West Virginia on the road to start their season. I am going to ride with the Jayhawks until the wheels fall off.

I have ridden with both the Beavers and Trojans every game so far this season, and it has been a very profitable decision for me. However, I have to pick a side in this game, and it pains me.

Chance Nolan and that @BeaverFootball offense is on FIRE 🔥

Oregon State has been so much fun to watch because of how explosive they have become with Chance Nolan at quarterback, and although their defense is giving up 6.7 yards per pass, and they are allowing teams to complete passes at a 64% clip, they are content with dropping as many players as they can back, which should help against Caleb Williams and this explosive passing attack.

USC is the better team, but the Beavers are 7-0 ATS over their last seven home games, and they are 6-4 ATS over their last 10 matchups with USC. I would stay away if the number was any lower, but at 6.5 points, I will ride with Oregon State at home.