Buffalo Bills vs. Los Angeles Rams: 4 Best "Thursday Night Football" Prop, Team Bets
The NFL is back, and we are here with the best prop, team bets of the night 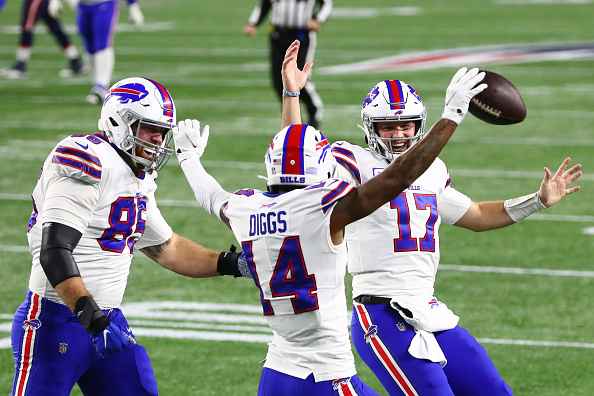 Well, well, well, is that the NFL kicking off tonight?

Happy opening night to all of those who celebrate. We already got our first taste of meaningful football with the college football season kicking off two weeks ago, but the NFL hits so much differently. It is almost shocking to remember the amount of talent in the league, and it seems to me that the young players are becoming stars earlier than when I was growing up.

Let's not be confused here; I am a college football guy, but I am so excited for the NFL season, and I am eager to place some action on every game once again. With only one game, I have decided to give you the best prop from three of the top sportsbooks in the country, as well as the best overall bet of the night through the book I use, BOVADA. If you decide to tail our picks, we ask that you do so responsibly.

Let's pick out some winners.

For the first time in his career, Allen Robinson will get to play with an actually good quarterback. Last season, in an awful Bears offense, Robinson only went over this number twice in his 12 games and averaged only 6.21 yards per target.

It is almost impossible to succeed in that offense, so entering a pass-heavy scheme will certainly boost Robinson's stock on the prop markets.

The Bills' defense was ranked No. 1 in defensive DVOA last season. After signing Von Miller in the offseason, there are a lot of expectations around this unit, especially with, objectively, the best secondary in the NFL.

However, Buffalo will be without Tre'Davious White, meaning they will start rookie Kaiir Elam and third-year corner Dane Jackson, who only has eight career starts. That is not a lot of experience against one of the most talented receiver rooms in the NFL.

Obviously, Cooper Kupp will be the most dangerous weapon on the field for the Rams, but with a banged-up secondary, the Bills will have their hands full with Robinson, Kupp, Van Jefferson, and Tyler Higbee. Robinson will be taking over Robert Woods' role with the team, which makes me feel comfortable about taking Robinson at this number.

In his nine games with Los Angeles last season, Woods averaged 7.7 targets per game, and now Robinson, who only averaged 5.5 targets in 12 games last season, should start seeing more balls thrown his way, which is always a good thing when taking the over on a receiving prop.

Los Angeles allowed the 11th-most receptions to TEs last season and gave up 9.7 yards per pass. The free agent signing of Bobby Wagner should help clean up the defense at the second level, but Knox is coming off a career year in 2021. With the amount of talent in Buffalo on offense, I can see the field opening up for him, letting him take even another step.

Knox's yards per reception have gone down each season, but his receptions per game are up to 3.3, and his yards per game exploded up to 39.1, which is 14 yards more than his previous career-high. The Rams like to play their safeties deep to limit the explosive play, which is definitely something to be concerned about with this Buffalo offense. This will allow Knox to play his game and eat up the middle of the field.

This number feels a little too low for me, and although I am a big fan of this Rams' defense, Knox keeps getting better every season, and the team agrees by giving him a four-year extension.

Stefon Diggs' has arguably been one of, if not the best wide receiver in the NFL since he was traded to Buffalo two seasons ago. In his time with the Bills, he is averaging 115 receptions, 1380 yards, and nine touchdowns per season on 165 targets. In his last two seasons with Minnesota, where he really broke out, he averaged 82.5 receptions, 1075.5 yards, and 7.5 touchdowns per season.

I do not think I need to explain just how dominant he has been with Josh Allen and the Bills; the numbers speak for themselves.

However, Buffalo's offense keeps improving, so the reliance on Diggs to make every big play is not as urgent, but let's not be mistaken here, Diggs is still THAT dude on this team. Diggs is coming off a 10-touchdown season, which is a career-high, and he had more games with a touchdown than without a touchdown.

There will be a lot of passing because of how scary the Rams' front seven is. More passes mean more opportunities, which is the name of the game when looking at the prop market.

I have been staring at this game on Bovada for the last four months, and I have to tell you, I still have no idea which team will cover.

I have a Bills Super Bowl future, and I think they are the best team in football, but this is Banner-Rasing night for the Rams at the same place they won the whole thing. They will be fired up, returning a ton of their production, and the lost production will be replaced with arguably equally talented players.

Both teams have solid rushing attacks, but the Bills threw the ball the seventh-most times per game last season (37.7), while the Rams were 10th in the same category (35.7). Another thing both of these teams have in common is that they lost their offensive coordinators during the offseason, which may change things up on offense for both sides, but these are two pass-first teams, so expect a lot of offense in this game. I said it earlier, but more passes mean more opportunity, which is all we need.

The total has gone over in eight of the last nine matchups between these two teams, and the Bills have cashed the over in four of their last five road games. If you are looking for a pick ATS, I am leaning Buffalo just because I believe in them so much this season, but the best play for this game is the over.

This is a great matchup, and I would rather root for points than a specific team.