Week 6 is surprisingly, the second biggest of the season for upsets, historically. Why is that? Nobody knows except... maybe Upset Watch! Let's do another dive into the murky world of underdog covers! 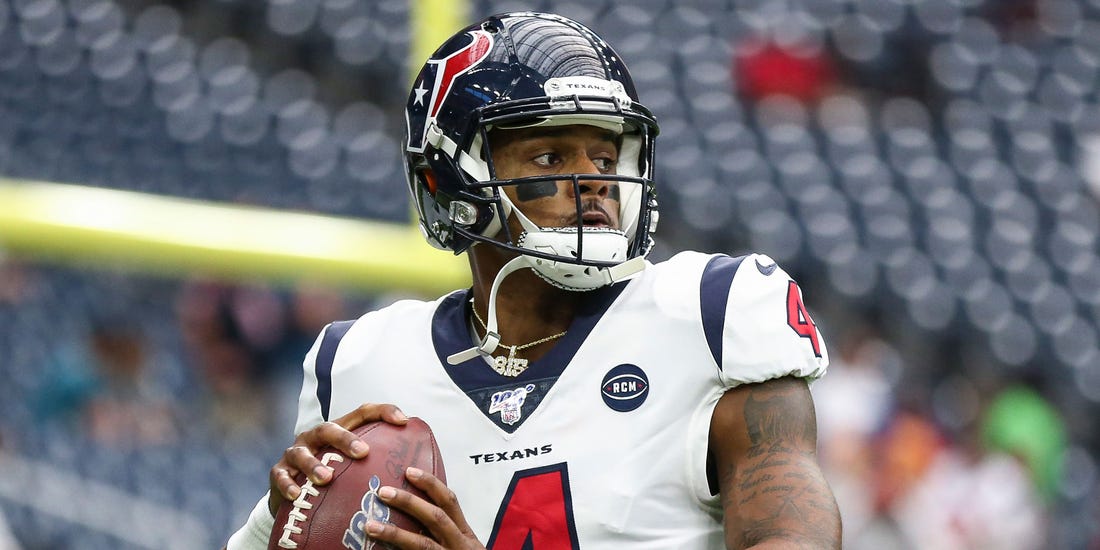 Last week we got another great result with our pick of the week, with the Colts covering and winning, just as we predicted. The methods are looking good, but can we improve again in week 6 as the points spreads become that little closer? Let’s find out…

Let me tell you something odd. Historically, week 6 is actually a time of GREAT UPSET. Underdogs cover that spread really well, in fact, our data shows that there’s a spike in week 6 that is second only to week 2, even more impressive given that 8 wins is always going to be coming in a week with bye weeks. 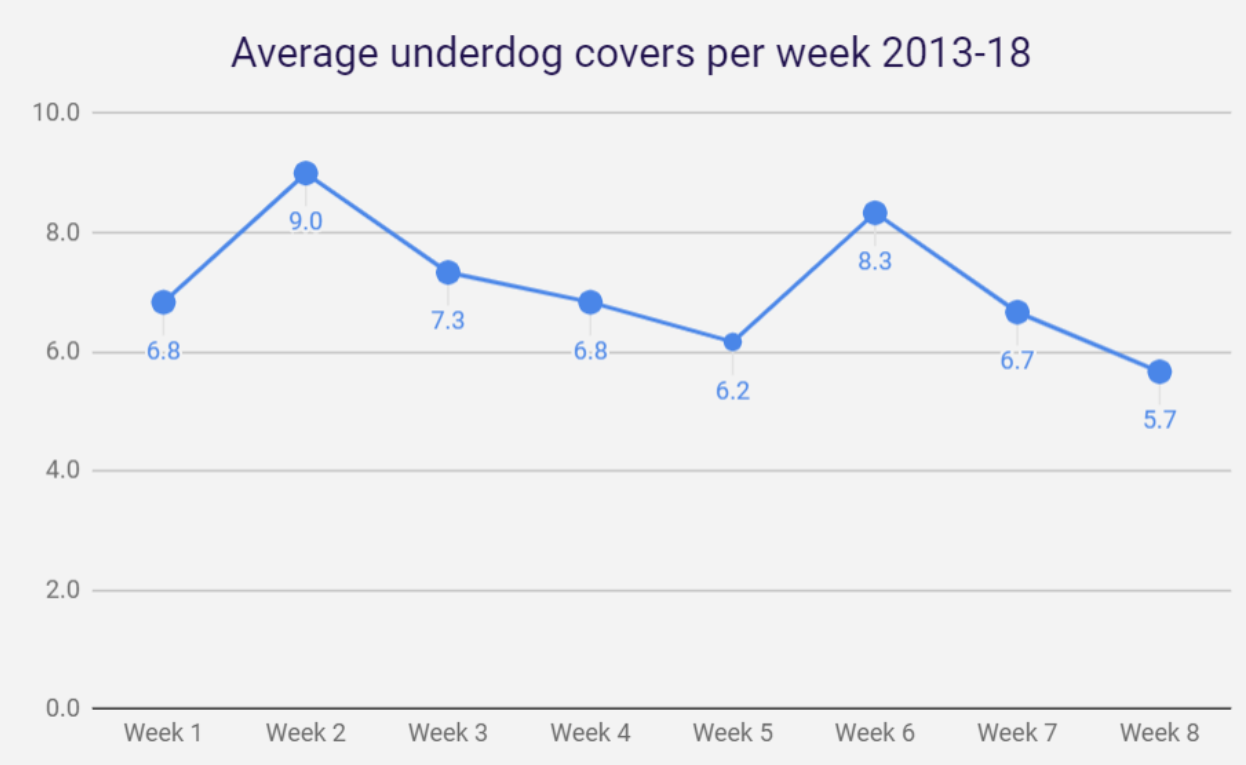 What does that mean for us? It means we need to be bold, pick more underdogs. That’s kind of what we do here, so let’s do it together and find out who is most likely based on the stats this year so far, shall we?

Editor’s note: For the purposes of these trends, London games are discounted from home and road statistics

We are still living the road underdog dream at the moment. Whenever they’re down by a bunch of points, they’re at least covering, even if they don’t win. Conversely, home favorites are a disaster area who have regularly failed to cover or win even when favored.

One explanation for this may simply be how many knee-jerk reactions have occurred this year. As someone who watches every spread each week, I can say with some certainty that Vegas and bettors are flip-flopping at an alarming rate. For example, the hot Seahawks are barely favored against the Browns on the road, the Broncos, who are conversely ice cold and coming off a win against the inconsistent Chargers, are somehow favored against Tennessee because they um… won a game.

We’ll be looking for another big week with this breakdown: First off, let’s again take those road dogs with high spreads. The Giants, Cinci, Houston and Pittsburgh all fall into that category, albeit we’ll need to apply some thought to Pittsburgh. Let’s say that’s three of our projected 7 picks.

Now there are the road dogs with less than that, they’re still tracking at 65%, and with Philly, the 49ers, Saints, Titans and Lions to choose from, we can certainly add another three of our projected 7 picks to take us up to 5/7 in total.

The final two? Well, they’re going to be at home… kind of. The Bucs and Panthers play in London and we’ll need to assess that separately from all of this.

We know we want to avoid the +4.5 or greater home dogs, who don’t cover very often (2-9, zero wins in 2019 so far). That rules out the Jets (aw, and we were so close to going with them…) but leaves two from the Cards, Browns and um… Dolphins… one of those teams to cover gives us a full eight picks, so let’s do this!

I always find our first pick of the week being an underdog cover on Thursday night is a real risk, but 5 of the last 6 Thursday night games have seen underdogs cover. Admittedly, the Giants not having Saquon Barkley, Evan Engram, Wayne Gallman, Sterling Shepard or… well… anyone at all, is a minor problem that we need to work through.

Last week, when I picked the Broncos, I talked about staying true to the methodology, and this rings true again this week. Even if you hate the Giants, do you hate them… plus seventeen points? I don’t. They’re the Giants, they are always expected to lose heavily against the Pats, and sometimes they don’t. I can’t think of any specific examples, can you?

So last week we went to the new Spurs stadium that will also host this game, and I can tell you that it is a great stadium with a far better atmosphere and setup for the NFL than at Wembley. That said, my concern with London is always that when you get two less well-followed teams (ie: neither of these teams have big followings in the UK) it generates a more ‘neutral’ atmosphere.

I am going to leave well alone here as the stats with London call it a 50/50 proposition. My heart says the Panthers if you absolutely must bet this game. Half a unit.

Like the Giants, the Bengals don’t really seem to have a lot going for them right now, so picking them to even stay two scores down on the Ravens seems foolish, but again, this is what ATS is. The myriad ways any NFL team can cover a spread like this should make it obvious that when we have teams that aren’t utterly broken (Miami), we stick with our methods. The Ravens have been flakey with the spread this season, but they should win. I’m still of the belief that the Bengals have a big breakout game in them, they certainly have the offense to do so.

This was a tough one. Something is a bit wrong with the Chiefs, isn’t it? Without Sammy Watkins and potentially Chris Jones at DT, they are a different proposition for a Texans team riding high off the back of some impressive performances. It all seems to be coming together for them at the right time, and… what’s that? A spread over 4.5? Excellent! This is our pick of the week, with a Texans win also possible.

This is one of our low spread/road underdog games, and it’s a little bit of a surprise to see the hot-hand of Teddy Bridgewater and the Saints as underdogs against the Jags. Sure, Jacksonville have performed well so far this season, but the Saints are a much more complete team and now that Bridgewater is playing with confidence, they have every chance of winning heavily. This one feels wrong from the start, I wouldn’t be at all surprised to see it flip by kickoff, but get on the Saints while they’re underdogs...

Nope, don’t like this. Don’t like either team right now because of their inconsistency and ability to completely clow up one way or another. While it may end up being a good game, my money this week is on Dalvin Cook and the Vikings D, with a cameo by Cousins, Thielen and Diggs. The Eagles seem like a whacky underdog at times, they come up with some wins they shouldn’t, but I think this one might be a case of bad timing.

Ah now this, like the Saints is one for us to look at, because again, we have a hot team (Seattle) playing an average team on a cold streak. Maybe this is where the Browns arrest their fall? This one feels like bias against west coast teams, combined with Seattle’s ‘beat ‘em by 1’ record this season. This week, I’m going with them to win by more than that, possibly a lot more.

I hate this pick, I really do. The Dolphins don’t deserve our love (the team, not the animal, at least) and were it not for the fact that both these teams are almost equally inept, I wouldn’t pick them. As it is, I think the Dolphins may identify this as their only chance of a win. It’s a psychological factor that goes head to head with the Redskins and their desire to impress interim coach Bill Callahan. We know which one we fancy to be more likely...

On paper, this has upset written all over it, but the Cardinals are a bit difficult with these games, they haven’t really got going properly and the fact that David Johnson is a game time decision worries me a lot. Enough to take a risk on the slow starting Falcons, in what could be a terrible version of the bird bowl.

Game of the week? It’s right here, thanks. That doesn’t necessarily mean it’ll be upset of the week, but I think it will be a 49ers cover and win. This team is good enough to win, and despite losing both games against the Rams and Sean McVay/Jared Goff last year, they are different with Jimmy Garoppolo under Center. They can run, pass and defend better than the Rams right now, which means that with the Rams also on a two game losing streak after scoring a bunch of points, they may not get a better opportunity to prove all three.

We say it each week, but home dogs are 0%, nada, zero when facing spreads of 4.5 or more. They have only covered twice all year, and the Jets? They’re not really the team you want to break that trend. Sam Darnold being back could help (sorry Sam, I apologize for suggesting Luke Falk wasn’t much of a downgrade, he is), and the Cowboys have hardly set the world alight recently, but this is a good opportunity to get back on track.

What to make of either of these two teams is a complete mystery. All I know is that the Titans turn it on miraculously as soon as people write them off, and the Broncos have been poor all season long. That vaunted Joe Flacco air-assault (we jest) of 180 yards was probably not the reason they won against the Chargers, and it’s pretty simple, the Titans have just been poor as favorites. They’ve lost all 3 as favorites, and won both as underdogs. Some teams are just wired to do it this way, so get on board against a low scoring Broncos team...

I hate this pick. The Chargers are horrible and arguably at the nadir of their season having lost to the aformentioned Broncos. The only way it could get worse, would be to lose to a team that has no QB in the Steelers, at home. The Steelers will likely start Devlin Hodges, undrafted out of Samford and (I kid you not) a world champion duck caller. I want him to win so badly, but the Chargers have good performances in them, despite injuries of their own.

Hardest game of the week to pick is in Green Bay (isn’t it always, these days?). The Packers have been grinding away all season and now find themselves out front alone. They’ve beaten good teams, they’ve beaten some bad teams, but can they beat.,.. The AVERAGE TEAM? I think yes, but the call was close, and because of where we are, and the fact that we have never had less than 8 underdog covers in week 6, it’s time to go with the Lions. God speed, little doodle.