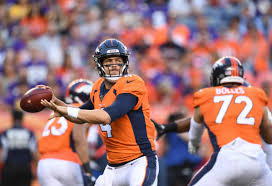 That's a good start. Let's expand on last week's methodology and look at how many upsets we can expect in week 3 on average:

That means that week 3 is even more muddled than week 2, which gives an average of 8.5 underdog picks. A caveat is that in 3 of those years, the favorites at least managed to cover 50% of the games, but the unnervingly consistent years preceding and after that spell indicate that average would be far more accurate than assuming just 5 underdogs will win this week.

This week, we're going with 9 underdogs. Here's who we've got:

WHAT IS THIS SPREAD DOING? The Broncos have faced two tough-ish opponents in Seattle and Oakland, with Case Keenum coming up with big plays when needed to win games, much as he did last season in Minnesota. The team is not some overwhelming behemoth that will crush all underfoot, but I really don't think the Ravens have a good team this season and at this early stage, their statistics are heavily skewed by that first week win against a non-existent Buffalo defense.

The Broncos will upset a few more teams this year, but that spread at +5 is pretty crazy for two teams with very different trajectories. The Ravens may scrape a win if the Broncos can't score points more consistently, but I see this being at best a tight Ravens win - it could be much more messy for them if the Broncos find their groove.

You want a joint upset of the week? Take the Colts, who have been reliably unreliable already this season. We're on the right side of the schnide, and it seems somewhat bizarre that the spread is 6.5 after their performance in Washington last week (vs the same odds, for what it's worth...) where they manhandled the Redskins.

The Eagles have Carson Wentz back, but if we're being brutally honest, that may be as much to do with their struggles getting Nick Foles going, as an indication that Wentz is healthy. I think for all of us, seeing Wentz play at the level he managed in his first and second years would be a good sign that the Eagles can be trusted, but until that point, giving up almost a touchdown is a massive red flag to pickers. Take the Colts.

Let's flip that logic about the Colts around. The Redskins are what I would politely describe as a real bunch of assholes. They're a team that will beat you vs the spread by virtue of their inability to win against teams they should beat (Indy in week 2) while proceeding to upset teams who they should lose to (Arizona in week 1). I use that term lightly, as nobody should lose to Arizona.

Still, the Packers have yet to cover a spread (including a -1 last week by virtue of a tie) and the Redskins are who we think they are. We need to give them time to put some trends together for us to analyze, but in the short term, where upsets are to be had, these are prime matchups where complacency will catch out better teams, and I like the Redskins as a sneaky playoff contender through a wild card slot.

Yes, I like the Cowboys after saying how bad they were last week. This comes down to that Dallas D-line vs Russell Wilson on his own, with nothing so much as an old swinging gate between him and DeMarcus Lawrence. I don't trust Dak Prescott, but I equally don't trust thin air as a deterrent for grown men to do their job by violently assaulting his Seahawks counterpart.

Also, some other players who aren't QBs will play in this game. That's a 100% accurate statemenmt, even if I do believe this one will rest primarily on the two QBs to manage the rhythm of the contest. The reality I envisage is that this one may come down to Dak Prescott and Ezekiel Elliott controlling the ball and playing within themselves. Dak's 1:0 TD:INT ratio is a concern, but not as much as if he had given up needless turnovers like the Seahawks. Through 2 weeks, Russell Wilson has been sacked a historically bad 12 times. Take the Cowboys on the road in a slightly smaller upset of the week.

Ah Cinci, fair queen. I do like the Bengals this year, and for every insult Josh Katzowitz throws at them in Pickwatch Live, I like 'em a bit more. Mainly because that's the type of 'under the radar' stuff that suits them. NOBODY was talking about the Bengals this season, because they've largely held station in terms of key personnel. In a division where the Ravens and Steelers have very much gone backwards, however, that's enough for a big net gain.

The Panthers are going to be their usual selves - an absolute pain in everyone's neck. They'll win games in dominant fashion and then implode... I think this is erring toward the latter, but I think it could be a real shootout that the Bengals win. Their weapons in the passing game are pretty impressive, and they have already established themselves as a truly formidable passing attack, who have double the number of passing TD's (6) as the Panthers, good for third in the league.

Oh Giants, why you fail me last week? Houston are an equally big annoyance to pick so far, and I think this one might just end up being a blowout one way or the other, with a comeback towards the end. You know, like how every NFL game is now?

Both teams may struggle to stop each other on defense in this matchup, but I think the Gaints may edge it in terms of skill position players. The timing of the game may suit them better than last week's prime-time atmosphere in Dallas, too, which I don't think they were particularly ready for as a team.

Fun fact: The Steelers rank joint-dead-last in turnovers this season and are slowly disintegrating around Ben Roethlisberger's ghost. Nobody seems willing to acknowledge how bad Ben has been, but some of his throws are inexplicably bad - or at least they are inexplicable if you refuse to look at the very obvious problem that he is now a mediocre at best QB.

The Bucs lead the league in every offensive category, and while their current rate is unsustainable, that's not because it isn't built on solid foundations. A good passing attack that stretches the field will go a long way in this league, with these rules...

The Pats are on the slide, and the Lions, while all over the radar in some regards, are actually playing ok football when they avoid turning it over MATTHEW. The Patriots O is arguably a bigger no-name bunch than Brady has had since 2006 and the heady days of Reche Caldwell as WR1. Maybe Josh Gordon can give them some drugs. OR MAYBE JULIAN EDELMAN CAN WHEN HE COMES BACK IN WEEK 5 AND MYSTERIOUSLY RUN THE TABLE.

You didn't hear that from me.

I think this one definitely comes into a category of 'games that you don't like to pick, but statistically, will likely be witin a TD'. Historically, only 2 of the last 10 meetings between the two teams in Atlanta have been won by more than 6 points, and you'd have to go back to 2012 for the last one. I do think we are entering the autumn of Drew Brees's career, but the Falcons are not the Falcons of 2-3 years ago either. I think this again, feels like one where one team will head into a blowout-indicating lead, and the other will come back and make it tight.

New York Jets @ *Cleveland (-3) *- The Browns are +6 in turnover differential, leading the league. The Jets are ok, but this is where it ends...

San Francisco @ Kansas City (-6) - Mahomes is legit. Remember who told you to back the Chiefs the last two weeks as 'dogs...

Tennessee @ Jacksonville (-6.5) - The Titans are better than they look, but you can't trust Gabbert.

Chicago (-6) @ Arizona - This is how bad the Cards are: They average less than 200 yards of offense per game. That's insanely bad and dead last by some 50 yards behind...

Buffalo @ Minnesota (-17) - I tried so hard to pick this one as an upset, and in fact when tidying up this article, realised I'd left a stream-of-conscious argument with myself that explained why I simply couldn't trust the Bills to even get within 17 points. The Bills are so bad that they can't even be the worst at inefficiency. They're a complete hellhole of a team and I commend Vontae Davis for not putting his body on the line when his team have not put him in a position to make that sacrifice worthwhile.

I'm in the fortunate situation of having Kirk Cousins and the Vikings D in fantasy this week. That's a pretty big jinx ordinarily, but seriously, this is a bad game for Josh Allen to have to play as his first road start, and I don't see it ending well...