This week's Upset Watch asks whether Eli can upset the Bears in Chicago... 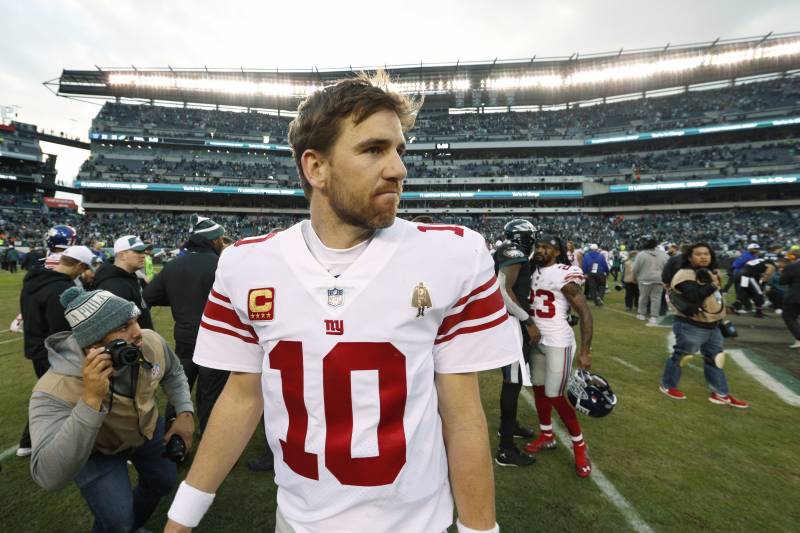 This week's Upset Watch is slightly delayed, not least by the THREE games with no spread as of Thursday that we are unable to cateogrize either way.

We're also toying with publishing this article later in the week, as although it is useful on a Thursday night, it is aimed at getting the majority correct on a Sunday, something which is far harder when written 3-4 days ahead of a game. For example, this week we're in the midst of another NFL assault case, something we didn't know until roughly 3pm on Friday afternoon.

So it makes sense to write this in the sweet spot of Friday-Saturday, rather than before, albeit we will do a TNF special every week too, featuring just that game.

Depending on when you read this, we'll be rolling out some changes to the main table. Here's a sneak peak... 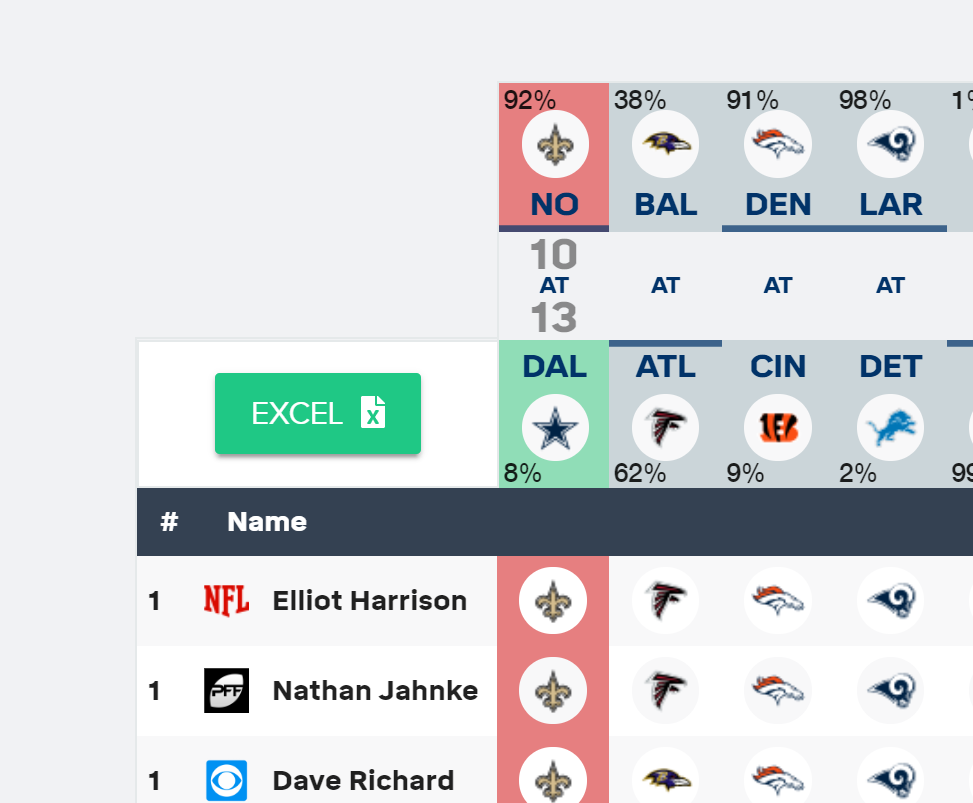 As you can see, we're adding information regarding the score for starters, but also subtle changes to the feel of the table. Instead of a 'consensus row' which is actually quite difficult to read at times, we've simply added a % for each team, so you can see the split of picks easily. Also, we'll still highlight the favorite for 'at a glance' viewing.

As you can see, we'll also offer the ability to see if the consensus was correct that week, by highlighting the winner in the top rows, so if you go back to previous weeks you can see who won, who was favorite with the experts, and what the score was at a glance. For ATS, the result will be the spread, so if a team is -7 and wins by 3 points, the winner will show as the team that covered +7.

We also have our 'favorites' system in production too, we're just deciding on the best way to roll this out to you. At the moment, the clubhouse leader is to have a button above the table that you click or tap that then allows you to select the favorites you want from the table. They're then stored as a separate tab along the top of the table (where you would currently navigate to ATS and college tables).

Both of these features will roll out this week, but we're refining them with the help of our UX (user experience) designer, Graham, who knows how to tweak small things to help you guys get the most out of our new designs.

Anyhoo, on with the week 13 picks!

The charcater of this Buffalo team is something extremely unusual. Remember in week 2, when Vontae Davis quit at half time? or when they went back to Nate Peterman in week 6 after Josh Allen got injured, only to watch him throw two interceptions, including a pick six that iced the game?

Well not many teams would come back from that, let alone win 4 games. Here's the other crazy part, they've covered the sread against the bad teams. The Jags, the Jets, the Texans (who were rough at the time) and the Titans... the Dolphins definitely fit the profile of teams that get upset by the Bills.

Want to know what else is crazy? Last week I got 8/1 on Josh Allen to score a rushing TD at any time. Whoever set that line should simply never be allowed to set a line again, or alternatively, from our perspective, should set them all...

Fun fact: Jeff Driskel is not too bad. He's a huge rushing threat (cough, see above) and will likely hurt Denver on the ground to a similar degree to Allen. I'd even go out on a limb and say that the Bengals might finish a little stronger with him behind center (and it will be behind...) than with Dalton.

The Broncos have ran some excellent teams pretty close. I mentioned it a few weeks ago, but they've largely been better against those big teams than against the worse teams, and this feels like a perfect trap game in some ways. The spread is big enough that a low scoring Broncos might still be very much in reach by the end of the game.

This is my big weird one. Mitchell trubisky is... active? Inactive? I suspect the latter, but the Bears are keeping their cards close to their chest and Mitch is travelling to New York. It could be gamesmanship, it could be that Trubisky is legitimately playing, alternatively it could be both. The Giants might think this is a bluff and Chase Daniel will start a second consecutive week, only to be faced with Trubisky.

It's all good stuff, but I am less convinced about the Bears chances in New York. The spread is a touch high for a team that is under it's backup OR under a banged up Trubisky, and for all the Giants' problems, moving the ball hasn't been one of them. I do feel like Eli Manning will curl up to sleep tonight weeping, but that's nothing new is it?

The Steelers have been pretty rough for a couple of weeks, and this is a tough end to their season, with the Chargers followed by the Raiders, Patriots and Saints over coming weeks. They'll be keen to avoid relying on wins over the Raiders and Bengals to finish 9-7, but it's entirely possible when you see that schedule that they'll end up in exactly that situation.

The Chargers and Steelers, by the way, are masters of the under. A generous 53.5 seems like an interesting proposition to me, especially with star running back Melvin Gordon out for the Chargers and the Steelers struggling to unlock their own run game.

The Texans are a better team than Cleveland at home or on the road, but the Broans seem fired up and ready to keep this game close. It's the kind of matchup that the Texans could probably do without. Most teams relish playing the Browns, but here we have a motivated, in form team that could well be a trap for the Texans.

The Rams started the season with three straight 10+ point wins, but in the 8 subsequent games, have managed it only once (at San Francisco). It's been tough sledding for the Rams against quality opposition, and while the definition of the Lions as 'quality opposition' may be stretching a few definitions, there's no doubt that they can score points in the right conditions.

This week is one of those where a lot of better teams might underestimate a few teams that are almost, but not quite, done. They're beginning to eye up the playoffs, and that's dangerous territory for any team, let alone one that specializes recently in < 7pt victories.

I don't like this Kareem Hunt business. First off, he's an idiot, second, he'll be back. The Chiefs likely wouldn't have cut him had he not lied to the team, indeed it's likely that they felt that Hunt's presence would end up being a distraction anyway.

But there's no doubt that it'll hurt this team. They're amazing through the air, but make no mistake, Hunt is the metronome that keeps this team moving on the ground. He averages 4.6yds per carry and has carried the load for this team all season long. Losing him is an upheaval, even if Spencer Ware is a more than capable backup. Ware has taken just 22 snaps this season and it remains to be seen whether he is capable of going back to his 2016 form, where he started 14 games.

I think the Raiders have shown a lot of signs of life over the last few weeks, so this isn't just one way traffic. I think it's clear that if the Chiefs play to their full potential, it's going to be a LONG day for the Raiders, but this is the beauty of upset watch, picking teams that are down and out who have a chance to upset our expectations.

Here are the rest of week 13's games, ranked by chances of an upset vs the spread: