It's week 11, and once more, let us look into the murky stats world of why underdogs can beat the spread. This week, will the Titans be another underdog winner in Indy? Or do the Broncos have any chance in LA vs the Chargers? Read on! 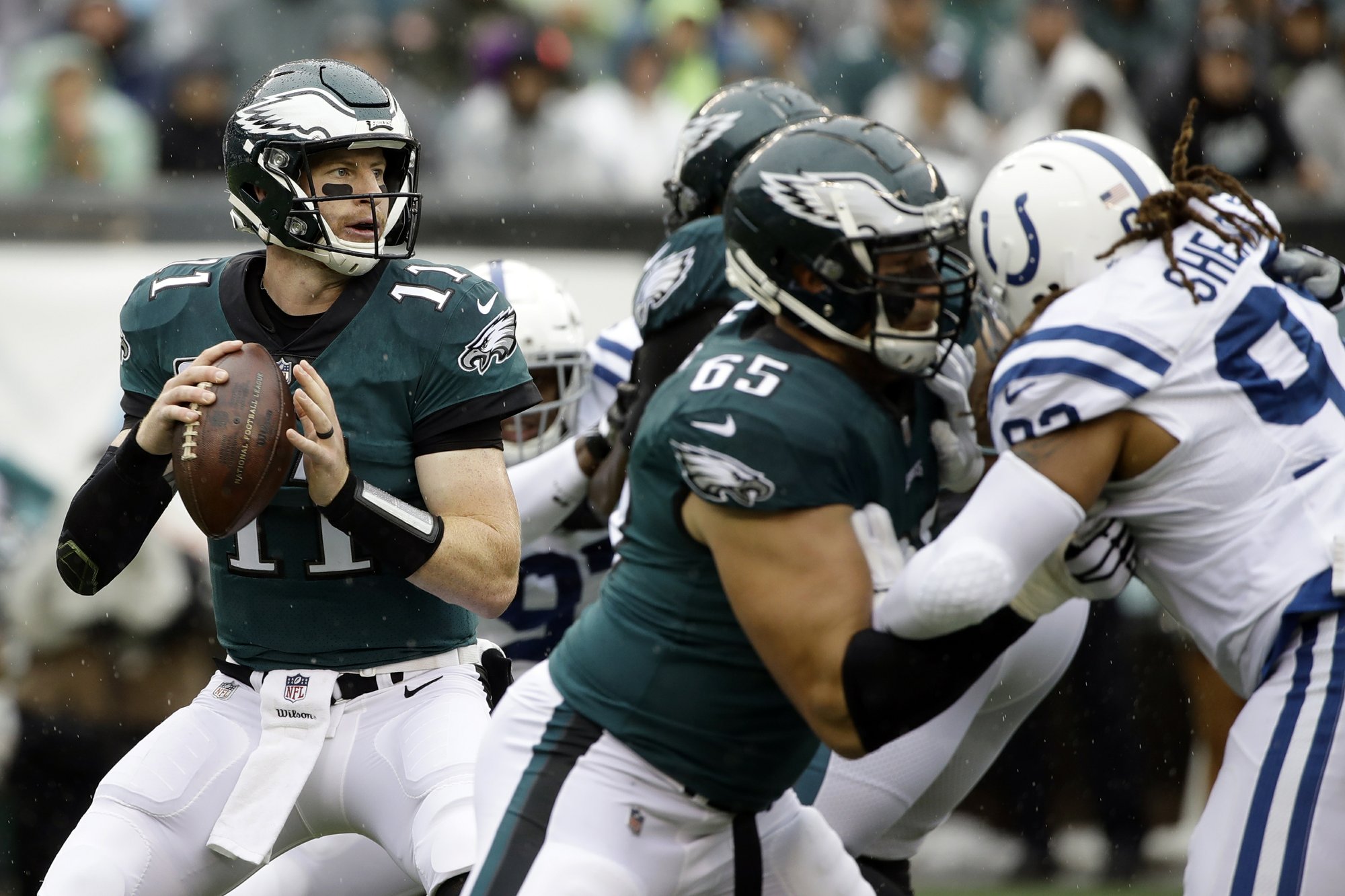 Periodically in this column, I like to tell you about the irrational propensity of the public to favor favorites vs the spread. Those numbers above? They are the record of NFL favorites this season. Pretty mediocre, right?

Let's avoid going 'full rant' here, but it's still a baffling ordeal watching fans of the NFL pick ATS winners. Our public ATS page shows the consensus regularly favors just a handful of underdogs, despite the reality that NFL favorites are 68-77-3 vs the closing spread this season.

Now, I'm not suggesting that we unilaterally pick 55% of games in favor of underdogs. A number of times over the year, I've advocated a more nuanced approach. As seasons progress, we see fluctuations in underdogs, but if you're picking somewhere around 50-50 over the course of a season, you'll never be that far wrong.

But if you favor the favorite? Well, check out this chart: 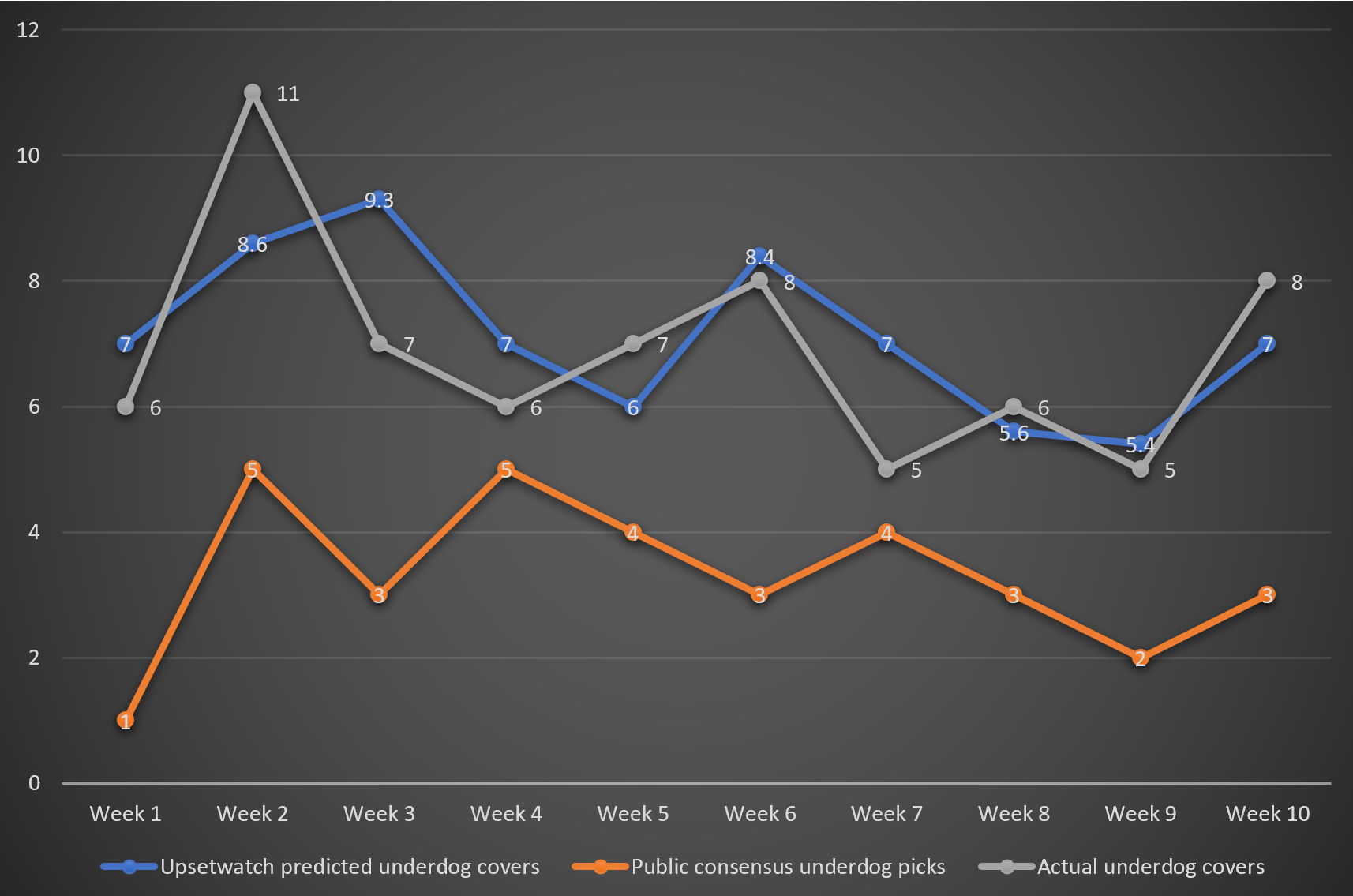 Each week I've been calculating the average number of underdogs who have won in the same week for the last 5 years, and using that as a guide. That's the blue bar. The grey bar is the actual number of underdog wins that week, and finally, the orange bar? That's how many the public were backing.

The essence of this is simple. If (when picking every game) you backed 5 underdogs in week 2, you lost at least 6 games that week before you even got one right. At that point, the onus on you to get those picks right is huge, as the words 'at least' don't mean that you actually did get them right! It's entirely possible to have picked the wrong 5 underdogs.

What's the best way around this? Understanding that the entire principle of the spread is not to ask you which team is better, it's to handicap the better team and ask if they're good enough to win by a certain amount.

Anyway, let's take a look at this week's games, where we're picking the week 11 average of 5 upsets, based on the number of week 11 upsets in the last five years. Last week of our 7 upsets, we went 7-2, let's try and get another good week in the books in a (traditionally) harder week for 'dogs.

The Bucs are a high powered offense with a complete shambles of a D. The Giants are sort of the same, except not as good. I really think that Eli Manning will struggle to see a more open OBJ than he did against the 49ers twice on Monday night, so let's not assume the Giants are about to start getting him involved. They were 'can't miss' opportunities.

Meanwhile, the Bucs somehow managed to blow a game where they gained 501 yards, scoring just three points against the skins. I don't think they'll replicate that again this week. Frankly, it's an absurd statistic that highlights how easily the Bucs are moving the ball this year, while the Giants? They're prone to digging holes for themselves. I just don't see them getting out of this one...

The aforementiond 'skins are in an interesting spot this week. The Texans are hot, make no mistake, with six wins on the spin, but I do wonder whether that yet again, the 'skins might be ready to shock another playoff contender. They too have won four of their last five games, and they covered similarly small spreads of 1.5. As a favorite, they're 1-2 this year, whereas an underdog? 5-1, and as a home 'dog, 3-0. This team likes being underestimated, and that's always dangerous.

Now, my Bears. I just keep picking against them and they keep proving me wrong, which is kind of a no-loss proposition on a personal level, but this one seems like a big stretch. The Matt Nagy effect has been huge in helping Mitch Trubisky break out this season, but the Vikings are still a better team. Just.

The Vikings have been interesting against the good teams as an underdog this season. Their two road trips to LA and Philly yielded a push and a win, while they lost against a Saints team that is crushing all underfoot this season. That said, the Bears are none of the above, and even at home on a Sunday night, in the freezing cold, I like the Vikings.

8.5pts is a LOT of points. I mean we'd expect even bad teams to have a shot of covering that spread, but the Eagles? They aren't a terrible team despite the negativity (my Eagles fan friend believes they are going to lose by more than this...), and they have made steps to improve their offense in the trade window.

The Saints are a machine, but the barrier is high here, and I fancy that it will be a surprisingly low scoring game. The Eagles are a more stern test for Drew Brees than most, despite their shortcomings, and they have offensive playmakers that I believe the Saints may be surprised by. This one all comes down to the Eagles as underdogs, which I much prefer to them as unwarranted favorites. Now seems like an opportune time to see Carson Wentz play without the crippling pressure of the first half of the season.

The Broncos have played hard recently, even when not getting results. They've not lost by more than 7 points for 6 weeks, and they have covered three of their last four spreads. Meanwhile, the Chargers are one of those interesting teams that isn't putting up huge numbers when winning. For exampole, their last 3 games, they'ves scored 20, 25 and 20 points against the Titans, Seahawks and Raiders. Not a stellar defensive group, but about right as a starting point for the Broncos, who themselves have put up 45, 23 and 17 in that time against the Cards, Chiefs and Texans.

I think they have a great chance to grab a spread victory here. They've been somewhat unlucky at times in their recent run (one win in seven ain't great, stats fans) but they've played hard at times in that patch, and only the Jets game stood out as a capitulation.

Now, this was originally tenth on this list, but I'm wary oof this QB situation in Baltimore. First of all, this is Lamar Jackson's first start, albeit unusually for a backup, he has seen game-time this season already, including a TD pass. I wouldn't have considered him an outright rookie, but do we know how healthy he is? We do not. There is a strong chance that RGIII will see time today, and that all just seems like a whole mess that doesn't look good.

This is somewhat of a wild-card pick, but AJ Green is also a possible play today, and that makes this worth a shot.

The rest of week 11's games, ranked bny chance of an upset: