It's the big one, can the Rams get an upset against the Patriots? Upset Watch breaks down the stats that matter... 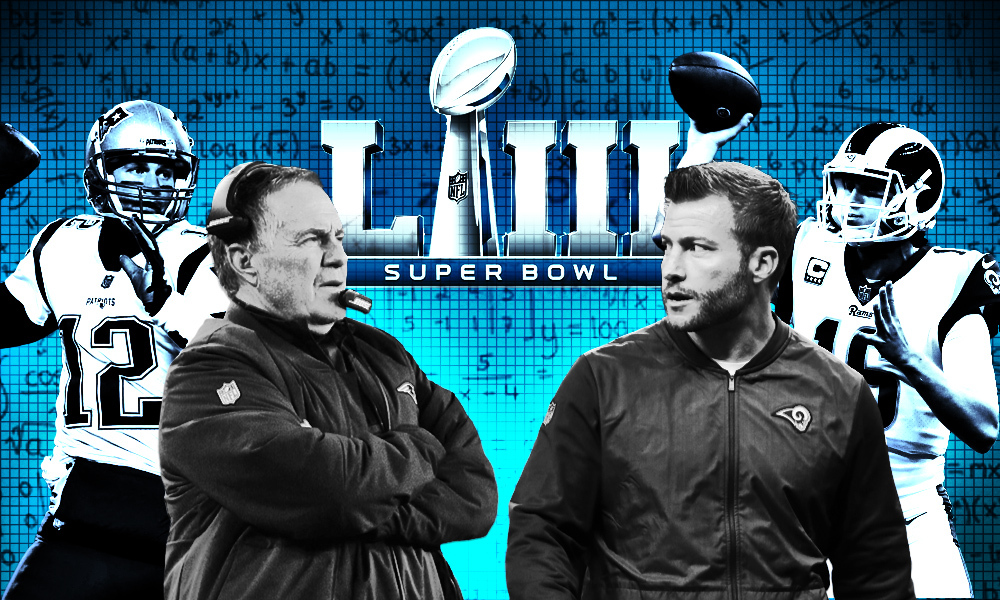 Welcome to the final upset watch of the 2018 season.

Today's article will have a lot of information, but don't be daunted. I've put it into lists and will be breaking it up with explanations of the stats behind it, before making my prediction at the end. We can do this!

Last year, we had the Eagles winning against the Patriots despite a 4.5 spread, so we do have form for this, but will we end up with a Rams or Patriots selection this year? Read on to find out...

As with last year, we'll be looking at the underlying stats that tell us as much as possible about each team's form. This year, for the first time, I'll be referring to our new 'matchup hub' system that snapshots every game statistically at the point of playing, as opposed to the total throughout the season.

Why do we do this? Well, one of the core problems with stats over the course of a season is that they don't necessarily reflect how well a team was playing at the time of a game. There are ebbs and flows as seasons progress, and while we learn more as the seasons draw on about each team, we often need to see such data in the context of who they were playing and how well they were playing at the time.

For example, the Rams started hot with their passing game this season, but since their week 13 bye, it's well documented that they've flipped that round and had a run-heavy attack. If we're trying to be as thorough as possible, we need to know who the Rams are now and who they were earlier in the season to judge their likely gameplan.

The format for this year's upset watch will be in a list of 12 things we found in the data. Next year, don't be surprised if we have the capability to drill further into the statistics than ever before thanks to our forthcoming 'Pickwatch Pro' offering, but for now, here's a flavor of where we're going with the site as we break down Super Bowl LIII...

1) Both teams were very good against common opponents

Both the Patriots and Rams have faced off against the Packers, Chargers, Bears and Chiefs (twice in New England's case). The Pats are 6-0 against those teams, while the Rams have a solitary loss against the Bears to finish 4-1.

What is most interesting about both of these teams is that they have common trends that they employ when facing good teams, and a completely different strategy against others. To beat the best, you have to be able to up your game in areas that the medicocre teams of the NFL cannot. For more, let's go deep...

2) The Chiefs and Saints are relevant in the Super Bowl... kind of...

Both Kansas City and New Orleans could very easily have been fielding the inane questions over the last few days in Atlanta, such was the narrow margin in both the AFC and NFC title games. A missed call cost the Saints, an archaic rule gave the Chiefs no opportunity to run an offensive play in overtime. They can rightly feel somewhat annoyed, but those games tell us a lot about the two teams who did make it.

When we're looking for relevance between games that any two teams have played this year, we want to see how the Rams and Pats did against teams that mirror their strengths and weaknesses.

In a 4 team league, it's easy to see how the Rams and Chiefs were reasonably closely aligned in strengths and weaknesses, while the same was true of the Pats and Saints. This table shows the top two in each stat highlighted, illustrating the parallels:

Helpfully, the Pats played the Chiefs twice, and the Rams played the Saints twice, which means that those games are incredibly useful indicators of how the two teams might play on Sunday against their respective opponents...

3 Expect a lot of passing

These two teams light it up against other teams that have the offensive firepower to hang with them.

The Rams faced the Saints and knew that the tough Saints run D was not going to yield much on the ground, so they went through the air both times. They threw for over 300 yards in both games while rushing for less than 100. So why did they wi9n one and lose the other?

Well, the Saints in week 9 were a free-scoring behemoth. They were in many ways unstoppable, scoring 45 points or more in three consecutive weeks. By the NFC title game? Not so much, They'd gotten away from their run game and become heavily disjointed on offense generally. The difference in the game wasn't the Rams, it was the Saints.

The Patriots moved the ball incredibly well in both games against Kansas City, both in the air and on the ground. 500+ yards of offense in those games tells it's own story. The problem? They also gave up a hell of a lot of points and came awfully close to blowing it.

What do these games tell us in a nutshell: That both teams like to move the ball through the air, but the Patriots are capable of shifting up several gears against any team they deem to be 'high-powered'. The big question is, do the Rams still have that capability?

The Patriots lost 5 games in 2018, and in each of them, reached less than 100 yards on the ground. Contrast that with their playoff performances of 155 (LA) and 177 (KC) yards rushing and 4 rushing TD's in each game, and we see where the key to the Patriots' success is... or do we?

The breakdown of the New England playoff victories may seem to favor the run as a big factor, but in both games, the damage was really done through the air. Sure, it was invariably punched in with a run, but Tom Brady hit Julian Edelman, Rob Gronkowski and Phillip Dorsett time and time again over the middle. Think about the overtime drive - with the clock not an issue - by Brady against Kansas City. The temptation in the cold is to go conservative, run the ball and not panic into trying to get chunk plays. Instead, Brady hit Chris Hogan for 10yds, Edelman for 20yds, then Edleman again for another 15 yards, and finally 15 yards to Gronk. Altogether, they ran the ball just once before they got to the Kansas City 15 yard line, throwing 9 pass attempts instead.

How important is this? Well, LA are right in the middle of the pack statistically on run defense, but there's some nuance to that. In their last two games, they've given up just 50 yards rushing each to the Cowboys and Saints, both averaging over 125ypg heading into the matchups.

So the Rams defense is playing incredibly well against the rush, but the Pats can move the ball without the run. Sure, they'd like the ground game to get going, but I think the way the Patriots play, they won't shed too many tears if they're forced to move it through the air.

5) Sean McVay is an X factor

Sean McVay is rightly lauded as the standard bearer for the new breed of offensive minds in the NFL. At just 33, the Rams HC is called everything from a 'phenom' to a 'professor', and it's hard to argue with that when you see the way he puts together gameplans.

Since the Rams had their week 13 bye, the narrative has been that they have been a different team. To some degree that's correct, but I think the more you analyze the games they won with free-scoring passing offense, the more it makes sense. The Rams have always been a heavy-run offense by nature. They put 150+ rushing yards on the Chargers, Seahawks and Broncos (270!) early in the season and led the league in rushing TD's.

They don't pass because passing looks nice, they pass judiciously to move the ball when they need to in close games. I believe they'll pass for more than 300 yards in this game because they will need to move the ball consistently in all four quarters, but I don't expect them to be reliant on the pass unless the game situation is critical. McVay has built a team with incredible balance, but make no mistake, they're the number 3 rushing team in the league for a reason.

6) The Patriots haven't been amazing in Super Bowls, but they always have a plan

The last three Super Bowls have seen the Patriots spread the ball out. Sure, Edelman and Gronk will get the most attention, but all of the above wide receivers have caught five or more balls . Every time people laser in on Gronk and Edelman as the biggest threats, Belichick uses the peripheral receivers to great effect.

This year, I think Hogan Cordarrelle Patterson and Phillip Dorsett in particular may be the beneficiaries of such a gameplan. Dorsett is a great sleeper pick to have one of those Patriot Super Bowl performances. He caught 10 balls on 13 targets over the last three games, with 3 TD's to boot. Brady trusts him and he's the most reliable deep threat that the Patriots have against a defensive back in Marcus Peters who has struggled this season

This one has been as tough as it gets.

In favor of the Patriots:

In favor of the Rams:

I always approach this pick empirically. When I first analyzed the Patriots and their rushing stats, I was sure that this was a bad matchup for them. After all, they had roundly failed to win without a solid run game.

But of course, like most of you, I'd seen enough to know that those stats were heavily skewed by positive game situations. There's a reason, for example, that they were throwing for 340+ yards as well as those big rushing gains.

Ultimately, this comes down to the Patriots being able to step up their offense in a way that the Rams do not seem to currently have. Sure, they can move the ball, but they rely on balance. The Saints game should realistically have been a loss, and had it not gone to Overtime, would have meant another decidedly average performance through the air.

There's a distinct possibility that in the meaningful first phase of the game, neither team has many rushing yards. That doesn't mean neither team will get them later in the game if they're ahead, but the reliance on the pass clearly favors the Patriots.

For that reason, I'm reluctantly tipping New England to win. Of course I'd love a Rams victory, but this seems like the ultimate case of everyone leading with their heart rather than their head. The Patriots are playing better than any team in the league right now, and more importantly, they're doing so at will.