It's the final four, but will it be the new breed or the old guard who make it to the Super Bowl?

It's been a busy year and I wanted to reflect on that very quickly. We're in the process of rolling out our next big feature today and tomorrow, Matchup Hubs.

Matchup Hubs are our statistical centre for each game, and for now, encompass some of the key stats you'll want to consider when picking games. Our intention is that over this offseason we'll refine and expand matchup hubs, adding stats retrospectively to every game in our database. You can find the stats above the consensus line on the main page, and they'll soon have their own home: 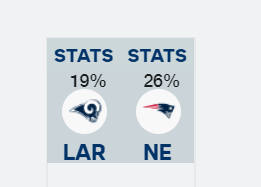 Anyway, here's a run down of the stats in matchub hubs v1.0:

In the header of every matchup hub you can see...

The next section is devoted to the two schedules of the teams involved. You can expand to see the whole season if you like. On mobile, you can switch between the two teams from the table header as below: 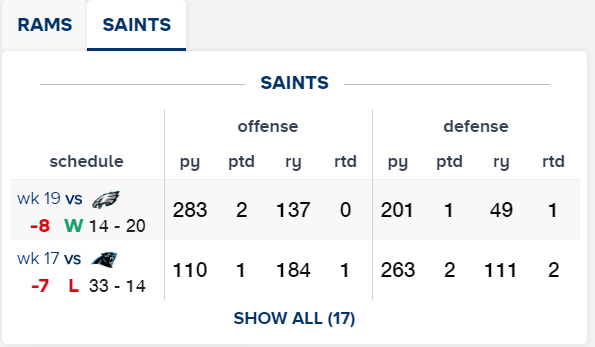 In the schedule you can see... 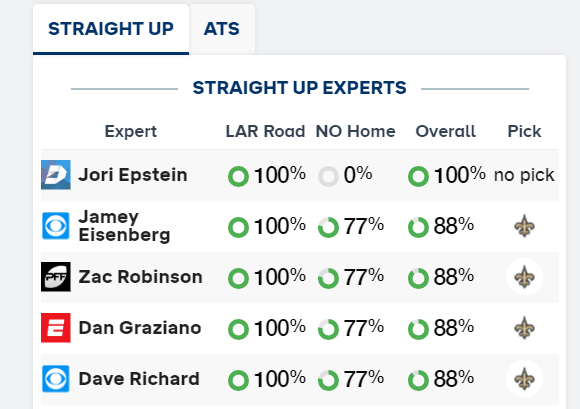 On expert tables you can see:

The game stats are the more advanced stats that we are looking to include around the site. These stats are taken from the NFL's own game records and stats book for each game, down to the play by play data.

As both offenses in the Rams and Saints game are good, as you can imagine, the stats look quite similar. You can see that both offenses score a similar number of points and rank 2nd and 3rd in the league, respectively. The colored radial indicates where they stand in relation to the rest of the NFL, so green means they rank at or near the top, while red means they're bad compared to the league as a whole.

We hope you like matchup hubs. They've been an enormous task for us because it's the first time we've used external data integrated into our systems, and we've spent the last month searching for anomalies and ensuring that the stats are accurate. Indeed, our stats are rolled up from the play-by-play level, and as part of that, we discovered some interesting interpretations of that data being used by the NFL and other major companies who carry it. Naturally, we'll be looking to add much more to our statistical repertoire over the next 9 months.

If you like matchup hubs or have any suggestions, we'd LOVE feedback, hence launching now before the Super Bowl. It's not perfect in terms of layout, so we're interested to see if you can suggest different views or ways you'd like to see everything.

Anyway, I've gone on too long, let's get on with the upsets...

What do you think of with these two teams? Airing it out? Interestingly, these two teams rank 25th (LA, 54%) and 28th (NO 52.6%) in the league based on the percentage of pass plays called. In fact, despite the perception of them as being high powered, pass-first offenses, they are incredibly reliant on the running game.

This fact threw me off, in fact I was lasered in on the Rams from early in the week, but their reliance on the run worries me. The Saints are an extremely strong rushing D, ranked 2nd in the league, giving up just 78.4 yards per game. This is strength vs strength as the Rams average a 3rd in the league 147.3ypg on the ground.

What does this mean? Well, it means one of either two things: The Rams must find a way to push around the Saints D line, or they must put the ball into the hands of Jared Goff and beat them through the air. Last week was a 'steady' outing for Goff and ensured he didn't go 0-2 in his first two playoff starts. I think that was important for Rams coach Sean Mcvay, who would not want an early monkey on the back of his chosen franchise leader.

But is Goff ready to beat the Saints through the air? Well... maybe. In that regard, the Saints allow an awful lot of yards and actually rank 29th in the league. It's entirely possible that the Rams can win this one by passing, but it'll be coming at a time when Goff's performance has dramatically reduced in this capacity.

Before the Rams' bye in week 12, Goff was throwing for 2.4 TD's a game and 310 yards on average. Since the bye? Make that 1 TD per game exactly, and 213ypg. That's a huge dropoff, especially if you consider that he also threw 4 of those TD's in week 17 against the 49ers who played directly from the beach.

I just don't know that I can trust Goff - who I really rate - against Drew Brees, who only gets better as the games get harder. Last week was an incredible performance by any standards, and I have to take the Saints to head to their arch-rival Falcons' stadium in two weeks time.

This one is a killer. Like most people I truly believe in Patrick Mahomes and the Chiefs and have backed them since week 1, so to drop them now feels awful. They are, as the French say, legit. Unfortunately, I have been wrong about the Pats before and I'll be damned if there's not room on that there bandwagon for a latecomer.

This one doesn't hinge on Mahomes, however. It's all about the defenses. The Chiefs got lucky last week, playing against an Indianapolis team that heralds from a dome and for whom playing in the snow and cold is a difficult proposition. This week, they not only play against a team that is acclimatized to such conditions, but they're going against the masters of the deep freeze.

I'll put it as simply as possible - I think ;ast week was a huge anomaly and the Chiefs got very lucky that the Colts (wait for it...) froze. Sure, give that Chiefs D credit, but I think the Pats will have seen how anaemic the Indy offense was in the cold and know that they won't be slowed down as much.

Perhaps most scary for Indy should be the Patriots performance against the rush last week. Just 19 yards allowed against the Chargers was exceptional, even though the Chargers had to throw a lot more than they'd have liked. My worry for the Chiefs is do they have a plan B? Mahomes, despite his amazing ability, is a Texas kid and this snow is not 'normal' for him either. If they go to the run in the freezing temperatures predicted tomorrow, the Patriot D is equipped to stop them, whereas the Chiefs D? It's 27th vs the run and 30th vs the pass...