Week 9 is always a low point for underdogs, but we still have 5 games to pick this week that we think can see an underdog cover the spread, and we also have a couple of potential straight up winners in there too. Let us guide you through the murky waters of week 9... 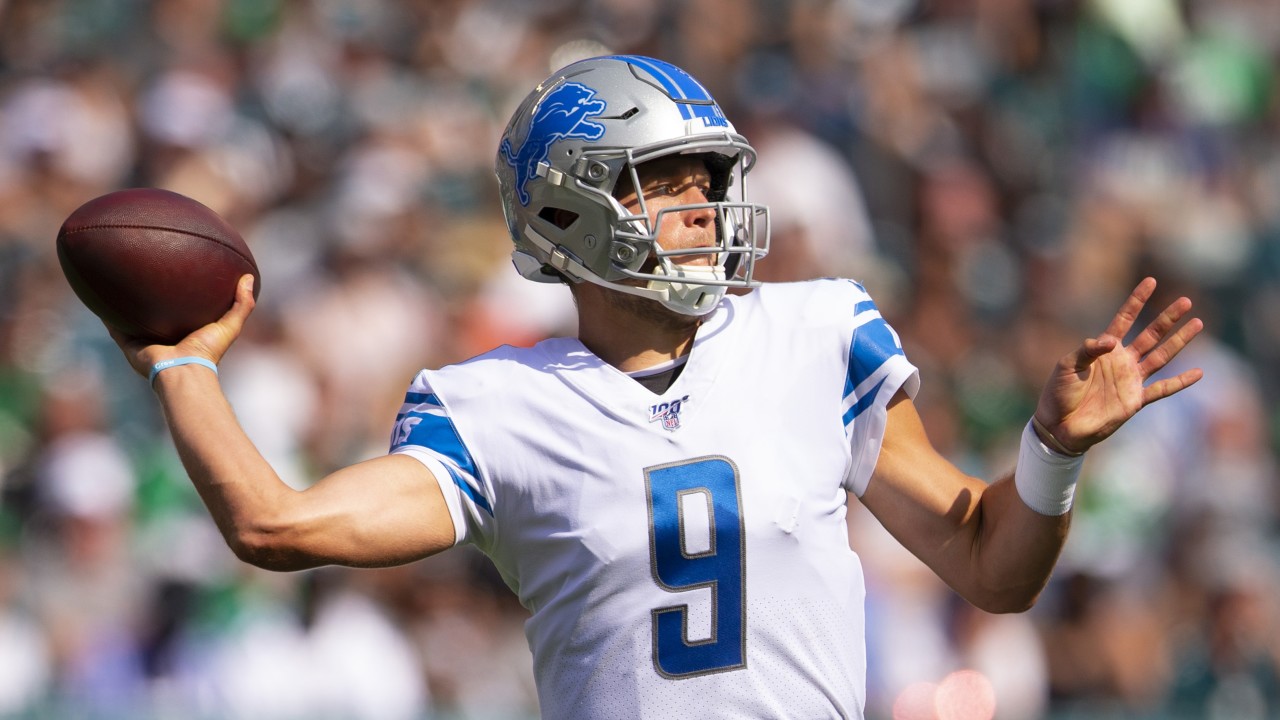 We’re on the cusp of some exciting launches here at Pickwatch, but our development team are asking that I definitely don’t tell you that game-changing features are around the corner, so I’m definitely not going to do that. Instead, let’s get straight into the picks!

Week 9 is where it all goes seriously downhill, with just 5.5 covers, but let me tell you a little secret… there’s a cool ;glitch in the matrix’ week coming up next week where we can go all in on the dogs again, so sit tight, we’re picking 5 underdogs, but next week… well, we’ll be picking a lot more!

>>>>> gd2md-html alert: inline image link here (to images/Upset-Watch0.png). Store image on your image server and adjust path/filename if necessary.
(Back to top)(Next alert)
>>>>> 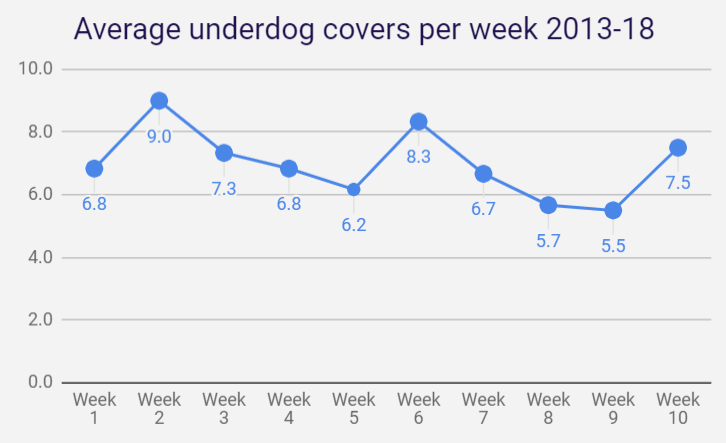 *Note: London games are not counted towards home/road stats. Ties are discounted.

Ok, the odds aren’t great. Home dogs are not in a good position, winning just 1 of the 14 games this season where they have faced a spread greater than 4 points, but they have covered 4 times. It’s not great, but there are occasional spread that stand out as being slightly out of whack, and this is one.

The 49ers D is formidable, they haven’t given up more than 20 points in a game yet, but 10 points is a lot of points given that Arizona averaged 30 in the previous 3 games before their New Orleans slip up. I think despite the D, the Cardinals can stay within 10 points and they still have a faint playoff hope to cling to.

We don’t pick London games, but if we did, we’d take the Jags. They have a tiny home field advantage because so many of their players have made the trip before, and the early start will be less jarring to them, having done it before. This is a 9:30am Eastern game, which makes it very hard for teams to avoid the travel issues that come with going to London by staying in their own body clock rhythm. Jacksonville are 3-1 in these early games over the last few years, so it’s worth factoring that in.

I hate this game. As a Bears fan, it’s very hard to see what happens from here with Mitchell Trubisky, and last week, when picking the Eagles to beat the Bills, I emphasised how important it is to have hope. The Packers and Vikings pulling away - and the Lions playing well - makes the Bears last in the NFC North. 5 points is tempting, but this team has been poor against good quality opposition. I’m on Philly here.

This game is a pick’em so… there isn’t an underdog! We’re taking the Colts, because Jacoby Brissett is legit, and James Connor is hurt, but as there isn’t an underdog to pick, it is not part of our calculations this week. Did I mention I like Brissett? This is the third week in a row, but seriously, the guy is a huge star in the making, even though he looks like he’s about 46 rather than 26.

This one is off the board until Patrick Mahomes’s status is known. If he plays, I’m taking Kansas City to win, but if the line shifts heavily towards them, I would be tempted to say that the Vikings may cover. ANyway, we’ll update this when we know more.

This one was a tempter. Regular readers will know I’m high on the Dolphins to cover (and they’ve duly covered 3 straight) but this is an interesting matchup. I actually like both of these teams in small doses. The Jets D is the real X factor here though. They’ve had a really tough schedule, but this is the first in a stretch of eminently winnable games and I think they have the talent to make the Dolphins’ day a miserable one.

Hardest game of the week to pick, but I’m erring on the side of the Panthers, who when they’re hot, are really hot. The Panthers have won 4 games, and the average margin of victory? 10.5 points. They haven’t won one by less than 6 all year. The Titans are a miserable annoyance to us this year, but they are up against the MVP elect in Christian McCaffrey, and I don’t see them stopping him.

This is a tempter for upset of the week. The Bills are ok, but 4 times this season they have failed to score more than 17 points. 9.5 is just too many, even against the anaemic ‘skins offense. When your best games have come against the Dolphins, Bengals and Giants, it’s hard to believe that the Bills are truly legit yet.

I’m all on board the Detroit upset train now. No offence to Lions fans, but they come across generally pretty defensive about their team on twitter. We get tagged in Profootballfocus’s weekly picks, so we see the replies they get to their tweets. They’re INSANE. You would definitely think that a team that had about 10 years of bag-on-the-head football in recent memory would be grateful just to be doing ok, but you certainly would have learned not to take offence when people pick against you.

Anyway, despite that, I’m picking them to win. They’re a good team and this is a tight enough spread to say they are effectively neutral in the eyes of Vegas. It’s a strong contender for upset of the week, as I think they’ll win.

Boy do I hate this pick, but whenever I hate the pick, that tells me I’m on the right track. We love underdogs on the road when they’re +4.5 or more, and that’s because generally, they get undervalued and the spread gets exorbitant. Seattle is 2-2 at home this year, and the two they won were 1 point victories over the Bengals and Rams, so in essence, they would not have covered this spread at home once this season so far. In fact, they’d only have covered it twice all season, and the Bucs are - despite their flaws - powerful enough to cause some major problems.

I hate this pick. The Browns actually won this exact matchup last year, by 1 point. I think they’re a better team this season, but there’s no doubting that they’ve severely imploded mentally over the last week. You take a blowout to the Pats on the chin and move on, because EVERYONE gets blown out by the Pats at some point. To have made such a big deal out of it belies the lack of leadership that they have.

But Denver? They have scored over 20 points once this season, and that was almost a month ago. They’ve put up just 11.5 points per game over the last 3 games. Disaster awaits.

The Chargers eh? Is this the team we want to go out to bat for? Are these the players that we think will slay the mighty Aaron Rodgers on the field of battle? Well, probably not, but the Packers are not great on the road in the pacific time zone. Maybe it’s the heat, but they’re 2-4 on the west coast since 2013, and this rare trip could make it 3 losses on the spin.

A quirk in scheduling means this is the first time these two teams have met in California for 8 years, but a quirk in Quarterbacks refusing to age means that the two teams have the same signal-callers at the helm. The last time? A 45-39 Green Bay win in a barn-burner.

Ohhhhh my word. I think we’ll find this one ends up being a ‘clutch’ game by our definition (where the expert opinion is split heavily). Right now, Pickwatch fans are indeed 74-26 in favor of New England, but that’s in itself unusual. The Pats have not been less than 89% favorites with our fans this season, and managed the incredible feat of being picked by 100% of fans in week 3 to beat the Jets (out of tens of thousands, not a single person, even a Jets fan, thought they would win!).

But it’s not just that. The Pats have had the most ridiculously easy schedule this season, and this is genuinely their first real test since the Steelers on opening weekend. Even that was a damp squib, and this is a new level. Can Lamar Jackson pull off heroics at home? Ordinarily, we say nay, but these home underdogs with small spreads do pretty well against the spread, winning 57% of the time. That means of our 4 games in that criteria, we had to pick at least two, and this one fits the bill. Or the BILL. You know? Like Bill Belic… you know what it doesn’t matter.

Dallas are another team that are horrible to pick, but last week, they got back on the horse against the Eagles. Or something like that. That weird 3 game losing streak looked like derailing their season, but in the weak NFC East, they’re still easily favorites to win and make the playoffs, and the Giants are a good reason why.

In the midst of a 4 game losing streak, the Giants have just not managed to play well against good opposition. Their sole victory (we don’t count wins against the Redskins) was a short week turnaround against the Bucs in week 3 by a single point, and nothing about the way they have conducted business this season suggests that they’re ready for Dallas in primetime. They certainly weren’t in week 1 on a Sunday afternoon, losing 17-35.