This week's upset watch previews the games most likely to result in underdogs covering the spread. Week 11 is one of the least upsetty weeks of any season, so picking games is a true art this week. Let's see who we have, shall we? 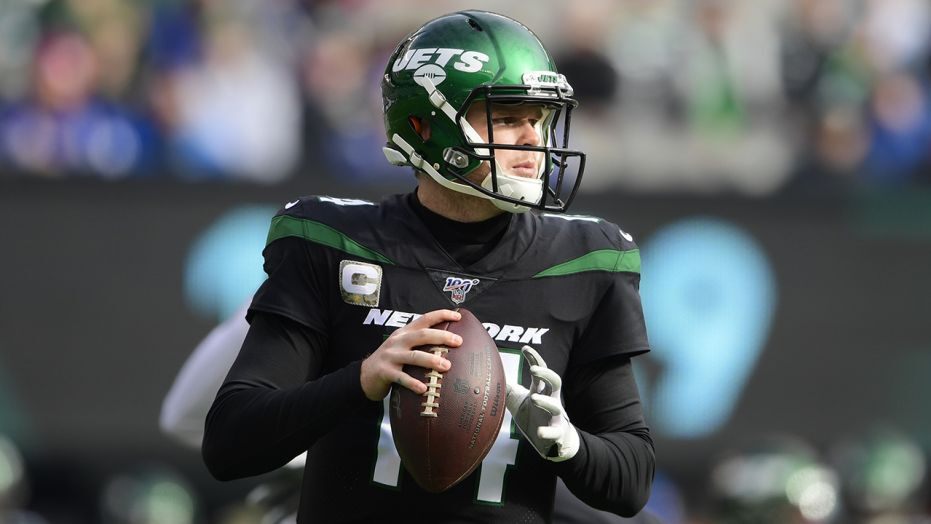 Each week we dissect the stats that make up the potential upsets in the NFL slate. We particularly focus on the chances of ATS underdogs to beat the spread, as an inordinate amount of public money invariably goes towards favorites.

Did you know that on average, week 11 sees the least number of underdog covers all season? That’s not always strictly true, we had 10 last year, but the average is actually 5 over the last 5 seasons (including that big 10 outlier). 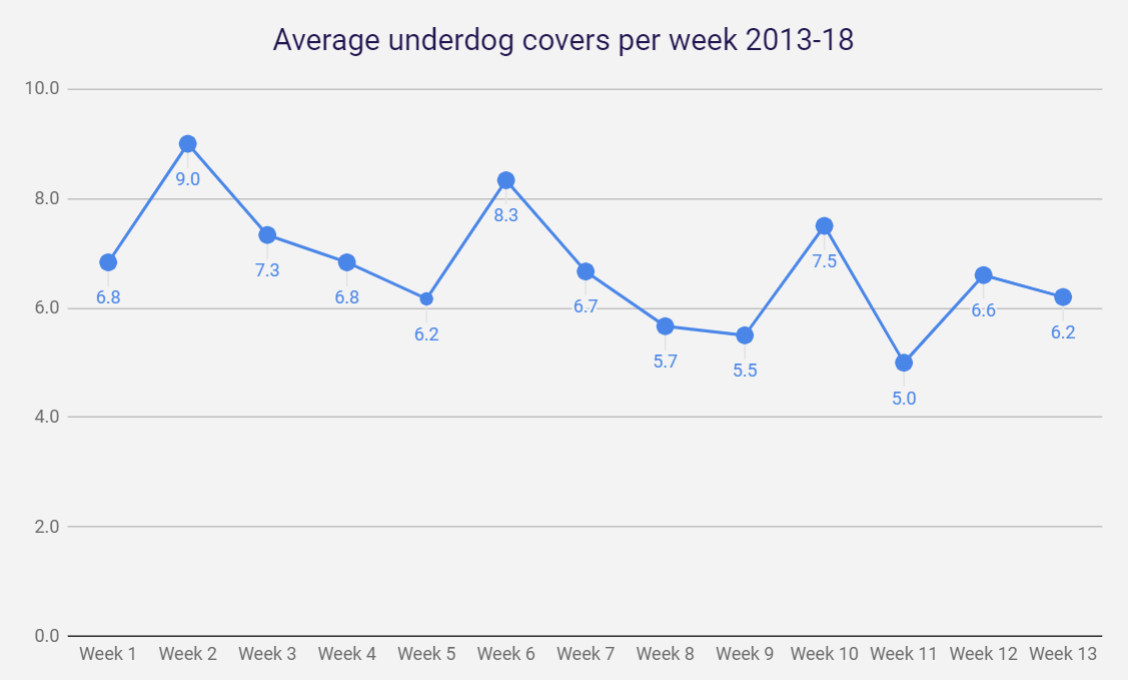 This trend means that although upsets are up over the season on previous years, we should be ready for a big drop of as the season reverts towards the mean. We’re going with 6 this week, taking into account previous years trends, while factoring in potential increases based on this season’s slight advantage to underdogs so far.

There are reasons to like Pittsburgh, but last week’s victory against the Rams was primarily down to the ineptitude of LA, who put up their worst road performance of the season, including season highs in turnovers and sacks, and a season low passer rating by Jared Goff. Put simply, the fact that Pittsburgh still let the Rams into that game was the biggest surprise.

The Browns have played to the defense of the teams they’ve faced. Extraordinarily, they’ve faced the top 4 defenses (by yards allowed) in the league in a 5 week span, averaging 13.5 points against them. When they faced the Seahawks (ranked 24th), they put up 28 points. The Steelers rank 12th in this category, or above average, and I think they’ll get it done.

We’ll pick this game once Matt Stafford’s status is known, but unless he’s fully healthy, the lean would be heavily in Dallas’s favor.

This is a bit of a trap game for Buffalo. Sure, they’re a top 5 defense, but they’re also struggling to put up enough points to justify this spread. The Dolphins (as we have correctly predicted during this run) are actually scoring an average of 19.8ppg in the last 4 weeks, and have covered 4 straight. This one has been skewed dramatically by the 4 <10pt games the Dolphins put up in the early part of the season.

This seems a tempter, but last week was an aberration in the Falcons’ season. This is a magnificently bad defense, I mean it really has to be seen to be appreciated. They have not had a turnover since week 5. Remember week 5? No, us neither. In the same span, the Panthers have managed 14 (fourteen) and caused merry hell for their opponents. The biggest loss is of course TE Austin Hooper, Matt Ryan’s most reliable target in the red zone. This spread could be interesting, but the Panthers have one of the best rushing attacks in the league, and the Falcons have yet to win a game where they gave up more than 60 yards on the ground.

The worry here is that Minnesota are very, very inconsistent, but they have covered 10 points in all but one of their victories (last week against the Cowboys as underdogs).

The Broncos, despite their extraordinary defense that has more or less given them 3 victories against all logic, have struggled, but last game they scored a (joint) season high 24pts with Brandon Allen at QB, and I think it’s worth seeing how this goes before we start anointing them 10.5pt underdogs.

How do you gauge the Ravens? Lamar Jackson is playing in that moment that we’ve seen from the likes of RGIII (his closest comparison and backup) for a fleeting moment, but Jackson’s skill and ability outstrip both Griffin and his most frequently cited paradigm, Michael Vick. He’s on pace to destroy Vick’s single season record for rushing yards by a QB by a solid 200 yards. He’s also an effective passer…. But you know all of this.

How are the Texans going to stop the Ravens? Well, the biggest factor may be that a lot of their games - all but two - have ended up as shootouts. The closest we can realistically get to this game in their schedule is the (complete opposite in QB agility) Saints in week 1, where they lost by only 2 points. I think this may be the upset of the week, and I suspect that whatever happens, the Texans will have a shot to win this game.

Also, let’s appreciate the de facto game of the week, and arguably one of the best of the entire season.

Leaning towards Indy here while the QB decision is up in the air and Jacoby Brissett is pegged to start. On the off chance that Brian Hoyer starts, I’d be shifting dramatically to the Jags. Indeed this is a tempter, if only because Nick Foles started solidly in week 1 before injury, completing 22 of 25 passes for 2 TD’s and an interception. That would be enough to beat Hoyer, but I fancy the Colts to win this one by more than a field goal.

Oh god the Bucs. They have earned this one: We’re picking the Saints with absolutely no qualms. Tampa Bay have simply been extraordinarily unreliable, failing to cover 5 straight and managing just 2 all season (both large spreads in fairness). The Saints are keenly aware of their offensive woes last week however, and I think they’ll be out to prove a point and not let up even when ahead. Regardless, sometimes the simplest trends are the most telling, and failing to cover in 5 is bad, bad form.

Pick of the week! Unsure what is going on here. The Jets, as we said last week, are not a total disaster under Sam Darnold (albeit he has hardly been reliable), but Washington are a mess of epic proportions. When we're looking at road underdogs, it's worth considering that they're still winning over 57% against the spread this season, so a +1.5 spread to a team that can actually score points, against a team that simply cannot, is a red rag to a bull.

The Skins have scored more than 9 points just once in the last 6 games, and haven’t scored more than 20 points all season. The Jets are not incredible, but they don’t need to be, and winning this one by less than a field goal is the clearest pick for upset of the week.

This is a difficult one. The Cards have faced three double figure spreads this season and are 2-1, including one against the 49ers themselves in week 9. As good as the 49ers defense is, it’s arguable that a 3pt win against a rookie QB - however good the pedigree - is actually a pretty telling result. The 49ers have actually struggled against the spread (1-3 in their last 4 games) and this spread is the largest of the week, despite the aforementioned 3 point margin just two weeks ago.

The Ryan Findley experiment… has to happen. In theory. The Bengals would like to know what they have, but the likelihood is that they’re headed into next season with the no.1 overall pick, and playing Findley cements that. It’s also a prime candidate for the type of game that the Raiders would ordinarily not be favored by this much for, but because the Bengals are a complete disaster, they could easily end up losing by 3 scores or more.

Interestingly, according to our database, this is the second highest Raiders spread as favorite in the last 5 seasons, second only to a -14 spread against the Jets in 2017. The result? A 25 point win for the Raiders.

Ordinarily, this would be game of the week, but the Pats are quite far ahead of the Eagles at this point. This is the first meeting between these two teams since the 2017-18 Super Bowl, but while the Pats have maintained their good form, the Eagles have become inconsistent, making this game difficult to pick. The defining factor? While the Eagles have performed well against the low-scoring, stingy defenses, they’ve failed to have such good form against teams that can put up points too. What do we mean? Well, the Eagles beat the Bills, Bears and Packers (combined average points against, 18.2, combined average points for 20.7) but when they’ve faced more well-balanced opposition? Well…

The Vikings and Cowboys are good examples (avg points against 18.5. Avg points for 27.0) Both put up 35+ points and the Eagles played exactly to type. They can score more than many teams, but they aren’t high-powered enough to keep up with this Patriots offense.

This is a comeback game for the Rams, and it needs to be. The corresponding game last season ended in a low scoring win for the Bears. The worry is that the Rams have become a complete mess on their offensive line, with injuries and poor play leaving Jared Goff brutally exposed.

That said, although the Bears defense is exceptional, so was last week’s complete implosion by the Rams. They can put up a lot of points, averaging 26.8 pts in the rest of their games this season. The Bears have a problem in that they can’t score points, even despite improvements by Mitch Trubisky, and the biggest factor here is likely not the Bears defense, or the Rams offense, but the Rams defense.

Tricky. We don’t know about Mexico City yet, and both of these teams are technically on the road. For that reason, we’re discounting it from our general count of upsets. The Chargers have been a lot like Tampa Bay (in fact we say this every week) in that they’re utterly unreliable. It would not surprise anyone if they came good and upset the Chiefs, but as all things are even, the spread isn’t big enough to tempt us until we know more about the altitude effects on 37yr old QBs vs 24yr old QBs.