The Rams Need to Stop THIS Receiver to Win the Super Bowl
Why Ja'Marr Chase and Joe Mixon aren't going to be the keys for a Bengals victory. 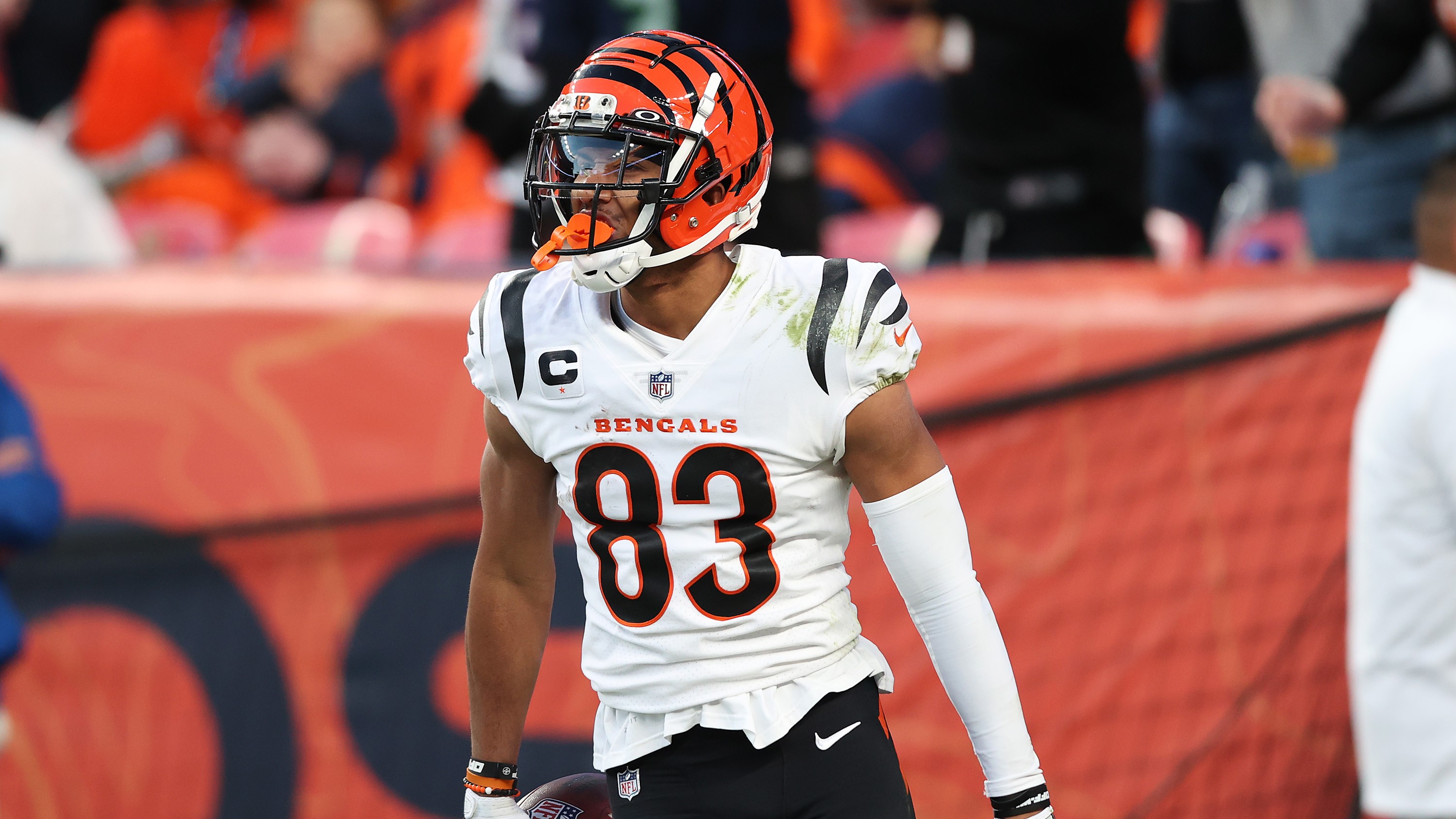 Tyler Boyd - not Ja’Marr Chase, not Tee Higgins, not Joe Mixon - should be the Los Angeles Rams' biggest concern as they get set to face an explosive Cincinnati Bengals offense in Super Bowl LVI.

I know, I know. Chase is the phenom, the blink-and-you’ll-miss-him playmaker who has broken the very idea of what rookie receivers could and should do. He hasn’t just galvanized and added oomph to the Cincy offense; he’s transformed the entire outlook of the organization.

Figuring out how to fend off Chase will be central to the Rams gameplan. But it’s only one part. What’s fun about studying the Bengals offense (and, to be frank, Burrow’s off-script creativity aside, there isn’t much) is how the jigsaw pieces fit together. The receivers play where they play. Chase is the outside burner. Tee Higgins is the delightful second foil; a boundary receiver who wins with crisp routes and good hands and the nous for when and when not to settle down; CJ Uzomah is the matchup tight end, someone who is attached to the line of scrimmage to add some extra beef to the run-game when needed, and enough size and speed to zoom beyond linebackers or box out safeties over the middle of the field.

Then there’s Boyd: Often the afterthought hanging out in the slot. And so often in the final game of the year, it comes down to the player who’s typically third or fourth on a quarterback’s hit list as defenses look to take away the top options.

There’s nothing fancy about how Cincy pairs the four together. They line those guys up and just play. There is little movement. They don’t interchange roles or responsibilities. Rather than vacillating receivers between positions – as is custom in the modern game – the Bengals compress their formations. If they want to align Ja’Marr Chase in the slot, they don’t swap Chase and Boyd; they cut Chase’s alignment, shuffling him closer to the line of scrimmage and compressing the whole formation.

Chase is the splash-play creator, Boyd the underneath scavenger. Since week six (which allows you to remove some of the early season chicanery), the Bengals are third in the league in third-down EPA per play, a measure of a team’s down-to-down efficiency. Their go-to weapon: Boyd, a bobbing, weaving, stop-on-a-dime, chain-mover.

During the second half of the season, as defenses have looked to (finally) clamp down the supply line to Chase down the field, the Bengals have manipulated his route concepts. He attacks quicker; it’s about yards after the catch these days rather than bombing the ball over a corners head.

That’s had a knock-on consequence for the entire team. Modern offense is about having a vertical stretch and horizontal stretch paired within the same play. Chase once served as the go-to vertical option on and and all desgins. Now, the Bengals are a touch more creative in how they leverage the threat of Chase into easy buckets for everybody else. It’s diversified Boyd’s targets – and brought the underneath threat increasingly closer to the line of scrimmage; his average depth of target dropping as the season has run along. And yet And yet he’s nudging up towards six yards after the catch on average.

It's been a clear, simple adjustment: As defenses have honed in on Chase, the Bengals response has been to get the ball out – fast ­– to Boyd and let him go to work after the catch.

So far in the playoffs, it’s been a bust. Boyd has been neutered. The double-Chase, double-the-slot formula that has given Cincy issues throughout the season has returned to the fore. After hovering around the ten yards per reception mark for the bulk of the season, his production has dropped to below five yards per grab during the playoffs.

READ MORE of Ollie Connolly at The Read-Optional

Ah, but the Rams are not your traditional playoff defense. They bust more than any prospective champion has any right to. Run back through the Niners game, if you get time. You can count double-digit busts before you hit the fourth quarter. To do that while fielding a legitimately good group is damn near impossible.

One avenue the group has struggled with all season: How to match up with shifty slot receivers.

Boyd represents a tricky matchup for the Rams. Earlier in the season, the Rams looked to suppress the middle of the field by sliding Jalen Ramsey into the slot. He played as a pseudo-linebacker, playing a box-in-box-out style that has steadily become the norm as teams look to take away quick-hitting RPOs and to cut off the supply line to star receivers who’re creeping ever closer to the middle of the field and away from the perimeter.

An added benefit: throws outside the numbers are the trickiest in the game, and playing a turn-and-run, trail, eyes-on-the-quarterback style is the easiest (by a shade) for a group of iffy cornerbacks to rep. There are more options in the slot, tougher route paths to defend. The entire route chart is available, with a whole assortment of post-snap options and communication needed depending on the style of coverage – the Rams, unlike a host of the league’s defenses, do run some intricate coverages that require post-snap communication.

It's a style that put a bunch of pressure on Ramsey to play like a super-duper star.

It worked! Through the first six weeks of the season, the Rams’ defense ranked sixth in explosive pass rate. They gave up fewer than three explosive plays a game, despite a rotating morass of mediocrity lining up throughout the secondary. A big part of that: Blitzing.

Adding Von Miller changed the dynamic. Bringing in Miller was less about the Rams ability to generate a pass-rush as their pass-rush profile. In the playoffs – still – the best way to win is to pressure with four. It’s a cliché for a reason. Rushing with four allows a defense to, hey presto, keep seven back in coverage.

Ramsey proved to be a one-man wrecking crew, serving as the team’s best force defender, a run-game playmaker, and a master manipulator inside. Having that player sat in the middle of the field was a force multiplier while the Rams were sending heat to the backfield on over a third of quarterback dropbacks.

Adding Miller meant reducing the number of blitzes, which freed up resources for the Rams to move Ramsey back outside. 72 percent of Ramsey’s snaps prior to the Miller trade came inside, be it in the slot, lined up in the box as a linebacker, or attached to the line of scrimmage. Post-Miller trade, just 48 percent of Ramsey’s snaps came inside compared to 51 percent as a boundary corner. In the playoffs, that number has sunk even lower: Ramsey has averaged just eight snaps inside during the postseason, with only a couple (typically after a motion) coming from the slot.

Raheem Morris has a tough choice to make on Sunday. Does he allocate his top resource on the Bengals best receiver and hope for the best? Or does he try to take away the quick, easy, underneath stuff, Burrow’s safety blanket, with his top marksman, while choosing to defend Chase through sheer numbers rather than talent?

To move Ramsey back inside would be to break against the team’s post-Miller type. But it would also make sense. In the playoffs, the Rams have ramped up their blitz rate again – in the hopes to create one-on-ones for Aaron Donald inside – but have done so while keeping Ramsey outside. It’s been a whiff – they’ve pressured no more than usual and had consistent busts in the middle of the field.

There is no inherent right or wrong answer. It’s a tactical choice, and one that Morris can bounce between as the game unfolds. Sticking his heaviest hitter on the offenses heaviest hitter seems like the savvy, obvious move. But given the rest of the makeup of the game: That his defensive line is liable to swamp Cincy’s offensive line; that the Bengals will be gearing a gameplan around the run-game and getting the ball out of Burrow’s hand quickly; that in short-yardage, must-convert situations Burrow looks to Boyd. Given that, it would be smart to slide Ramsey from the perimeter back inside for a bulk of his snaps, both to double any quick, in-breaking guff from Chase, and to take on Boyd man-to-man in high leverage situations.

If the Bengals continue to slam their head against the wall with early down runs that have little-to-no shot (as is Zach Taylor’s want), then the third-down battle will mean everything. The Rams will get pressure; that’s what they do. Burrow et al. will need to get rid of the ball quickly. Much focus will be on Chase in the big spots, but Burrow’s go-to guy in such moments is Boyd.

Ollie Connolly is the author of The Read-Optional on Substack and covers Sports & Culture for The Guardian. He is also a former NFL/College Football Scout and Recruiting Analyst.