Pickwatch NFL Expert Roundtable: 2022 Divisional Weekend
Our roundtable is back for their thoughts on the 2022 NFL Divisional Playoff Weekend. 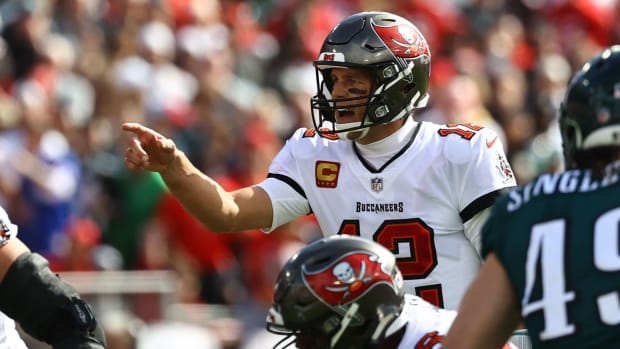 One of the best parts about Pickwatch is that it gives fans direct access to the very best experts around the web, and even allows them the ability to aggregate and analyze their opinions.

To that end, for the 2022 NFL Playoffs, we're bringing some of those best experts to you for a roundtable discussion. This week, we have some great guests:

What matchup are you most looking forward to this weekend?

John Breech: If you ask most people this question, I'm guessing roughly 35% of them would say Bills-Chiefs, 30% would say Packers-49ers, 25% would say Rams-Buccaneers and maybe 5% would say Bengals-Titans. Well, count me in that 5%. I think the Bengals and Titans are both underrated and I think they could give us the best game of the weekend. Although Bills-Chiefs is getting all the AFC hype, it's worth noting that the Bengals and Titans went a combined 3-0 this year against those two teams. Mike Vrabel has one of the best defensive minds in the NFL and it will be fascinating to see what he comes up with to stop the Bengals high-flying offense. It will also be interesting to see just how healthy Derrick Henry will look after not playing football for 11 weeks.

D’Andrea: They're all pretty great—even you, Bengals-Titans! I've got a critical eye on Rams-Buccaneers II thanks to the extremely interesting showdown between one veteran quarterback with one postseason victory on his resume and another with 34 more of those. Brady's gonna screen pass the Rams to death before unleashing hell downfield and LA is going to play the two-man game with Matthew Stafford and Cooper Kupp and I have high expectations.

The best game, however, will be the Bills-Chiefs showdown that pits the league's two hottest teams against each other following blowout wins to start the postseason. Patrick Mahomes vs. the league's top defense? Josh Allen, now flanked by a competent running game, against a Chiefs D that's been punching above its weight class for unsustainably long. There are going to be some fireworks there—just hopefully not the ones the Chiefs use to celebrate touchdowns, since they ran out of those.

Katzowitz: I'm not tied to the Bengals nearly as much as my buddy, John Breech, but I lived in Cincinnati for six years and covered dozens of Bengals games (and way more practices than I care to remember). The fact they're having success in the postseason is mindblowing to me (and absolutely surreal to the city, I'm sure). Cincinnati is talented enough to beat any team left in the postseason, but I'm salivating to see Derrick Henry back in action for Tennessee and to see how he performs. Kansas City vs. Buffalo will be a shootout, but I'm fascinated by Tennessee vs. Cincinnati.

Which Divisional Round QB do you trust the most? The least? And why?

John Breech: The answer for me is Tom Brady. I don't think the Buccaneers are going to win the Super Bowl and to be honest, I'm not even sure they're going to get out of the divisional round, but if I had to pick one QB out of this group to get me a win in a big game, it would definitely be the guy who's won seven Super Bowls.

The QB I trust the least is probably Ryan Tannehill and that's because I'm not sure the Titans fully trust him in the postseason. In his four playoff games with Tennessee, the Titans are 2-0 when he throws 15 passes or less and 0-2 when he throws more than 15 passes. In the two games where he hasn't been asked to carry the offense, the Titans won, but in the two games where he had to carry the offense, they lost.

Christian D’Andrea: Trust the most? Tom Brady, because (pulls up pro-football-reference page, gets overwhelmed, runs away)

Trust the least? That'll be Brady's former backup, Jimmy Garoppolo. Garoppolo's always been good for one baffling throw per quarter, but he wound up actively working against his 49ers late in their Wild Card win over the Cowboys. He rose up for big games in the regular season that made him look like a potential franchise quarterback again, just to remind us of his ceiling as a pro. Without the insane yards-after-catch capability of his wideouts and tight end, Garoppolo would essentially be Jared Goff.

Josh Katzowitz: I wouldn't trust Aaron Rodgers with much of anything, especially if we were talking about the effectiveness of the COVID vaccine, but I do have complete confidence that Rodgers will lead the Packers to victory on Saturday.  At 38 years old, he's still the best and most clutch QB in the league, and he hasn't thrown an interception in more than two months. I feel completely the opposite about Jimmy Garoppolo, who's thrown twice as many interceptions as he has touchdowns in his playoff career.

What did you learn in the Wildcard round that changed your mind about one of these games?

Breech: I think there were about 40 people at Pickwatch who went 6-0 with their wild-card picks and I was one of them, and although I'm saying that to brag, I'm also saying that as a way to note that I didn't really see anything that changed my mind about any one team. The one game that did surprise me was the Rams blowing out the Cardinals. I thought we might see Matthew "I've never won a playoff game" Stafford struggle, but he diced up the Cardinals for his first playoff win. Although I wasn't completely sold on the Rams as a Super Bowl contender before—and that's mainly due to Stafford—I am absolutely sold on them now.

D’Andrea: Well, the Rams did little to change my mind about Matthew Stafford hitting another gear because, let's face it, Arizona lost that game as much as Los Angeles won it. The Bengals got a very nice win but needed the Raiders to shoot themselves in the foot to do so. I still have doubts. The 49ers nearly found a way to lose to Mike McCarthy so ... yeesh. Needless to say, I'm not especially confident in any of those teams. I do have high hopes for the Bills after their ritualistic dismemberment of the Patriots last Saturday. They've created an impossibly high standard to live up to, but still. They have the highest ceiling of anyone in the playoffs following that performance.

Katzowitz: OK, I was wrong—like, way wrong—about the Buccaneers losing to the Eagles in the Wildcard round. Here's what I wrote last week, "The Buccaneers are playing meh. It would not surprise me to see Philadelphia pull the upset. Besides, Tom Brady's playoff dominance can't last forever, right?" I was wrong on all accounts. Tom Brady is still awesome. The Buccaneers are still a Super Bowl contender. And I can still make horrendously incorrect predictions from time to time.