NFL Wildcard Weekend Notebook
Head of Content Michael Schottey cleans out his notebook after a weekend of NFL action and lots of NFL coaching and personnel news. 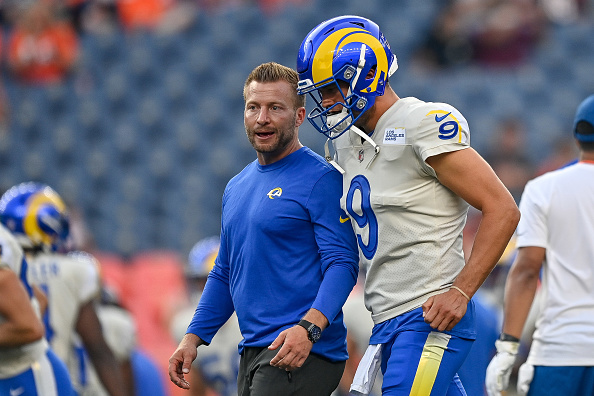 The Divisional Round is set, but let’s take a minute to look back at NFL Wildcard weekend to discuss the winners, the losers, the takeaways and dispel some hot takes from a great weekend of football.

85 percent of experts and users tracked by Pickwatch got this one correct, and for good reason. Although it had been more than 30 years since the Bengals won a playoff game, they were far and away the better team here. While I’ve noted all season long that the Bengals’ best feature is their quick-strike ability anywhere on the field, it was quarterback Joe Burrow’s patience and poise that won this one. The Raiders’ pass rush only hit Burrow five times and the Bengals didn’t turn the ball over.

My takeaway from this game, as I said on Three & Out, is that the modern NFL has passed by Patriots head coach Bill Belichick. I’m not calling him a bad coach by any means, nor am I saying that the Patriots should fire him. However, as the Patriots were at midfield, already down multiple touchdowns to a Bills offense they could not stop, Belichick continued to punt and play a game of field possession. How’d that work out for you, Bill? For decades, NFL coaches were taught to manage the game to mitigate risk. A new era of analytics has taught us how to manage game to maximize opportunity. Belichick needs to start stepping aside and either walk away or hand over major portions of game management to a coach who understands why the Bills mollywhopped them.

This game wasn’t even as close as the doubled-up final score indicates because all 15 Eagles points were scored in the fourth quarter in garbage time. How did things get so out of hand? The Buccaneers’ rushing defense was on point from the very start of the game and forced QB Jalen Hurts to beat them with his arm. That didn’t work out so well. The Eagles finished with only 95 yards rushing, and Hurts with two interceptions. The victory was pyrrhic, however, as Tampa Bay offensive tackle Tristan Wirfs and center Ryan Jensen went down with injuries and may not be available for the Divisional round.

The only upset of the week and the only game the majority of experts tracked got wrong (myself included). I felt good about the 49ers as a whole but picked QB Jimmy Garoppolo to have the set back and not the entire Cowboys offense. The upset almost didn’t happen, however, as the 49ers continually settled for Field Goals—which felt really good in the moment but started to look pretty dangerous as the Cowboys stormed back late. The Cowboys threw everything they could at wide receiver Deebo Samuel and he still finished with 110 total yards and a touchdown.

Another game that wasn’t nearly as close as the score indicates, but also a game that spent the first handful of drives feeling like it could go either way—especially after a fumble return for a touchdown by Steelers defensive end T.J. Watt that made it seem as if the Chiefs wouldn’t be able to stop the Steelers defensive front all night. By the end of that quarter, the Chiefs were up 21-7 and by the end of the third quarter, America had gone to bed.

I’ll speak more to this below as I clean out the notebook, but I’ve see way too many people react to this game with hot takes that make it seem as if the Cardinals only recourse is tear everything down, fire head coach Kliff Kingsbury, cut QB Kyler Murray and make some level of human sacrifice to atone for everything that went wrong here. Kingsbury is one of the younger NFL head coaches, and Murray was making his first playoff start. Meanwhile, the real story is that the Rams dominated the Cardinals in the trenches. It’s really hard to game plan when you’re getting killed at the point of attack.

The Schottey Six: Media People Who Could Run NFL Teams

With the Las Vegas Raiders firing Mike Mayock, formerly of NFL Network, I thought it would be fun to talk about a few other media types who could handle running an NFL team. More on Mayock, below…

1. Louis Riddick (ESPN) — The easiest name for this list, I’m frankly surprised Riddick doesn’t have a job in the NFL already and more surprised that his name hasn’t come up in as many interview lists this year. A former player and personnel director, Riddick’s ascent to the Monday Night Football booth should be seen more as a pitstop on his way to a front office and not as the final goal.

2. Daniel Jeremiah (NFL Network) — The second easy selection on this list, Jeremiah has bounced between front offices and the media a couple of times now and has deep ties around the league from his time with the Baltimore Ravens, Cleveland Browns and Philadelphia Eagles. He’s never run a personnel department, however, and that may be what keeps him from jumping right from TV to running a team.

3. Charles Davis (NFL Network) — OK, my first curveball. Davis has both NFL and college football chops and has been the face of both Senior Bowl and Combine coverage for a while now. He loves the minutiae of the evaluation portion of running a team, which makes him a good candidate. Here’s where the dots connect, though, before his broadcasting career took off, Davis worked in athletic administration, running tournaments and the U.S. Olympic training center before being hired as the Assistant A.D. at Stanford. From a straight leadership perspective, Davis could clearly handle the job.

4. Amy Trask (CBS) — Cheating here, because Trask served as the CEO of the then-Oakland Raiders from 1997 to 2013. She could easily lead any NFL team and many (including myself) think she’s the best viable name to be next NFL commissioner whenever Roger Goodell is done.

5. Mike Tannenbaum (ESPN) — Cheating again because Tannenbaum is a previous general manager of the New York Jets and Vice President of the Miami Dolphins. Did you know he’s only 52, though? Practically a baby by NFL leadership standards. He’s doing good work on ESPN and with The 33rd Team, so he’ll likely get another shot at some point—plus, it’s not like either of his previous organizations got better after they got rid of him.

6. Cris Collinsworth (NBC) — One last curveball, Collinsworth just seems like a guy that is going to get bored in the booth eventually. He’s the majority investor in Pro Football Focus, which keeps him at the forefront of a company that provides analytical support for every NFL team. He’s also one of the smartest people around the game and famously returned to school following his playing days to get his law degree.

— The Raiders getting rid of Mayock is a mistake as everything I’ve heard from both inside and outside the organization is that former Head Coach Jon Gruden had final say on each and every pick during his tenure, but often relied on Mayock heavily in the middle-to-late rounds of the draft. I’ve been told that both defensive end Maxx Crosby and cornerback Nate Hobbs were Mayock specials.

— We live in a world of “now” when it comes to NFL takes, but the reaction to the Cardinals loss really got to me. Ya’ll remember this team was undefeated at the end of October, right? That their first losses were only because QB Kyler Murray went down? That WR DeAndre Hopkins going down is the primary reason they struggled over the past month? There are a lot of reasons to bash the Cardinals, but let’s not tear down everything that’s been built.

— I’m a little less bullish, but have similar thoughts about the Dallas Cowboys. Yes, head coach Mike McCarthy does not know how to manage a game…still. At 58 years old, it’s a little too late to believe he’s going to change his stripes. With one or both coordinators likely headed elsewhere this offseason, it might be a good time to reshuffle this deck. Again, though, the Cowboys had a fantastic regular season and were good in all three phases of the game, so there is plenty of reason to believe they stand pat and cling to that (and not the embarrassing game management) being the prevailing trend.

— There’s some irony in McCarthy taking full public blame for the Cowboys’ lack of preparedness against the 49ers when, you know, both coordinators are on everyone’s wish list for job openings. Coordinators do more than just scheme. They’re coaches, too. If the Cowboys weren’t prepared, that’s just as much on offensive coordinator Kellen Moore and defensive coordinator Dan Quinn as anyone. Those are questions they should be answering in job interviews.

— Ridiculously excited to see Colts defensive coordinator Matt Eberflus be the first candidate to get a second interview with the Jacksonville Jaguars. The Colts were better than their personnel on both sides of the ball this season, and Eberflus has some deep ties with a vast array of coaches. Rather than tying the Jaguars to specific schemes, Eberflus would be a culture guy first and foremost and understand how to get the most out of the personnel on the roster.

— Also excited to see Los Angeles Rams defensive coordinator Raheem Morris get an interview with the Vikings, where I think he would be an awesome fit. Morris definitely failed (and spectacularly so) in Tampa Bay in his first go-around as a head coach, but was only 33 when he was named Head Coach there. He failed because, at that time, the Buccaneers organization was operating on bare bones accounting and his staff was both small and (mostly) inexperienced.

— The other big reason Morris failed is because he was younger than many of his players and, although he’s always been (and will continue to be) a players’ coach, he was far too familiar with his team—even partying and clubbing with them, which is ok for a position coach in many situations, but not for a head coach. Since then, he’s coached on both sides of the ball on very successful teams. He definitely deserves another shot.

— With Ben Roethlisberger looking more and more like he’s officially (finally) done in Pittsburgh, sign me up for seeing what offensive coordinator Matt Canada’s offense looks like with a viable quarterback…including one with a little mobility.

— Color me absolutely wrong about the New York Giants (at least at this stage of the game), the Mara family has seemed to learn from some of their previous mistakes and has cast a wide net of some really great personnel evaluators for the G.M. position. It looks like they might finally get the rebuild they should’ve started in like 2010.

“Even though we face the difficulties of today and tomorrow, I still have a dream.” —Martin Luther King Jr.