NFL Week 18 Notebook: Wild Week Sets Playoff Field, Black Monday
Week 18 set the stage for some teams to head to the playoffs and other teams to start rebuilding. 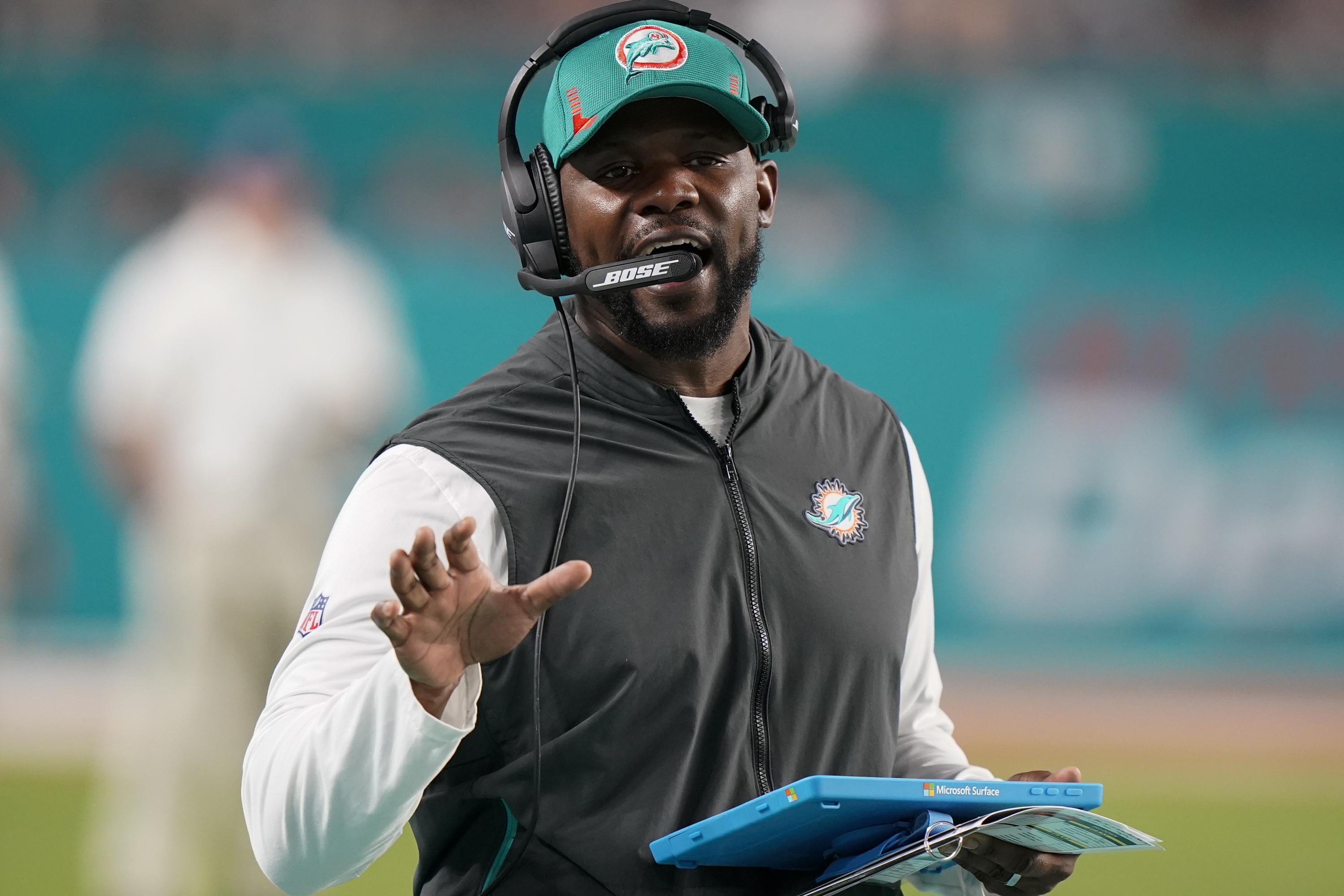 A bit of a truncated Notebook this week, mostly because Week 18 was a bit of a crapshoot and a lot of the games were essentially meaningless. We’re going to focus on the games that did matter and helped set the playoff field up here and then hit some Black Monday notes below. (I have takes…)

Obviously, the biggest game of the day was Sunday Night Football’s matchup between the Las Vegas Raiders and the Los Angeles Chargers. Only 27 percent of experts tracked by Pickwatch thought the Raiders were going to pull it out, and events earlier in the day had 100 percent of experts I tracked on Twitter rooting for the intentional tie.

Huge implications from this game both for the playoff field but also for the future of the Raiders. They make the playoffs (along with the Pittsburgh Steelers) because of this win. Interim Head Coach Rich Bisaccia has clearly done enough to keep the job, but will he? The Chargers were eliminated from the field seemingly entirely because of Head Coach Brandon Staley’s inability to read the room and allow the tie to happen.

Of course, much of this insanity was set up by an inexplicable game in Jacksonville in which the Indianapolis Colts lost to the Jaguars—something they are really good at, as remembered by 5 percent of the experts tracked by Pickwatch. Philadelphia, also in the playoffs, now look like evil geniuses for unloading quarterback Carson Wentz to the Colts. He had a QBR of 4.4 against the Jaguars which is…uh, not good.

The Pittsburgh Steelers didn’t so much beat the Baltimore Ravens but perform a mercy killing to what has been as disastrous a season as possible for that team. It’s reminiscent of the San Francisco 49ers a season ago and how so many predicted a bounceback. The Ravens are going to be fine long term, and honestly could’ve won a playoff game (or two) if they’d been healthy at the right time. The Steelers? A lot of people are going to predict a blowout in this week’s game against the Kansas City Chiefs, but the Steelers are playing over their skis right now. I don’t think they’ll win either, but don’t be surprised if they keep it close.

The NFC West had itself a weird day as well. The Los Angeles Rams continue to play feast-and-famine ball. Neither Rams QB Matthew Stafford or Niners QB Jimmy Garoppolo had a fantastic day, but the 49ers had a better gameplan in this one and were able to contain the Rams’ run game and limit them to 2.4 yards per carry as a team.

The Arizona Cardinals also botched their Week 18 game and any hope of winning the division. This sets up a playoff matchup between the Rams and the Cardinals. That should be a fantastic game. The 49ers, meanwhile, get the Dallas Cowboys.

1. Can the Tampa Bay Buccaneers turn it back on? — Last season, the Buccaneers didn’t look like the Super Bowl favorites, until they did. They’re getting some help back on defense and Tom Brady loves playoff football.

2. Ben Roethlisberger Curtain Call? — The Steelers shouldn’t even be here. How much pluck does this team have left?

3. Derrick Henry Running Wild — The Titans getting King Henry back for the playoffs doesn’t even seem fair at this stage, but here we are, and I am here for it.

4. Young QBs on the Big Stage — How do Kyler Murray, Jalen Hurts, Mac Jones and Joe Burrow respond to the next steps in their own personal evolutions?

5. Which Cowboys Offense do we get? — Do we get the No. 1 scoring offense or the gang that can’t shoot straight? They’ve been both at various times this season and now the pressure is on.

6. And…Which Packers Defense? — The Packers are back on top, in large part, thanks to this young defense, but they’ve had some clunkers in the past few months.

— Shock of the week for a lot of people was the Miami Dolphins firing Head Coach Brian Flores. There were rumors of a rift in the organization, but the job Flores did in pulling the Dolphins out of their 2021 tail spin earned him more time. He’s now one of the top candidates for every other open job.

— If you’re not seeing at least some racial implication in Flores getting a shorter leash after better seasons than a lot of other head coaches, you’re not looking hard enough. Vance Joseph, Steve Wilks and Jim Caldwell all got less time than their counterparts, now Flores. In a vacuum, you can defend each move. Together, why do we only have two black head coaches in the NFL and why are they seemingly held to a higher standard?

— Another shock was the dismissal of Minnesota Vikings general manager Rick Spielman after 15 years with the organization. He was VP of Player Personnel when I covered the Vikings for (literally) the smallest AM radio station in the U.S. I thought he was brilliant and headed for stardom back then. He’s easily a Top 10 (if not Top 5) general manager in the NFL and the organization was reportedly looking at elevating him before going the other direction. He’ll land on his feet…probably in Detroit where his brother, Chris, is helping run things and where Rick started his career.

— Along with Spielman, Vikings Head Coach Mike Zimmer was let go. The Vikings were a bottom-10 scoring defense and the offense wasn’t good enough to make up for it. As opposed to Vic Fangio in Denver who had an overachieving defensive unit, Zimmer didn’t have a leg to stand on any more. Both Fangio and Zimmer are great coaches who will have coordinator job offers if they want them. Both teams are better off moving in a new direction.

— The direction in Denver may not be too stark in contrast. They are rumored to be going after Dallas Cowboys defensive coordinator Dan Quinn who is roughly the same candidate as Fangio was when he was hired—defensive coordinator who is ridiculously well respected, revered by his players and assistants and is known as being great for team culture. If Quinn gets the job, the defense will continue to be Top 5 for years to come. That puts Denver where it’s always been, a quarterback away from true relevance.

— Another big shock was the New York Giants keeping Head Coach Joe Judge. The guy was a mess this season and things only seemed to spiral and get worse. The Mara family has a ton of respect from most in the media, but one can’t help but wonder how much of that respect is misplaced. They’ve been a wreck of an organization for a while now and rot starts at the head.

— Carolina Panther Head Coach Matt Rhule also keeps his job, apparently to “hire a fantastic offensive coordinator” after he just fired the biggest name at that position in the last five years or so. I got to see Rhule up close when he coached at the Senior Bowl last season. I thought he ran good, upbeat practices and has a quality staff. That hasn’t translated to wins, however, and he looks out of his depth running an NFL team.

— The Chicago Bears are also in the market for a general manager and head coach tandem. They are seemingly casting a wide net for the general manager position and talking to absolutely everyone they can. This mirrors what the Detroit Lions did last year, and that was a positive for the organization. They’re also asking Bill Polian to help with the search, which…is less of a great move.

— Old football-family organizations like Chicago run a lot differently than organizations owned by those who made their money in other pursuits. A guy like Carolina Panthers owner David Tepper has the disposable income to run his team like a Fortune 500 company, bring in consultants, add analysts, etc etc. The Bears don’t. They need a person with good management skills who has done this before to make up for some of the day-to-day operations they lack.

— As noted above, Bisaccia has done enough to keep the job in Las Vegas, but I wonder if Mark Davis can avoid the pressure and temptation to look at a “shiny new” coach. Bisaccia has had the “Assistant Head Coach” title at his various tops since 2000. He’s paid his dues and done a good job with this team.

— I’m filing on the road from Fort Worth, Texas this week. I spent the last year helping as a scouting assistant for the College Gridiron Showcase and am helping coach the offensive line this week. It’s a great event and there are lots of great players here who will contribute in the NFL next season.

— My favorite CGS story, though? Coastal Carolina center Sam Thompson—the undersized, former walk on who became one of the best linemen in college football—is playing fullback here. He looks great doing it, too. The offensive linemen are rooting for him about as loudly as possible.

“Human kindness has never weakened the stamina or softened the fiber of a free people.” —Franklin D. Roosevelt