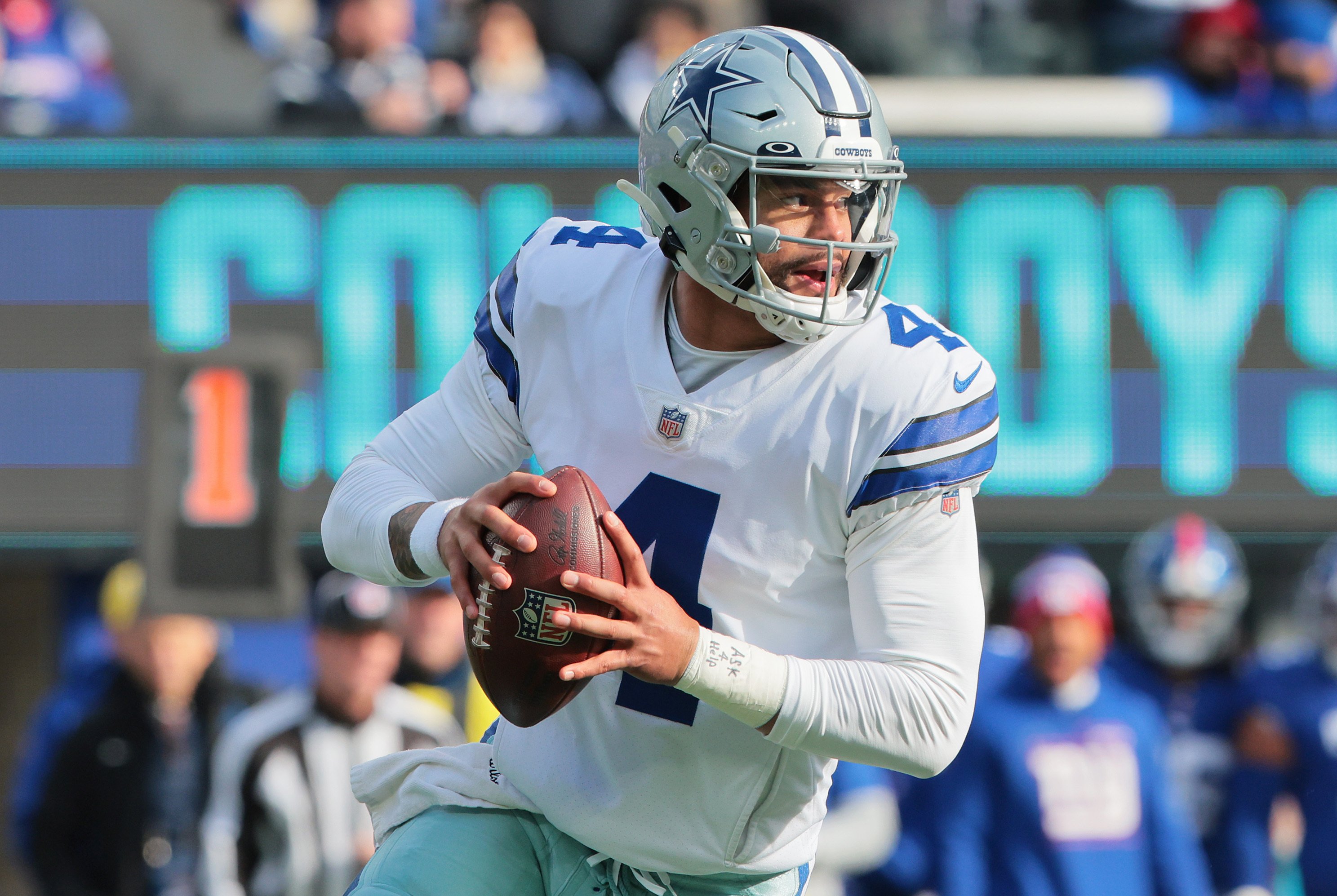 If you have seen any NFL games recently, you know the Erin Andrews-Infiniti commercial which is both overplayed and eminently quotable. “She rich rich,” trends on Twitter at least a couple of times every Sunday. In that spirit, I’ll start this column by noting that we’ve all known the Dallas Cowboys were back, but “Oh, they back back.”

The Cowboys beat the ever-living snot out of Washington Football Team and I really should check with Shaun to see if there’s any harsher language I can use in this column without getting fired. They scored 21 points in both the first and second quarter of a primetime game that, frankly, if you watched the second half of, you deserve a medal.

That 56 points mark was a high-water mark for scoring in the NFL this season and the first time the Cowboys have hit that mark since a 1966—a game in which Don Meredith threw five touchdown passes. That season, the team lost in the NFL Championship Game to the Green Bay Packers who would go on to win Super Bowl I.

Quarterback Dak Prescott didn’t quite get to Meredith’s five touchdown mark, but he did become the first quarterback in NFL history to complete touchdown passes to a wide receiver, running back, tight end and offensive lineman (Terence Steele) in the same game.

So, yeah, we knew the Cowboys were back, but now we’re talking about a team doing things that entire eras of Cowboys teams haven’t done and we’re referring back to Meredith and Tom Landry just to contextualize the events on the field.

Oh, and the Cowboys have clinched the NFC East and currently hold the No. 2 seed in the conference.

Yeah, they back back.

What 32 percent of the people Pickwatch tracked this past weekend remembered about the Tennessee Titans is that they tend to show up in big games that just about everyone counts them out of. OK, maybe not every time (New England Patriots a few weeks ago, Arizona Cardinals in Week 1) but they looked every bit the contender against the San Francisco 49ers, downing them 20-17. We probably should’ve seen the Niners faltering eventually and we probably should’ve seen the Titans being the ones to knock them off.

We also probably should’ve seen the Seattle Seahawks’ 2021 season mercifully being put to bed by “Big Dick Nick” Foles and the Chicago Bears. Only eight percent actually picked the Bears, but the Seahawks have laid down for games like this all season long and Foles is the kind of QB who can right even the rockiest of ships.

No one picked the Houston Texans to beat the Los Angeles Chargers and certainly no one could’ve imagined it going so lopsided. QB Justin Herbert had a rocky patch in the middle of the season and admitted to being confused about what he was seeing on the field. Houston must have studied those tapes closely, because they turned what was looking like a world-beating Chargers team into a team suddenly searching for a fresh set of answers.

1. Davante Adams (WR Packers) — There’s a lot in the air with what the Packers do this season, but if Adams hits the open market, he’ll have suitors lined up.

2. Orlando Brown Jr. (OT Chiefs) — The Chiefs OL has hit its stride after a major reshuffle in 2021 and may need to do so again. Brown may end up the highest paid OL in the NFL after this season.

3. J.C. Jackson (CB Patriots) — Easily a Top 5 young cover corner, Jackson is set to hit (and break) the market. The Patriots have a long history of letting guys like this walk.

4. Randy Gregory (DE Cowboys) — At 29, Gregory finally has his head on right and is playing out of his mind. He’s due for one last big payday and he’s going to want to make it count.

5. Leonard Fournette (RB Buccaneers) — The Buccaneers famously got everyone back from their Super Bowl run, but “Playoff Lenny,” will be a hot commodity for teams looking to energize their run game in 2022.

6. Brandon Scherff (OG WFT) — Now 30, Scherff has played his entire career in Washington and has played on the franchise tag the last two seasons…meaning, he’s gotten paid but probably wants a chance to win some playoff games.

— When I woke up Sunday morning and saw Adam Schefter’s report that the Giants were going to continue this year’s status quo with Head Coach Joe Judge and QB Daniel Jones, it made sense. I did feel a little grinchy, however, because anyone who has watched the Giants this season understands how much needs to change. This team is not well-equipped to go to battle from a personnel perspective and they’re not overplaying their talent level, either.

— The one Giants figurehead who might be on the way out is general manager Dave Gettleman. Here’s the thing, though: Any potential new general manager is already being told that he isn’t going to have his choice of QB or coach. Because of that, top candidates aren’t going to want this job. Moreover, the Giants are not wired to cut everything down and start from scratch. Expect ownership to look hard at current Assistant GM Kevin Abrams or former Giants Director of College Scouting, Marc Ross, currently with the XFL. More half measures are likely to mean more mediocrity.

— More and more lists are starting to come out with names of coaches teams are expected to look at. I’m not seeing Indianapolis Colts’ defensive coordinator Matt Eberflus nearly as much as I’d like. He’s coached with some fantastic defensive minds over the years (Dean Pees, Rob Ryan, Eric Mangini, Monte Kiffin, et al.) and he’s been instrumental in the Colts defensive toughness and overall culture this season.

— Speaking of that toughness and culture, if you’d asked a month ago if the Colts would beat the Cardinals, I probably would’ve scoffed lightly. To straight up outclass them? That would’ve made no sense. The Colts are now a 5th seed and could easily win out.

— The Cardinals are suddenly a 5th seed and are losers of three straight with a game against the Dallas Cowboys coming up. Am I worried about them? Yeah, for 2021, they’re not the juggernaut they once looked like. Longterm? Nah…they’re overly reliant on wide receiver DeAndre Hopkins in their offense and A.J. Green hasn’t quite panned out in his absence, but those are offseason tweaks for an otherwise great team on the rise.

— Who is the best team in the AFC North? I have no idea! Right now, it’s almost certainly the Cincinnati Bengals, but every time they’ve looked like the best team, they’ve dropped some inexplicable games.

— That said, I’m not really worried longterm about any of the other AFC North teams either. The Cleveland Browns are a talented young team that needs to get their QB actually healthy. The Baltimore Ravens have almost an entire starting caliber defense on their IR. The Pittsburgh Steelers are never bad for long.

— The Los Angeles Rams/Minnesota Vikings contest was a perfect microcosm of the state of both teams. Rams QB Matthew Stafford had a terrible day, but the rest of the team was talented enough to step up. Meanwhile, Vikings QB Kirk Cousins had an average day—mostly due to Rams CB Jalen Ramsey shutting down Vikings WR Justin Jefferson—and the rest of the Vikings (sans RB Dalvin Cook) were not good enough to step up.

— The battle for the first overall pick is pretty much over with both the Detroit Lions and Jacksonville Jaguars looking likely to lose out. The Jaguars have the No. 1 spot and the Lions are at No. 2 with Houston and the two New York franchises jockeying for No. 3.

— If you haven’t yet, take a moment to subscribe to my show, Three & Out, which is available on iTunes or wherever you get your podcasts!

— With Christmas in the rearview mirror, I hope all of you are having a fantastic holiday season as we head toward 2022. I’ve been so blessed this year, and I hope the audience here at Pickwatch loves all the changes we’ve been making around these parts.