NFL Week 14 Notebook: Are the Ravens Playoff Chances Nevermore?
Can the Baltimore Ravens survive their slump? Take a look at that and more in Mike Schottey's Week 14 Notebook! 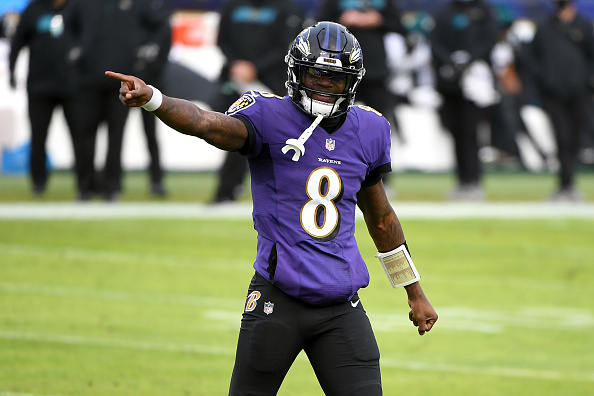 Losing a divisional game in December isn’t the end of the world, but when the Baltimore Ravens dropped their second-straight and are now only a slim margin ahead of *checks notes* the entire rest of the AFC North division, things are looking at least a little dire.

Before getting into how the Ravens have stumbled as of late, here’s what they have on the horizon: According to Football Outsiders, they have one of the 10 toughest schedules in terms of games left on the schedule. In addition to two more divisional games against teams they’ve already lost to (Pittsburgh Steelers and Cincinnati Bengals), the Ravens have two of the top teams in the NFC in the Green Bay Packers and Los Angeles Rams.

What I’m trying to say is that the Ravens losing out wouldn’t be entirely unheard of. That would finish them at 8-9, which would be one of the most disappointing seasons in franchise history—especially after such a dominant start.

More likely is that the Ravens split those games in some fashion, but with the Bengals and Cleveland Browns both breathing down their neck, it’s clear that any stumble could mean a huge drop in playoff seeding.

How did the Ravens get here? A big piece of that confusing puzzle is the on-field exploits of quarterback Lamar Jackson. Jackson is 26th in the league according to Pro Football Focus thanks to a near-league leading 13 interceptions, a pedestrian 6.9 adjusted yards per pass attempt and 38 sacks taken.

I wouldn’t lay all of that blame on Jackson’s shoulders, however, as offensive coordinator Greg Roman has been through this before. It’s tongue-in-cheek, but I’ve often compared his offense to a Denny’s menu. It’s a limited amount of components mixed together in a few different ways—many of which don’t make a whole lot of sense. It’ll do in a pinch, and some of it looks alright, but it’s really never the best idea.

Over the years, Roman has been brought in to mentor mobile quarterbacks like Colin Kaepernick, Tyrod Taylor, E.J. Manuel, Jackson and others. It’s always started OK, but rarely ends well. We appear to be in the death throes of his time in Baltimore.

If the Ravens are going to make the playoffs and make an impact once they’re there, it’s time for Jackson to step back up in a big way, and he’ll need lots of help from his supporting cast to do it. The Ravens have been a huge disappointment defensively, and Jackson has proven he can’t shoulder that load.

We’re cutting out the “never could’ve seen it coming” section of the column today, as it was a pretty chalky NFL week with a whole bunch of blowouts. Two games fit into the “should’ve gotten it right” section, however—both were ones that I personally got right, so I’m really couching this section in “I told you so,” and “you should read my picks column.”

With 45 percent of people picking the Atlanta Falcons to beat the Carolina Panthers, it’s clear that the majority of users and experts tracked by Pickwatch missed one or both of two pretty important things. First, the Falcons’ Cordarrelle Patterson is back. The dual-threat running back/wide receiver is more impactful than just his box score stats. He changes how a defense lines up and thinks every single time. The other big thing ya’ll missed was the Panthers’ complete lack of will in recent weeks and the firing of offensive coordinator Joe Brady. The Falcons are a bad team. The Panthers are (and played like) a bad team that doesn’t have any direction.

I really like what the Bengals are doing, but I was a little shocked that so many picked them to beat a good San Francisco 49ers squad. I’m calling some recency bias in this one, because the Niners deserve more than 41 percent of users and experts tracked believing in them. The Niners are getting healthy again and are a more formidable opponent than lots of our experts believe. More on that below...

1. 49ers A Top Offense — Ranked fourth in offensive DVOA, the Niners don’t have a ton of gaudy stats, they just move the ball in chunks (5.9 yards per play, tied for fifth in the league)

2. Trevon Diggs The Ballhawk — Diggs still has to work on his overall game, but his improvement from three interceptions to nine (so far) has been a huge piece of the Cowboys success.

3. Patriots are Back? — I felt a little alone in the wilderness predicting the Patriots would climb back atop the NFC East mountain this season, and even I didn’t think they’d be flirting with the No. 1 seed in the AFC.

4. Chiefs Go Turnover Crazy — If there is one thing standing between the resurgent Chiefs and another Super Bowl appearance, it’s turnovers. They’re tied for third worst in the league with 23 giveaways.

5. Washington’s Terrible Defense — I predicted the Football Team defense would be improved this year...by a wide margin. Instead, they’ve fallen flat on their faces and it’s the offense that’s carried the team.

6. Micah Parsons DPOY? — One of the top college players in the country and an absolute freak of an athlete, Parsons fell to No. 12 (and was even then called a reach by some) because he played off-the-ball linebacker. Now, he’s one of the NFL’s best pass-rushers and might be defensive player (not rookie, player) of the year.

— I would never have hired Urban Meyer. In fact, I told acquaintances around the Jacksonville Jaguars organization that they would regret the hire when it was made. A few months later, and I can honestly say that things are worse than I would’ve expected. He’s not an NFL coach and he does not wield anything remotely resembling respect from the players in that locker room.

— The Tennessee Titans don’t get any brownie points this week for beating the Jaguars this week just like I refused to give the Rams any for doing so earlier. That said, you can springboard off of a win like this by doubling down on what worked. For the Titans, that’s a lot of defensive pressure and flying around to just get a hand on the ball. Good things can happen when you give yourself an opportunity.

— I talked earlier about the Chiefs’ turnovers. Their lack of those turnovers was a huge piece of their thrashing of the Las Vegas Raiders. Yet, the Raiders have been at the bottom of the league in takeaways this season, so whether or not that trend continues remains to be seen.

— One of the best teams at takeaways has been the Dallas Cowboys, and their opportunistic defense took advantage of a Washington Football Team that puts the ball into the other team’s hands far too often. I jumped on The Team AM 980 in Washington, D.C. to talk about this game and I’ll repeat what I said here. If Washington can find a way to take shots without turning the ball over, they’ll beat Dallas in their next go-round and they could even steal a playoff win.

— I’ve been more bullish on New Orleans Saints “QB” Taysom Hill the last few weeks, not in terms of him being a franchise QB, but in terms of enjoying watching him play. With RB Alvin Kamara back, there are things Hill does to a defense that opens things up for the rushing attack (and big passing opportunities) that a traditional QB doesn’t give you. It’s similar to how Jalen Hurts helps the rushing attack in Philadelphia just by his presence on the field as the defense needs to account for him.

— The Detroit Lions barely suited up a football team on Sunday and then lost two of their best defenders, linebacker Alex Anzalone and cornerback Jerry Jacobs in the first drive. Jacobs is done for the year and is a good example of someone who made the most out of a chance who may not have ever seen the field in a “normal” circumstance. Playing for a bad Lions team riddled with defensive backfield injuries, Jacobs has been one of the more physical, tough defensive backs in the entire NFL. He’ll be considered a building block for this young team moving forward.

— I’ve said it before, but it bears repeating...the New York Giants need to tear it all down and start from scratch. On this week’s Three & Out, I called my shot. I don’t think the organization has the will for turnover, but if they do, it’ll be yet another half measure—someone like Marc Ross who was in the organization forever and has a lot of the same “Jerry Reese DNA” that the Mara family will want to lean back on.

— Officiating is at the worst it’s been in my time covering the league. You can’t run quality control for one of the largest organizations on the planet like this any longer. Referees should be full-time and expected to continually improve in their craft like coaches and players...not go teach middle school during the week and then decide what pass interference looks like on Sundays.

“The world is more malleable than you think, and it’s waiting for you to hammer it into shape.” –Bono