NFL Week 13 Notebook: Chargers Get Monkey off their Back
Head of Content Mike Schottey takes a look around the NFL in his Week 13 NFL Notebook 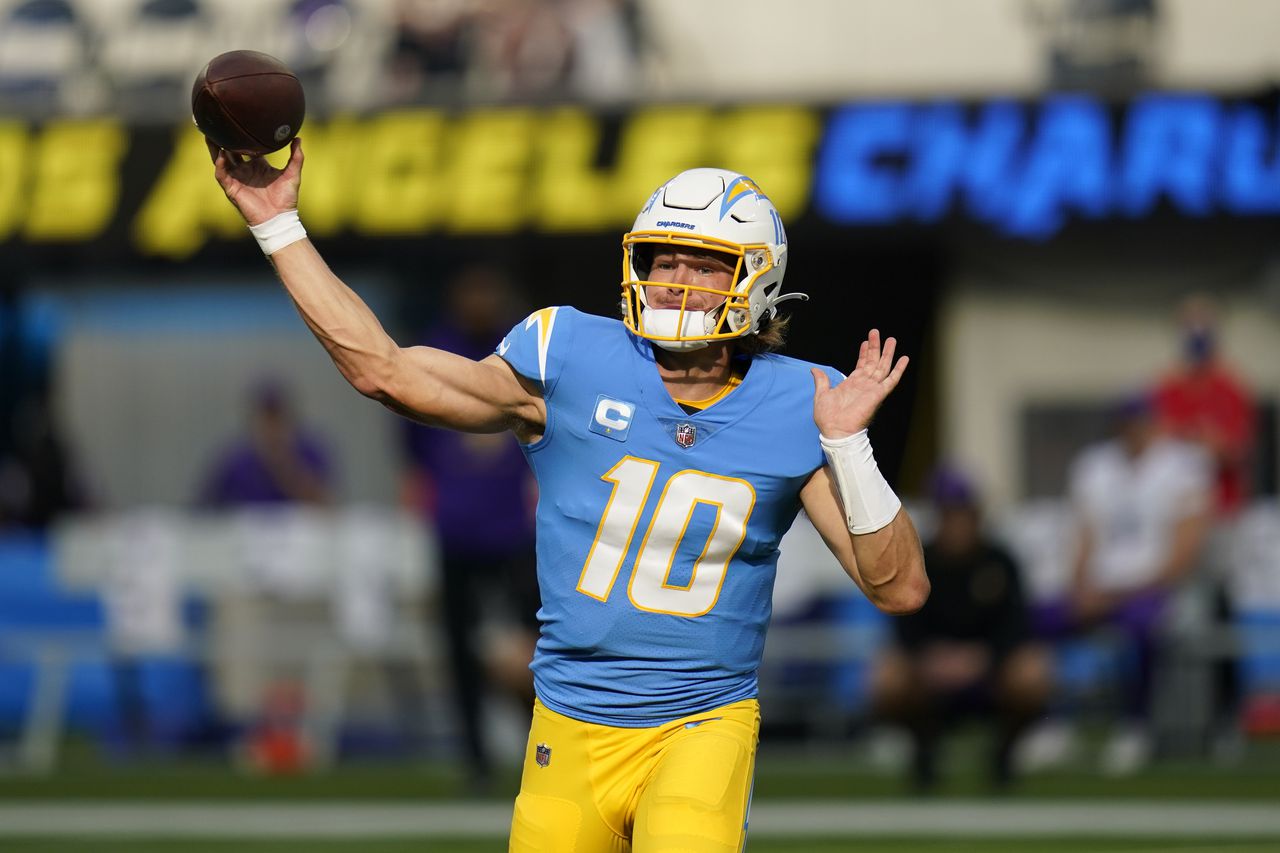 There are two things most NFL fans know about the Los Angeles Chargers. Heck, even if they’re still calling them the “San Diego Chargers” by accident, they know these two things: First, they know that the Chargers have a fatal flaw. The flaw might change from year to year, but something in the Chargers programming always demands they have a way to self-destruct. Second, everyone knows that, in addition to whatever fatal flaw, the Chargers are absolutely enamored with the idea of shooting themselves in the foot in the most spectacular of fashions.

Because of those two things, 75 percent of experts tracked by Pickwatch picked the Cincinnati Bengals. When I looked at this game, I saw a running back in Cincinnati’s Joe Mixon who could absolutely exploit the Chargers’ fatal flaw circa 2021—a pitiful rushing defense. Failing that, the Chargers would still find a way to lose this game, right?

The Chargers did their best in the second and third quarter to “Charger” their way out of this game. Yet, even throughout the worst of their backsliding, they did everything in their power to stop Mixon and the Bengals’ rushing attack. It worked. Mixon only rushed for 54 yards on 19 carries and Bengals quarterback Joe Burrow’s hand injury helped the Chargers come back with a 17th-point fourth quarter.

The Chargers are 7-5 and are better on paper than every team they face for the rest of the season, except for maybe the Kansas City Chiefs (who have some problems of their own, but more on that later…). Can the Chargers keep this up? Can they win out? Everything in the Chargers’ past says no, but this seems like a different Chargers team these days.

When push comes to shove, I know that Washington Football Team and the Las Vegas Raiders are roughly the same team both from a team makeup and a raging mediocrity standpoint. Yet, when 59 percent of people picked the Raiders to win this matchup, they must’ve forgotten that the Raiders drop games like this and Football Team has been winning these with regularity.

The same goes for the 91 percent of people who picked the Baltimore Ravens over the Pittsburgh Steelers. This was a game that set up like just about every AFC North matchup we all know and love. With the closest of margins and a two-point conversion attempt that was about two inches off of the fingertips of Mark Andrews, one of the most reliable receiving tight ends in the league, it could’ve gone either way. That’s the joy of matchups like these. All of us can be so sure, but when there’s so much history, games like this are almost always a coinflip.

Congrats if you were one of the 12 percent of people who picked the Seattle Seahawks to top the San Francisco 49ers. You likely had in mind what many of us forgot—Seahawks Head Coach Pete Carroll owns the 49ers. That said, this season has not set up that way. The 49ers are the far better team, and even without WR Deebo Samuel, this should’ve been a walk away win. Instead, the Seahawks showed more fight than they’ve shown since Week 1.

1. T.J. Watt (OLB Pittsburgh) — Easily the best player in the NFL this season. Not best defensive player. Not best pass rusher. Watt has been the best player. He should be MVP, but he won’t be, because that’s not how the voters vote.

2. Kirk Cousins (QB Minnesota) — Anyway you slice it, Cousins is having a career season and although the Vikings just lost to the Lions, they’re in the playoff hunt. There is a chance (maybe even a likely one) that Cousins goes on a tear. If he does and the Vikings win…?

3. Damien Harris (RB New England) — The Patriots are arguably the most complete team in football. If they end up on top at the end of the regular season, QB Mac Jones will be getting the love, but it’ll be Harris that’s the biggest factor.

4. Deebo Samuel (WR San Francisco) — If the 49ers can rebound from their recent loss and close out the season on top, Samuel will be the reason and he’s been one of the most fun players for voters to watch this season.

5. Trevon Diggs (CB Dallas) — The ball just finds him. Sometimes it goes over his head for a touchdown, but it ends up in his hands a whole lot.

6. Jevon Holland (S Miami) — The Dolphins’ defense has seen a huge late-season resurgence, and while he’s not the only player responsible, Holland is the biggest reason.

— The Arizona Cardinals are the best team in football, and the next step isn’t just that they win the big one (but, sure), it’s that people stop being surprised that they’re so good. QB Kyler Murray is going to win multiple MVP awards by the time he’s done and that defense is just going to get better. These guys are here to stay.

— It was good to see the Tampa Bay Buccaneers finish the game against the Atlanta Falcons with a little bit of tenacity. They’ve been a talented team this season, but they haven’t necessarily been a tough team. That looks to be changing.

— I don’t exactly thing a Jalen Hurts/Gardner Minshew QB battle is brewing, but some of the love that Hurts was getting needs to be redirected to the offensive line and offensive scheme.

— Listen, Taysom Hill was pretty terrible when he was needed to be a passer for the New Orleans Saints against the Cowboys. Yet, there were some moments where you started to see what the Saints see in him. He was electric as a runner. It’s not “future starting QB” levels of promise, but, I mean...it was something?

— Coaches have been fired for far less than what Mike Zimmer has done this season. I know I just talked about earlier how they could go on a run and make Cousins a MVP candidate, but they shouldn’t be talking in abstract about that. Zimmer has consistently run terrible end-of-game situations and his loss against the Lions while leaning on the prevent defense was the sort of mistake coaches stopped making in the 90s.

— Meanwhile, it’s easy to see why the Lions are making every effort with Dan Campbell. Campbell, too, has made innumerable mistakes in his first season coaching. His age (45) is why he’ll get some more chances to learn from his mistakes. The team loves him though. The owner loves him. His energy is weird and quirky, but infectious. I don’t know if he’s the right coach to lead a Lions team to the playoffs, but he’s definitely getting more from a talent-less roster than many would.

— I’m a little sad we didn’t see QB Daniel Jones at the helm for the New York Giants against the Dolphins. In the end, while the Dolphins’ winning ways continue, I’m a little disappointed the win wasn’t more of a statement—especially with the backup QB in.

— I’m really waiting to see QB Carson Wentz win a game against a top contender. Eventually, you need to trust your QB to win a game if you want to be an effective playoff team.

— There’s got to be more to the story with the Carolina Panthers and Joe Brady than is currently known. Firing him on the bye week and apparently unable to get ahold of him to do so in a timely fashion is just a weird look that screams the fissure between he and Matt Rhule was already pretty deep.

— Listen, as a journalist, I’m trained to remain objective. Lots of people think that means reporters can’t have any biases, but that’s not true (or realistic). In the end, the best anyone can do is admit to their biases, don’t let them control us and minimize their effect on our analysis. To that end, I have no problem saying that—as a born and bred Michigan and Detroit Lions fan, I have rarely had a weekend like the one we just had. This must be what normal fanbases feel like.

— Pickwatch isn’t a site geared toward the NFL Draft, but a big piece of my formative years were spent in that world. As such, I’m excited to be headed back to the College Gridiron Showcase in about a month. Last year, I covered the event as a member of the media and have been helping them put together this year’s scouting list. I’ll be back to help the event and maybe even do some coaching with some future NFL offensive linemen.

“There is an eloquence in true enthusiasm that is not to be doubted.”—Washington Irving