NFL Week 11 Notebook: How are the Patriots in the AFC East Lead?
Head of Content Michael Schottey empties his notebook after an exciting NFL Week 11. 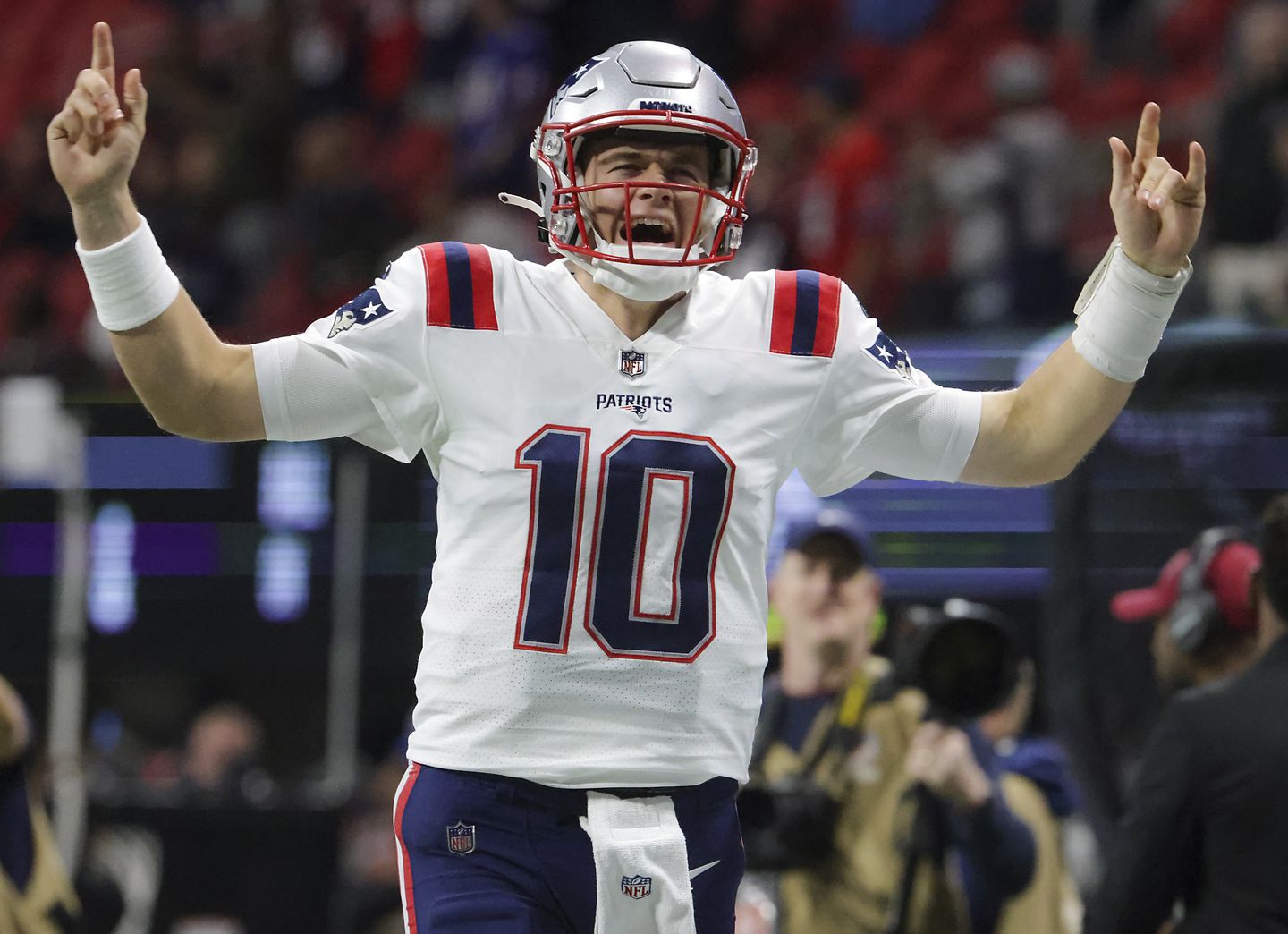 What’s the phrase, “shocked but not surprised”?

With the New England Patriots 25-0 drubbing of the Atlanta Falcons, any number of storylines are in play. On the surface, though, it’s important to remember the Falcons are both terrible and were in a rough spot in this game. No Calvin Ridley at wideout and no Cordarrelle Patterson at—um, literally wherever he wants—meant that the Patriots needed only to game plan for tight end Kyle Pitts. And, they did. Pitts was held to three catches on five targets and only 29 yards.

In a vacuum, if one wants to end there, that is enough. Winning 25-0 is always impressive in the NFL, but 96 percent of experts tracked picked the Patriots to win this game for a reason. Yet, now sitting at 7-4 and atop the AFC East, there are certainly more talking points to dissect.

First and foremost, there’s the fact that quarterback Mac Jones has been lightyears better than advertised. He’s completing 70 percent of his passes to a receiving corps that is (generously) not very good. He’s also getting the ball out of his hands quickly and largely avoiding contact. He’s not leading the league in any of the relevant passing stats, but he’s fourth in Pro Football Focus’s player grades. He’s been efficient if not flashy, and (especially as the season has gone on) avoided the big mistakes.

There’s also the angle that, simply, the Patriots are benefitting from a AFC East which is clearly “down” this season. The Buffalo Bills (and especially Josh Allen) have taken a step back. The Miami Dolphins have disappointed. The New York Jets are a mess. The Patriots aren’t worlds better than many expected, but there’s something to be said for the rest of the division being a tick or two worse.

Finally, it’s worth noting that this iteration of the Patriots is pretty similar...maybe even eerily so...to the iteration of the Patriots that won the Super Bowl with a young Tom Brady under center. Brady, early in his career, wasn’t putting up huge numbers either. He was buoyed by a fantastic offensive line, an over-performing defense and an offense that prioritized getting the ball out of his hands early and often.

What does this mean for the Patriots in terms of playoff success? Time will tell, but it’s got to be difficult for the rest of the NFL not to worry that Bill Belichick’s second dynasty might be upon us.

I’ve been hyping the Indianapolis Colts all season as a team that is playing better than their record. Sadly, I was not one of the 4 percent of experts who picked them over the Bills. How did it happen? While many will focus on running back Jonathan Taylor (and for good reason), he wasn’t the only reason for the dominance. The Bills were, clearly and truly, dominated from the jump by a team that was more physical. For the first time in years, the Bills looked weaker because of the cold weather that usually gives them an advantage at home. Colts QB Carson Wentz didn’t have a stellar day, but he outplayed Bills QB Josh Allen. The Colts defense looked intense and intimidating...the way the Bills No. 1 defense was supposed to look. Yet, we’ve seen the Bills struggle against physical teams before. They’re a good team, but they don’t want this kind of action.

I also truly regret not taking Washington Football Team over the Carolina Panthers. Only 20 percent did. I got caught up in the Cam Newton hype. To be fair (fair to me...this is my column after all), he played well enough for the hype to continue, but Taylor Heinicke has done more than enough to warrant all of that hype and more. I don’t know what hardware we can get him at the end of the season, but he deserves something.

If you called the Houston Texans over the Tennessee Titans, you weren’t just agreeing with the 1 percent of experts who thought that might happen, you were disagreeing with the lots of people who have been thumping the Titans as the best team in the league. The Texans’ defense mollywhopped their divisional opponents, however, and the Titans looked vulnerable in a way they had not looked for well over a month.

The Schottey Six: What Top Teams are Thankful For

2. Tennessee Titans — The Julio Jones trade was considered a luxury at one point. Now, It might save their season post-Derrick Henry.

4. Baltimore Ravens — Whatever scout pounded the table for Tyler Huntley.

5. Dallas Cowboys — Not needing to play the Chiefs again.

6. Los Angeles Rams — A bye week to get things figured out before the Packers.

— Before the rest of the football stuff, I want to take a moment and acknowledge the horrible tragedy at the Christmas Parade in Waukesha, WI. My wife and much of my extended family is from the area, and I’ve been on that very road many times. There is simply no need for tragedies like this to happen, and my thoughts are with those who lost someone as well as those survivors who will be forever scarred by the events.

— The Dallas Cowboys offense was poorly outmatched against the Kansas City Chiefs. Some of that was personnel (especially on the offensive line) but a big piece of that was the result of coaching—namely, a very experienced Steve Spagnuolo leading the Chiefs’ defense against a young...talented, but young...Kellen Moore. Many have tried to send the 33-year-old Moore to a head coaching job sooner rather than later, but Spags made it pretty clear the old dog still has a few new tricks.

— What I missed (big time) as the Philadelphia Eagles and New Orleans Saints faced off was the potential of the Eagles running right down the Saints’ collective throat. ESPN’s Field Yates pointed out on Twitter that the Saints defense has crushed it against the run over the last few years—except when it comes to the Eagles.

— I’ve been a proponent of the Detroit Lions coaching staff (even with all the losses), but the offense has been truly stagnant...especially since Dan Campbell took over the playcalling. As Sharp Football’s Ryan McCrystal pointed out, the Lions are only passing past the first down sticks 17.2 percent of the time. That number is insanely low and has led to the Lions being completely inept on third downs. When Jared Goff was with Sean McVay, that number was 36 percent.

— If I’m the Cleveland Browns, I’m pulling Baker Mayfield aside and gently telling him that his wife’s social media antics need to stop. The team is barely clinging to .500 and just got over Odell Beckham Jr.’s dad’s nonsense. The truth is, the whole team is playing poorly and Mayfield, while tough...no doubt, has been playing poorly as well. Wives of pots calling kettles black isn’t helping the locker room.

— As Ty Schalter pointed out on this week’s episode of Three & Out, the Dolphins have won three straight and are favorites in their next three games—against the Panthers, Giants and Jets. It’s hard to call the season “saved,” at 4-7 but there’s a solid chance that they end up at .500 entering January with a chance to sneak into the playoff field.

— If you’re the Las Vegas Raiders, you need to revamp the offense now that it’s impossible to take the top off the defense in the same way you used to.

— Ohio State and Michigan both made pretty big statements in the week leading up to The Game. Head says OSU takes this one yet again, but heart says Michigan is as close as its been to getting this upset in a while.

— It’s Thanksgiving week in the U.S. and for the uninitiated, a popular tradition is going around and having each person say what they’re thankful for...I know I’m just the football guy, but I’d encourage you to take a few moments right now and think about some of the ways your life is enriched by the people around you. It’s not just an exercise in “warm fuzzies,” studies have shown that the simple act of gratitude can have a tremendous impact on your mental and physical wellbeing.

“I would maintain that thanks are the highest form of thought; and that gratitude is happiness doubled by wonder.”—G.K. Chesterton