NFL Offseason Notebook: Combine Thoughts & More
Head of Content & Marketing Michael Schottey gives us his thoughts on the NFL Scouting Combine and the rest of this week's NFL news and rumors. 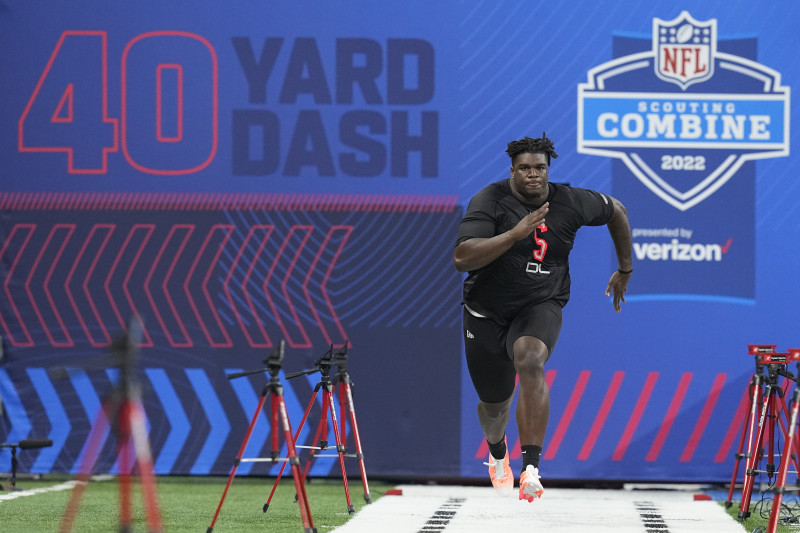 The NFL Scouting Combine is so overrated, it’s underrated…

I have the same thought every year. It comes from the dichotomy on my Twitter feed between the breathless watching of 40 times and the endless shouting that 40 times don’t matter. One group will invent new and crazy metrics for everything draft related. The other will just shout “meaningless!” at any adult male in spandex for the better part of five months.

And, while this contrast exists very much on Twitter, it’s important to note that it also exists, you know, inside my very own head, because there are ways in which both sides are extremely correct. We had some of the fastest 40 times in history at this year’s combine and yet, when you look at the fastest 40s in history like John Ross, Dri Archer, Rondel Menendez and more…you begin to remember that speed isn’t the only factor at play.

So, the combine is absolutely important. It allows teams to medically clear players in a controlled setting, put players on an even playing field away from the creature comforts of home and get true athletic ratings on smaller school guys. However, it’s best to think of the combine for the vast majority of players as the little 1 to 5% completion to their draft profile. For some guys it becomes more. For some teams, a combine performance will get overblown. Other than that though, the combine is a public display of a lot of things people who followed these prospects already knew.

With that in mind…some quick thoughts:

While much of the talk about about the big tackle Jordan Davis (more on him in a bit), the most impressive showing may actually have been from defensive end Travon Walker. I felt like I had him a little low in my mock at No. 26 to the Tennessee Titans. Now, there are talks that he just moved into the conversation for No. 2 overall.

Davis, meanwhile, set Draft Twitter ablaze with his 4.78 40-yard-dash at 341 pounds. That’s insane. I coach football in Florida, at a pretty decent sized school with guys who are state-caliber sprinters. Davis would immediately be the second or third fastest guy on my team after a defensive back and the quarterback. That’s crazy. He’s a mountain worth of man. He probably solidified a Top 15 pick for himself.

We spent some lengthy time on this week’s Three & Out talking about Oregon defensive end Kayvon Thibodeaux just up and walking out of the Combine after putting up a solid performance. For a guy who has had concerns about his motor and desire to play footbal, it was not a good look.

I’ve been around the Draft long enough to know that there are dozens of these stories that come and go without actually mattering. A decade later, you hear the guy was fighting a nasty cold or tweaked his ankle and didn’t want to tell anyone. Or, sometimes it does mean something, and you get a guy who got all pissy about a time that was two-tenths slower than he thought it was going to be and he threw a tantrum. This could be either.

The point is? We don’t know…until we know. Teams will have to make that decision for themselves. He’s still, almost certainly, a Top 5 to 7 player.

While (too) many spent the week talking about Pittsburgh QB Kenny Pickett’s undersized hands, the real story out of the combine is the performances of Liberty’s Malik Willis and Cincinnati’s Desmond Ridder. Neither is a complete prospect. Both have a lot of work that needs to be done. Yet, both threw very well on a level playing field and reportedly impressed teams with their poise and maturity in interviews.

Willis was even caught in an unscripted act of kindness that isn’t going to move him up any draft boards, but probably should.

This QB class was always going to come down to preference, but following a fantastic Senior Bowl and now combine, Willis is starting to separate from the pack with Ridder not far behind.

The Schottey Six: Potential QBs for the Washington Commanders

Washington is apparently canvassing the entire league looking for another quarterback, even reaching out to teams like the Kansas City Chiefs to inquire about the availability of Patrick Mahomes. In no particular order, here are some options…

1. Malik Willis (Liberty) — FedEx Field is about a four hour drive from Liberty University and Willis would not need to worry about overthrowing Terry McLaurin.

2. Jimmy Garoppolo (49ers) — At only 30, Garoppolo has a lot of good quarterbacking left, but he’s going to have his choice of teams and Washington’s recent drama may not appeal to him.

3. Mitchell Trubisky (Bills) — This feels like a solid fit from both angles, but the Commanders would almost certainly frontload this contract and pair him with a mid-round QB to hedge their bets.

4. Deshaun Watson (Texans) — This is the best case scenario in a lot of different ways, but it would likely involve the Commanders getting some sort of protection from Watson’s legal issues.

5. Taylor Heinicke (Commanders) — There is a real chance that the Commanders go into 2022 with Heinicke still at the helm, and that’s OK. You just need to modify the offense to not be so reliant on the deep ball.

6. Aaron Rodgers (Packers) — After Watson, this would be the motherlode. It would be a short term rental, but if Rodgers decides he wants to play there, the Packers would make it happen and reap the benefits of the draft capital.

— If we’re talking “Combine Winners,” you have to include my good friend Mike McCartney of Priority Sports. After Indy, there’s a good shot that his clients Ikem Ekwonu (OT NC State) and Aidan Hutchinson (DE Michigan) are going 1-2 in the NFL Draft. At worst, they should both go in the Top 5.

— The big news of the week is the year-long suspension of Falcons WR Calvin Ridley. During his time away from the Falcons last season, he allegedly engaged in sports betting which is apparently a no-no for NFL players even though the NFL is getting ridiculously rich off of the same thing. I get why the NFL doesn’t want players to bet on games they’re in, but the idea that he could’ve affected an outcome is silly. I expect an appeal and the NFL to uphold their own suspension.

— The NFL’s 2022 salary cap is officially $208.2 million. That number was kept artificially low last year due to COVID and is likely to increase by leaps and bounds over the next few seasons as the NFL’s new TV money rolls in.

— Just as we saw more shorter term deals last year due to the uncomfortable financial situation, expect more backloaded deals this year. A huge cap number set today for 2025 may look like a ridiculous deal when that year actually rolls around.

— As we await the rest of the Franchise Tag news today, remember that the tag isn’t meant to be “instead of” a long-term deal. It’s meant to be a placeholder for a deal to get done. Does that happen every time in reality? No, but a tag shouldn’t send the public into a tizzy.

— Excited for my buddy Andy Schwarz who is a sports economist and sometime member of the sports media scene. He’s Kickstarting his board game, “Envelopes of Cash” which brings the world of the college football bagman to the tabletop game scene. I’m excited to be an early supporter and my likeness may be in the game upon launch…

— I spent the weekend at a Coaching Clinic and will be heading to another in the upcoming weekend. One of the real underreported trends in sports is the mass exodus from Florida high school coaching. I made $2,000 last season as an assistant and my head coach only made $4,000. While last weekend’s clinic was in Orlando, it was packed with coaches who had “escaped” Florida and are making 10-15 times their former salary in states like Georgia, Alabama and North Carolina. Florida has some of the best homegrown athletic talent in the country, but something has to be done if they want to keep their best coaches.

— “The champion makes his own luck” –Earl Blaik