Can the Colts actually make the playoffs? Will the Patriots blow out the Jets? Find out in this week's picks. 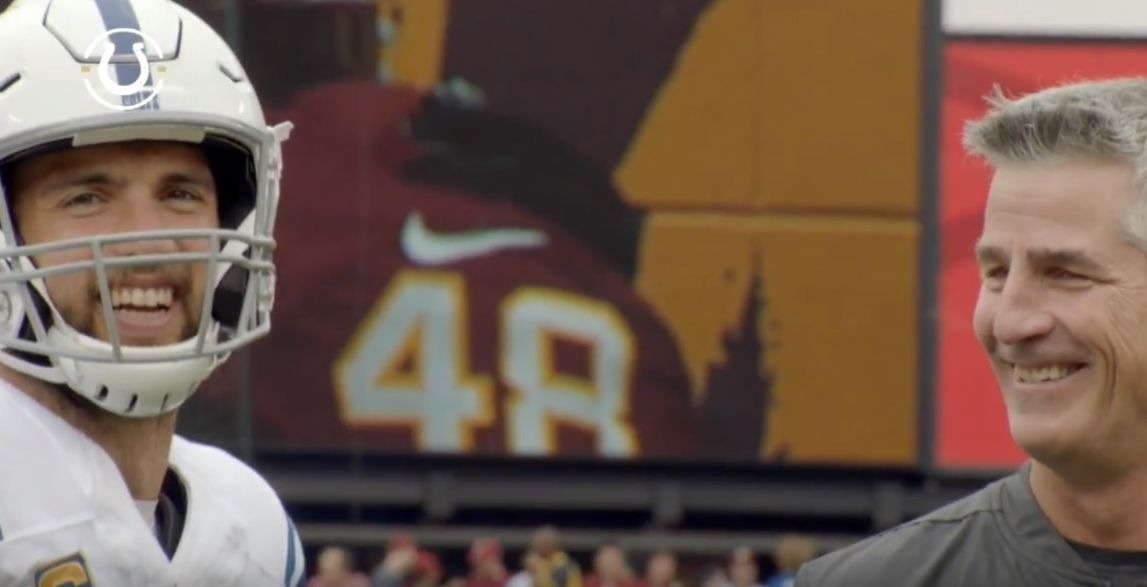 Can the Colts actually make the playoffs? After starting the season with an uncertain Andrew Luck, who missed all of last season with a shoulder injury, and with people wondering if he could return to elite quarterback status—and then going 1-5 in its first six games this year—Indianapolis has roared back into the playoff picture.

Luck has been awesome. The offensive line has been just as good and hasn’t allowed a sack in five games. Tight end Eric Ebron has reemerged. And the defense has been stout during the four-game winning streak.

All of which means it’s quite possible the Colts are in line for a postseason run. But can they get there?

For now, they’re 5-5 and tied with the Titans for second place in the AFC South, two games behind the 7-3 Texans, who are on a seven-game winning streak of their own. Indianapolis’ schedule for the rest of the season features six games, all of which are winnable, especially with the way the Colts have been playing lately.

They’ve got three division games remaining along with matchups vs. the Dolphins, Giants and Cowboys. At this point, I’d make the Colts the favorite vs. all three non-division opponents, particularly since they’re all taking place in Indianapolis. Considering there are no overwhelminginlgy good teams in the AFC South—I’m still not completely on board with Houston—the Colts could sweep those three intra-division games as well, finish the season 11-5 and probably win the AFC South.

It’d make history. As the Indianapolis Star points out, the only other team that started a season 1-5 and then made the playoffs since the NFL went to its current division format was the 2015 Chiefs. The other 54 teams who started 1-5 did not.

Here’s the problem, though. All three of the AFC South games it has remaining are on the road for Indianapolis. Sure, maybe the Colts will win one of those games, but to win all three away from indy would be a massive undertaking. I guess the real question is whether Indianapolis can go 9-7 and if that’d be enough for the postseason. For me, the answers are yes and probably so.

And considering Indianapolis’ state of mind at the start of 2018, that’d be a pretty darn good season for the Colts.

1)Bet your life savings on this game*

After beating the Colts 42-34 in Week 6 to even their record at 3-3, the Jets have been horrendous. Their offense can’t score on anybody (in three of the past four games, they’ve scored 10 points or less) and in their last game, they gave up 41 points to that offensive juggernaut, the Bills. So, things aren’t going great for New York. The Patriots, meanwhile, have been good for most of the year, and even though New England would probably be my fourth Super Bowl choice out of the AFC (behind the Chiefs, the Chargers and maybe the Steelers), the Patriots are still way too good for the Jets to have much of a chance. Yes, New England is 2-3 on the road this year, but it’ll easily knock off New York.

Against the spread: Patriots -9.5

You know why this game scares me? Because I don’t know how I feel about the Panthers. I picked them to beat the Lions in last week’s “Bet your life savings game,” and that didn’t go so well. Cam Newton is battling through an ankle injury, and Carolina is in a stretch where it’s playing four out of five games on the road. The Panthers are at home this week, where they’ll have to contend with the stellar play produced thus far by Seattle quarterback Russell Wilson, who has willed his team to a 5-5 record and a shot at an NFC wild card spot. But in this game, the Panthers have more offensive weapons, and after losing two straight, they absolutely need a win this week. I think they’ll get it.

Against the spread: Panthers -3.5

After a long weekend of eating turkey leftovers, this will be a nice little dessert for you on Sunday night, as these two teams battle to keep pace in the NFC North. Both still have work to do to catch the Bears for first place, but the loser of this game will pretty much be finished contending for the postseason. I keep expecting the Packers to play like the Packers we’re used to, but we simply haven’t seen it this year (which is probably why coach Mike McCarthy is in danger of losing his job). Minnesota hasn’t been overly impressive this year either, but considering the Vikings have won four of their last six games and considering they’re at home against a division rival, I’ll go with Minnesota to win by a field goal.

Against the spread: Packers +3.5