Editor's Note: KC Joyner will be joining Pickwatch for our 9th season of tracking NFL picks. A trailblazer in football science with an impeccable pedigree at ESPN and in the NFL, KC will be writing a weekly Pick'em article exclusively for our readers. Here, KC introduces himself and his approach to picks.

Prior to the 2014 season one of my ESPN editors asked if I would like to join the NFL picks group. He said all that was required was to select a winner for every NFL game every week. No point spread, no over/under, no upset specials - just predict who you think is going to win every game each week.

This sort of thing seemed to be right up my alley, being one of the pioneers of the NFL analytics revolution. I started my career by quitting my telecom consulting job in 2003 and taking 18 months to research and write a Bill James-style book titled Scientific Football 2005. I sent copies of that tome to various NFL editors and writers across the country, one of whom was the legendary Paul “Dr. Z” Zimmerman of Sports Illustrated.

Dr. Z liked the book so much that he called me up, did an interview to get some background on how I researched it, and wrote a story about all of this for SI.com. That post was a once-in-a-lifetime career break, as it led to multiple NFL teams buying editions of the Scientific Football book series, working with NFL agents on player contract negotiations, and what turned out to be a 14-year tenure with ESPN writing about the NFL, fantasy football, college football, and the NFL draft.

Applying that analytical research background to straight up picks worked like a champ, as over the past six years my 65.14%-win rate in straight up picks is the second highest among NFL analysts with 1,600 or more picks in that span.

Since Pickwatch posts the analysts with the highest win percentage on its social media accounts every week, I saw a lot of their posts on my Twitter notifications feed and eventually got in touch with the company’s founder, Shaun Lowrie.

Over many Twitter and video conference conversations, Shaun and I found that we had a lot in common, as he is a pioneer in the picks world who started off with some Excel spreadsheets and a passion for football and statistical tracking and found a way to turn that same style of analysis into a successful business.

Now that I am on the independent path post-ESPN via my fantasy football-centric website, thefootballscientist.com (use the discount code "PICKWATCH" for 10% off any subscription on that site), Shaun and I had conversations over the past few months about joining forces, so I will be posting my weekly NFL picks exclusively on Pickwatch. I will do this via articles that detail the reasoning behind every selection and thus share with Pickwatch readers the analytics and mindset that drives each choice.

Pickwatch readers can then use this analysis to augment their own selections both on Pickwatch using the awesome new Pickwatch Coins, and winning bigger money via DraftKings.

The largest win margin in NFL history was when Chicago beat Washington 73-0 in the 1940 title game. Keep that in mind when considering that you can click here to get an insane spread of +101 for the Chiefs in week 1 (no, that isn't a typo!) as an introductory offer. You can only put $50 on at -110, but it's basically a free $45! 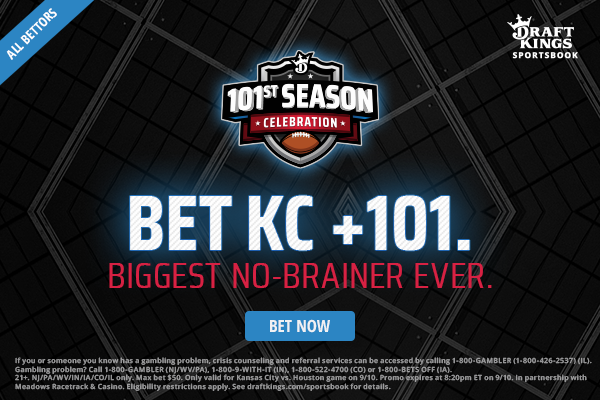 Anytime I talk with someone about NFL picks, one question invariably gets asked – What’s your system for picking games?

There really isn’t a cut and dried answer here, as there are myriad elements that go into deciding which team to choose in a given matchup, but in the 17 years I have been covering the NFL I have found three key rules that work quite well in identifying winners.

Bill James wrote an article in one of his classic Baseball Abstracts about the differences between baseball, basketball, and football. In it he made a very interesting point about baseball being the most unpredictable of those sports because, to use his words, “form does not hold.”

For example, if the Detroit Tigers are the worst team in baseball and the New York Yankees are the best team and the Tigers travel to Yankee Stadium for a four-game series and win one of those contests, that victory isn’t considered anything close to newsworthy. Bad teams win at least one matchup of a series against good teams all of the time in Major League Baseball and therefore it isn’t considered a notable item.

Now apply that to the NFL. Last year the Cincinnati Bengals were the worst team in the league and had four combined games against Baltimore, San Francisco, and New England. The Bengals of course went 0-4 in those matchups, but had they actually won any of those battles, it would have been one of the main stories on every sports show that week and featured as the centerpiece of the Bengals 2019 NFL Films highlight reel.

The reason for this disparity of expected outcome is because, as James noted, football games hold to form a large percentage of the time due to the relative scarcity of contests. Baseball teams have the luxury of long schedules to help offset losses and therefore don’t have to go all out to win every contest. Football teams have much shorter schedules and thus find it necessary to often preach victory at all costs. It’s why this sport has stories such as Brett Favre playing with every manner of injury imaginable during his 297-game consecutive start streak.

This is the reason analysts should always select the better team in a football pick contest, as it gives them the advantage of being on the side of holding to form.

The problem in doing this is what is the best determinant for identifying the better team in a given matchup? There are some basic factors such as won-loss record that can serve this purpose in many instances, yet in other cases there are more reliable factors. As the season progresses, I will cover a lot of these alternate dynamics in my picks articles and share those insights with Pickwatch readers.

Find the best tiebreaker to fit the situation at hand

So, what is an analyst to do in the event that it isn’t clear which is the better team? This situation comes up very frequently, especially early in the season when clubs are still defining who and what they are going to be for the rest of the campaign.

That’s where effective tiebreaking elements come into play. There is no one size fits all approach here. Home field works sometimes. Going with the team with the better quarterback can be a solid decider. On some occasions the best move is to go with the team that is playing at a higher level over the past few weeks. Other times going with the healthiest team is a good path to choose. Or it could be the team that has more to play for, or the one that is blocking and tackling better.

The key is to know which one of these to use in a given situation. This is something I will come back to frequently during the season, as it is a primary element in staying ahead of the pack.

In 2017, Miami traveled to Baltimore in Week 8 to play a Thursday night game. The Dolphins had a 4-2 record versus the Ravens 3-4 mark and thus might seem to be the better team, but many aspects of my analysis for this contest strongly pointed towards Baltimore being the better team and thus worthy of the pick.

I normally would trust that research and select the Ravens, especially since it was a short week road contest for Miami, but I decided to ignore it for the worst reason – I was a couple of games behind some of my ESPN cohorts and most of them selected Baltimore, so I wanted to close the gap by choosing this contrarian pick.

It was a foolish mistake on my part for two reasons. First, I know from years of working in the football analytics field that you should always trust the process. If the analysis says lean towards this pick, trust it. A lot of time and effort went into that research and it should not be bypassed for specious purposes.

The other error here was chasing games. Instead of waiting for the right upset pick occasion to close the gap, I decided to chase after a low percentage play because I didn’t want to be patient and wait for that better opportunity.

There was a silver lining to this cloud, as it served as a reminder of the cold reality that this is a play the percentages environment. That chalk heavy mindset comes across to some as boring and I hear about this quite often on Twitter, as fans want to be able to call out upset picks, but that’s not what wins a top spot among analysts. If the analysis calls for an upset pick, by all means make it, but otherwise do yourself a favor and ignore the chatter and any impulse you might have to chase the excitement of upsets. Go chalk all the way and reap the rewards.

You can apply this chalk mindset to your own picks after signing up for a DraftKings account, again, you'd be crazy not to at least take advantage of their free money with the +101 spread on KC in the opener that you can find in their promotional offers page after you sign up and make a minimum $5 deposit.