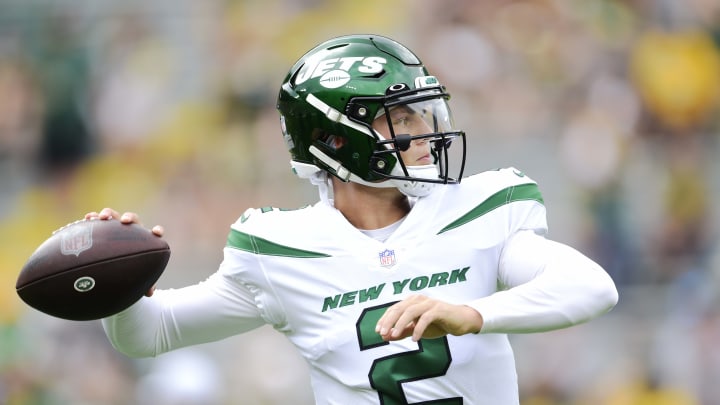 The Jaguars have reportedly asked to interview just about everyone for their head coaching vacancy at this point, and while it’s an attractive job because of quarterback Trevor Lawrence, the “nos” are already rolling in.

The Lions have been in almost every game this season regardless of poor quarterback play or massive injury/covid issues. Still, the future has to be about more than just moral victories.

In a lot of ways, the Jets are in the same boat as the Lions. They’ve looked competitive in games this season but quarterback play has doomed them and the defense isn’t quite where this group of coaches might like it. The difference? Zach Wilson is a much-heralded rookie and isn’t going to have a ton of time past this year to prove he’s the dude.

If you tell me you had the Texans beating the Chargers this past week, you’re a liar and I will never trust you again.

About a year ago, I was in the stands at the Senior Bowl and was very impressed (from afar) with the energy of the Panthers coaching staff. That seems like decades ago, and that energy has not found itself rooted into the culture of this team.

The Bears should be able to rout the Giants this weekend, which might end up saving Matt Nagy’s job, and that’s not a good thing.

My Three & Out cohost Ty Schalter has called this Falcons team the “Best Bad Team Ever,” which might be true, but they’re still most certainly a bad team.

John Madden’s legacy helped give this franchise an identity for decades to come. Their next coach will need to help find a new identity, because this iteration of the team does not have one.

Anyone blaming Mike Tomlin for the Steelers’ issues this season hasn’t been paying attention for very long. This is a bad team with a bad quarterback and it’s hard to preach accountability when a very bad Roethlisberger remains under center because there aren’t any better options.

The Seahawks probably deserve to be much lower than this, but while the team is flat and listless, there’s still plenty of talent out there. This week’s game against the Lions will tell us a lot.

WFT is probably punching up two or three wins above their talent level, but that’s not good enough for a team that was supposed to take a big leap forward this season.

The Eagles are better than casual observers think, because a lot of their success comes from the trenches. Their skill position players let them down a lot and the quarterback play is merely average, but the building blocks are there.

I could quarterback a game for the Saints and it would still be a close loss because the defense is just that good.

The Broncos defense had been good all season long, but statistically has just started to come to the lead in major metrics like points per game. That’s a good thing, because this offense sucks.

I’m confident that this team could play the best team in NFL history and a local Pop Warner team and find a way to lose both games on a last-minute drive.

I’ve come to see the Browns as the platonic ideal of NFL mediocrity. If it looks like they’re getting too good, they’ll slump. Too bad? They’ll pull out a big win.

The Ravens were hit by massive injuries right before the season and played well through it before the added amplification of COVID took its toll. Still, it’s hard to believe the defense is that bad.

People point out a lot that the Dolphins are a dink-and-dunk offense (and they are) but when you pull out the yards that the ball travels through the air on each passing attempt, Tua Tagovailoa actually is going down field at a higher average clip (4.2 air yards per attempt) than Aaron Rodgers (4.0), Ryan Tannehill (4.0), Taylor Heinicke (3.9) and more.

The Chargers falling down face flat at the end of an NFL season is nothing new, but this season, they have COVID as an excuse and it hit them REALLY hard last week. Still, it was the Texans, guys!

The Niners are a tough team that got out-toughed by a tougher team. Now, it’s looking like we might see QB Jimmy Garoppolo gut through a hand injury OR it’s the Trey Lance show. Either way, things are looking down.

The Titans are doing their best to save a Derrick Henry-less season, and winning games with most of/the entire offensive line sitting out is a heckuva way to show you’re more than one man.

The Bengals have more talent than their record shows, and that’s going to be a problem if they can’t figure out some things before the playoffs.

Beating the Patriots in the second game of the season matchup seemed like getting a big ol’ monkey off their back. Now, they’ve got Falcons and Jets which seems like a heckuva Christmas gift.

I’ve said it all season, if I were coaching in the NFL, the Colts are the last team I’d want to see. Now, they’ve won six of their last seven.

Bills fans are going to hate that the Patriots are still ranked higher here, but I still like New England to tighten up and make some noise in the playoffs with that run game and defense.

Can the Cardinals put up a fight against the suddenly most explosive team in football? If not, they’re going to tumble pretty far down this list they used to be atop.

Many of the players who make the Buccaneers so fearsome are done for the regular season or longer. They’re still a Super Bowl contender, though, which has a lot to do with Tom Brady.

Awfully tempted to put the Cowboys at No. 1 this week because they’ve got the best all-around team in the league.

The Rams have learned to win even when Matthew Stafford has a terrible game. This is scary news for the rest of the playoff contenders.

The offense still steals the headlines in K.C., but the defense is pulling more than their fair share in a big way.

The best team in football is getting their best defender, CB Jaire Alexander, off of IR. This is a team ready to rock and roll.