NFL Power Rankings Week 3
This week two teams rise 8 places, find out who the week's biggest winners and losers are with Keegan Hagler. 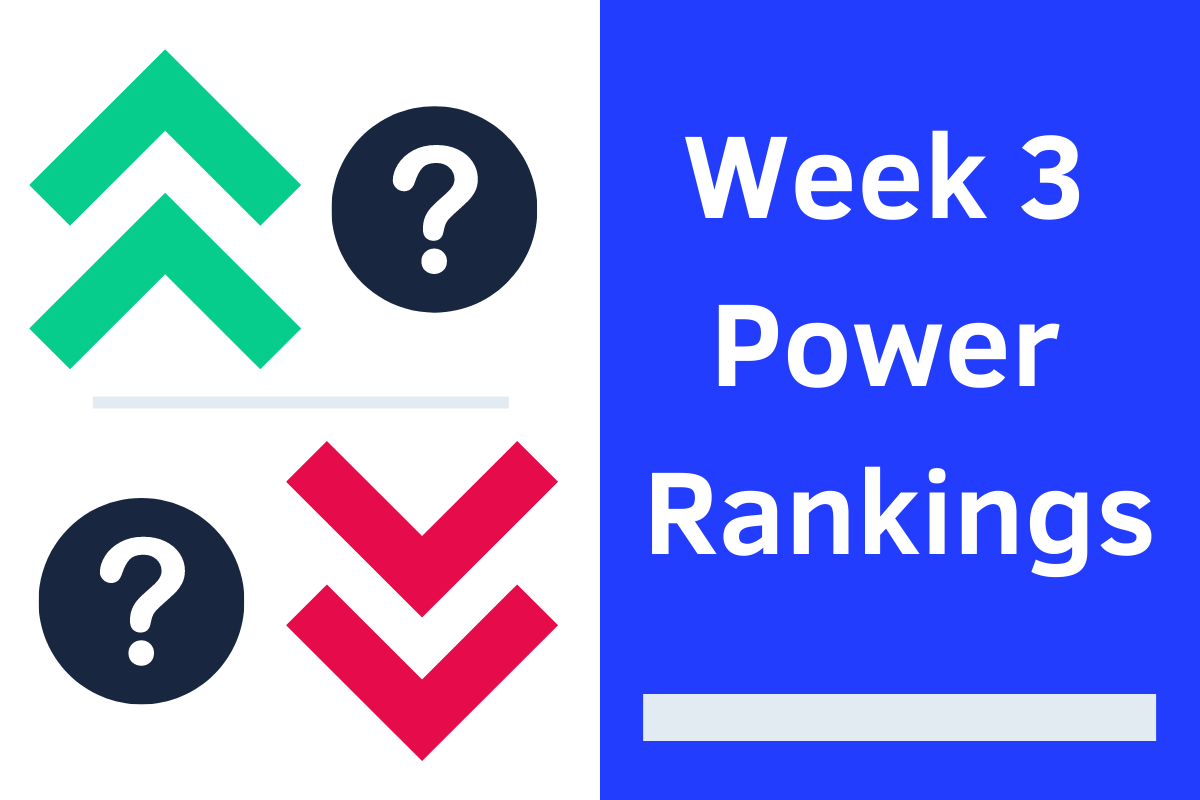 The Bills left no doubt over who the best team in the NFL is after their annihilation of the Titans on Monday Night. The offense is unstoppable and the defense is among the best in the league.

No movement from Tampa in the rankings. They took care of business against a division opponent, and the defense looks better than ever. I think the offense will be much improved when the receivers get healthy.

Chiefs keep their #3 spot after an impressive win against the rival Chargers, although it wasn’t perfect. Mahomes almost threw a couple of picks, but nevertheless they were able to get a win.

Rodgers still owns Chicago, and perhaps we overreacted after Green Bay’s week 1 loss to the Vikings. The defense looks like they might be as good as we thought, and I have faith that the offense will figure it out.

The most disappointing thing from the Chargers on Thursday was Brandon Staley’s lack of aggressiveness on 4th down, as that has become his hallmark. I would even argue that he cost his team the game, along with Herbert’s devastating pick-6 in a goal-to-go scenario.

Philly has a legit argument as the best team in the NFC after their beatdown of the Vikings on Monday Night. Hurts looks like the future of the franchise, and the defense is rolling right now

Despite the win, the Rams still move down a spot in the rankings. I still have concerns about the defense, and there was no reason to let the Falcons back into that game at the end.

The Dolphins were probably one of the most impressive teams this weekend, with Tua in particular having an outstanding performance. Down 21 in the 4th quarter, he threw 4 TDs in the 4th and led the Dolphins to a 42-38 victory on the road in Baltimore

It wasn’t pretty, but Denver did get the win against Houston. For all of the offensive problems going on right now, the defense is still balling, allowing 13 PPG through 2 weeks.

San Francisco is one of the biggest risers of the week, and a lot of it is because of the upgrade they made at QB following Lance’s injury. Garoppolo projects as a top 16ish starting QB, and the offense will be much better with him in there as opposed to the sophomore.

As banged up as the secondary was, there was still no reason for Baltimore to be allowing 6 passing touchdowns to Tua Tagovailoa and the Dolphins. Lamar played out of his mind, but the defense has some of the same issues as last season it would appear.

Following a week in which Minnesota was one of the most impressive teams in the league, they were one of the more disappointing teams in week 2. Kirk threw 3 picks as the Vikings were dismantled by the Eagles on Monday Night.

Another tight loss against an inferior opponent for Cincinnati, as they drop to 0-2 on the season. Burrow did look a little better, but not back to his 2021 self just yet. Regardless, a loss to Cooper Rush just is not acceptable.

Through the first 2 quarters in Vegas, it looked for a second like the Cardinals were going to be an absolute dumpster fire this season. Luckily, Kyler Murray and the crew were able to turn it around in the second half and rallied to an OT victory against an

When Chubb scored the touchdown in the final 2 minutes, Cleveland had a 99.9% chance of winning that game. Unfortunately, Joe Flacco had other ideas. Jacoby Brissett actually looked pretty good, but the defense let him down late in the game.

So much for the defense having a bounceback season. Del Rio’s squad looked as incompetent as they did last season, and the offense did too little, too late to make this a close game. Just was never close in Detroit on Sunday

Wasn’t a very interesting or fun game, but the Patriots got the job done against Pittsburgh to move to 1-1 on the season. The offense looks just as concerning as before, but the defense looks like it can be pretty solid this year

There have been few teams in the NFL more disappointing than the Raiders so far this year. They had a 20-0 halftime lead over the Cardinals and proceeded to squander it and lose in overtime. Davante Adams was held to 2 catches for 12 yards against the atrocious Arizona secondary

The Saints lost to the Bucs but stay at 19 in my rankings. The defense looked great on Sunday, and the offense was about what I expected. New Orleans hung with Tampa for the majority of that game, but Winston’s 3 picks were hard to overcome.

What is going on in Indy? I know I was low on them to start the season, but I didn’t think they’d be THIS bad. There are genuine questions as to who is the better team between them and Jacksonville, and head coach Frank Reich is definitely on the hot seat as of right now.

Nice win for Detroit against a solid Commanders team, as the offense looked almost unstoppable for the majority of that game. I still do worry about the defense, but if rookie pass rusher Aidan Hutchinson can follow up his 3-sack performance with another good one, Detroit could potentially be a scary team in the NFC.

The Jaguars just might have both the best QB in the AFC South and the best coach in the AFC South. An absolute beatdown of the Colts on Sunday, shutting them out 24-0. Lawrence ranked as my 5th-best QB performance of the season, and his breakout season might just be here.

Dallas moves up 1 spot after a close win against Cincinnati. When Dak went down, many wondered whether the Cowboys would trade for a veteran backup QB, but Cooper Rush was able to get the job done, outplaying Burrow and leading them to a 20-17 victory.

This Pittsburgh offense is just so sad to watch. We should probably get used to their scores being in the teens for the rest of the season. Only a matter of time before we see Kenny Pickett in there.

A nice 2-0 start for the Giants, but is anyone actually convinced that this is a good team? They won close games against Cleveland and Tennessee, and QB Daniel Jones hasn’t really shown many signs of improvement yet. Strength of opponent and margin of victory do matter in these rankings.

Absolute disaster for Tennessee on Monday Night. The Bills dismantled them in every way, and we saw Malik Willis in at QB before the end of the game. I have a feeling that he might be starting at some point this season, and coach Mike Vrabel may not be around at the end of the season either.

I have no words for what the Jets just did. In what will likely go down as the most improbable victory of the season, NYJ scored 2 touchdowns,and recovered an onside kick in between, in the final 2 minutes of the game to erase a 13-point deficit and get the win. Does that mean that they’re a legit team though? I think we still need to see more.

A disappointing start to the season for Carolina, as they dropped 2 games against below average opponents. I think Matt Rhule probably ends up being the first coach fired this year, which leaves the question of what happens to Baker Mayfield, who’s been pretty bad thus far.

There’s the Bears we all know and love. They go into Green Bay and lose by 17, and the offense just looks atrocious. Not sure why Justin Fields only threw 11 passes, considering they were losing for the majority of the game.

The Texans moved up this week, but not because of anything they’ve done. It was more about Seattle being bad and regressing to their mean, although Houston didn’t look too good either. The bottom-feeders of this league are starting to separate themselves from the rest.

Wow. What a fall from grace for Geno Smith. The Niners, who lost Trey Lance early in the game, handled Seattle with ease, cruising to a 27-7 victory. Geno was bad, and I have a feeling that this is the Geno that we’ll see for the rest of the season.

Atlanta stays at 32 after failing to get a win for a second straight week. I credit them for fighting back after being down 28-3 to the Rams, but this is just not a good football team. The defense can’t stop a nosebleed, and the offense just lacks playmakers and can’t get the ball to the few that they do have.